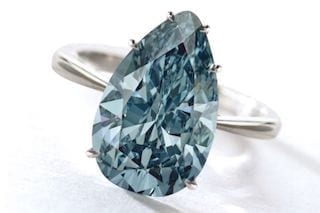 Discoveries of noteworthy gems have increased in recent years, but blue is still by far one of the rarest diamond colors.

A rare blue diamond is expected to sell for $7 to $9.6 million at a Hong Kong auction scheduled for Tuesday (October 3).
The pear-shaped, 5.14-carat, fancy deep blue, SI1-clarity gem will be the centerpiece at Sotheby’s Magnificent Jewels & Jadeite auction, Rapaport reported. It is mounted on an 18-carat white gold ring, and if it is sold within the expected range it will be valued at $1.9 million per carat.
Blue is one of the least common diamond colors, and blue diamonds tend to sell for extremely high prices. The stones are found in only a few mines around the world, including the South Africa-based Cullinan mine and the Argyle mine in Australia. Like all diamonds, blue diamonds are made primarily of carbon, with boron and nitrogen impurities causing their blue color.


Give me my free report!
Sotheby’s doesn’t mention where the blue diamond up for auction was found, but it’s worth noting that the discovery of significant diamonds has been on the rise in recent years. In fact, according to independent diamond industry analyst Paul Zimnisky, 66 “noteworthy” diamonds have been recovered in the last nine years, with 61 of those being found in the last five years.
Zimnisky describes “noteworthy” diamonds as those “considered special enough that the company that discovered them subsequently issued a press release to announce the occasion.” He points to Lucara Diamond’s (TSX:LUC) November 2015 press release announcing the discovery of the 1,111-carat Lesedi La Rona diamond as a good example. The gem recently sold for an impressive $53 million.
Other examples include a 27.85-carat pink diamond recovered by ALROSA (MCX:ALRS) this year, and a 29.6-carat blue diamond recovered by Petra Diamonds (LSE:PDL) at the Cullinan mine in 2014. As mentioned, Cullinan is known for producing blue diamonds.
Rough diamond prices have remained steady so far this year, but as Bloomberg states in a recent article, diamond stocks have fared poorly. They have been affected by a range of issues, including mine setbacks, political troubles and low prices for some gem types.
“There’s definitely this oversold status with the diamond market,” Lucara CEO William Lamb told the news outlet. “I’m waiting for the point where everybody starts to realize that the diamond sector has actually been ignored and the investment opportunity is actually quite significant.”
Additional highlights of Sotheby’s Magnificent Jewels & Jadeite auction will be a pair of pear-shaped fancy pink diamond earrings with an estimated price tag of $3.8 to $5.1 million. A 13.26-carat ruby and diamond ring will also be up for grabs for an estimated price of $3.8 to $5.1 million.
Image courtesy of Sotheby’s.
Don’t forget to follow us @INN_Resource for real-time updates!
Securities Disclosure: I, Charlotte McLeod, hold no direct investment interest in any company mentioned in this article.