February 8, 2017 – Vancouver, BC, Canada. – Dunnedin Ventures Inc. (TSXV:DVI) today reported the Company’s first diamond recovery results from the Kahuna kimberlite.  The 144.44 kg sample of Kahuna returned 13 commercial-sized stones (+0.85 mm) totalling 0.334 carats, for a sample grade of 2.32 carats per tonne. The largest recovered diamond was a 0.12 carat clear and colourless twinned octahedral stone.  Results are provided in the table below.
Table 1: Diamonds recovered from the Kahuna kimberlite by Dunnedin 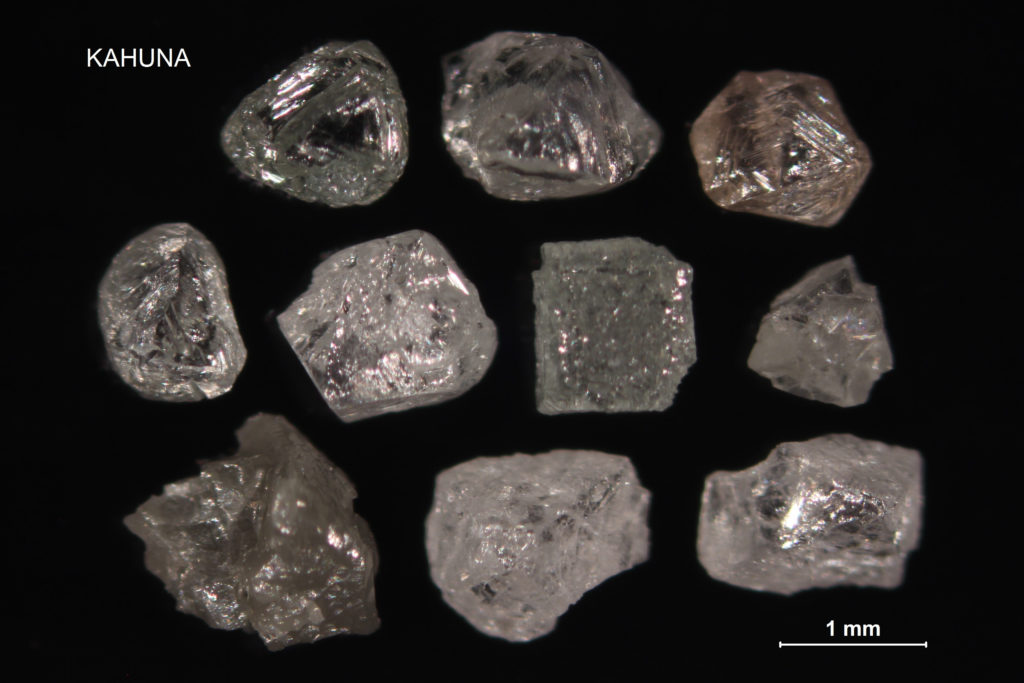 Chris Taylor, Dunnedin’s CEO said, “The Kahuna kimberlite is a large target with a maiden Inferred Resource of over 3 million tonnes, and potential for an additional 3.7 to 10.7 million tonnes at a range of depths.  Historical bulk sampling yielded 1.04 carats (+0.85 mm) per tonne, but audits to determine a final sample grade do not appear to have been completed by the past operator.  With this latest sample returning 2.35 carats per tonne, the Company is strongly encouraged by the size and grade potential of this kimberlite, and we view bulk sampling to determine diamond value as a priority.”
Details of an Inferred Resource and Target for Further Exploration have been published for the Kahuna kimberlite, both of which were completed by APEX Geoscience Ltd. and are available as a National Instrument NI 43-101 technical report filed on the SEDAR website (www.sedar.com) on March 12, 2015.  Mineral Resources are not Mineral Reserves and do not have demonstrated economic viability. The potential quantity and grade of any Target for Further Exploration is conceptual in nature, there is insufficient exploration to define a Mineral Resource and it is uncertain if further exploration will result in the target being delineated as a mineral resource.
Most of the Kahuna diamonds recovered by Dunnedin are clear and colourless variants of octahedra.
The Kahuna sample was treated through an autogenous mill-fusion circuit located at CF Mineral Research Ltd. of Kelowna, British Columbia, using a lower size cut-off of 0.425 mm.  Unlike standard DMS recovery methods, the circuit can recover nearly all diamonds present in a kimberlite sample to the predetermined cut-off size, along with associated indicator minerals.
Read the full company profile.
About the Kahuna Kimberlite

Dunnedin also recently announced that the Kahuna, Notch, PST and other kimberlites are emplaced within gold-mineralized metasediment belts that have historically reported gold in drill core, as well as pristine, locally-sourced gold grains in tills across a broad area contiguous with Agnico Eagle Mines Ltd.’s (TSE: AEM) development-stage Meliadine gold project (see news release, January 31, 2017) .
Mr. R. Bob Singh, P.Geo, Exploration Manager, is the qualified person responsible for the technical content of this news release.
For further information please contact Mr. Knox Henderson, Investor Relations, at 604-551-2360.
On behalf of the Board of Directors
Dunnedin Ventures Inc.
Chris Taylor
Chief Executive Officer
About the Kahuna Project
Kahuna is an advanced stage high grade diamond project located near Rankin Inlet, Nunavut.  Dunnedin is now recovering diamonds and indicator minerals from a series of kimberlite and till samples collected  during two seasons of field work.  An Inferred Resource released by Dunnedin showed over 4 million carats of macrodiamonds (+0.85 mm) at a grade of 1.01 carats per tonne had been defined along the partial strike length of the Kahuna and Notch kimberlite dikes through shallow drilling.  The largest diamond recovered was a 5.43 carat stone from the Kahuna dike which was a piece of a larger diamond that had been broken during the sample preparation process and was reconstructed as having an original size of 13.42 carats.  Recent results include a 0.82 tonne sample of the PST kimberlite dike which returned 96 macrodiamonds totalling 5.34 carats (+0.85 mm), a 2.36 tonne sample of the Notch kimberlite which returned 89 macrodiamonds totalling 2.38 carats (+0.85 mm), and a 144 kilogram sample of the Kahuna kimberlite that returned 13 macrodiamonds totalling 0.33 carats (+0.85 mm).  The Kahuna project is located adjacent to the development-stage Meliadine gold project of Agnico Eagle Mines Ltd and also hosts gold mineralization in metasedimentary units including a recently defined greenstone belt with over 40 kilometres of strike length that is associated with elevated gold-in-till results.
Connect with Dunnedin Ventures Inc. (TSXV:DVI) to receive an Investor Presentation.