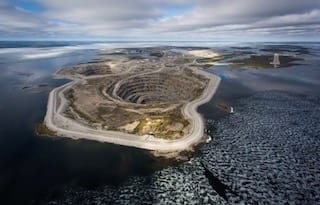 Dominion Diamond (TSX:DDC,NYSE:DDC), the third-largest diamond miner by market value, has agreed to a sweetened $1.2-billion cash takeover offer from Washington Corporations.
Almost four months after soundly rejecting WashCorps’ initial bid, Dominion said the US-based company will acquire all of its outstanding common shares for $14.25 each in cash.
WashCorps, a group of privately held mining, industrial and transportation businesses, upped its earlier bid of $13.50 per share made public last March. The new offer represents a 44-percent premium to Dominion’s closing price of $9.92 on March 17, the day before WashCorps disclosed its interest.


Give me my free report!
“This offer is the result of a robust strategic review process and the Board unanimously agrees that this offer represents the best option available to Dominion shareholders, and recommends that shareholders vote in favour of this transaction,” Jim Gowans, chair of Dominion’s board, said in a statement.
The deal, which still needs to be approved by Canadian authorities and two-thirds of Dominion’s shareholders, is expected to close in the fourth quarter of 2017.
Once completed, WashCorps will take a controlling interest in the Ekati mine and 40-percent ownership of the Diavik mine, both top diamond-producing mines in the Northwest Territories.
Ekati, which was Canada’s first surface and underground mine, has produced approximately 67.8 million carats since it began operating in 1998. The Diavik mine is operated by Rio Tinto (ASX:RIO,LSE:RIO,NYSE:RIO) and has produced 100 million carats since 2003.
According to independent diamond analyst and consultant Paul Zimnisky, Dominion’s share price was significantly undervalued earlier in the year, but this offer brings it “much closer to a fair valuation.”
“I think Washington is doing this deal because they see so much value, more so than because they want exposure to diamonds per se; but they must be comfortable with the longer-term fundamentals of the diamond industry as well,” Zimnisky added.
The diamond expert believes “the timing [of the deal] is good” as the market has returned for smaller brown colored goods, as the Indian manufacturing industry is recovering from demonetization. These gems are primarily produced by Ekati.
WashCorps also said it will keep Dominion’s headquarters in Canada and appoint a new CEO.
At 1:00 p.m. EST on July 17, Dominion’s share price was sitting at $17.81 on the TSX, up 36.97 percent year-to-date. On the NYSE it was changing hands at $14.05, up 45.14 percent since the beginning of the year.
Don’t forget to follow @INN_Resource for real-time news updates!
Securities Disclosure: I, Priscila Barrera, hold no direct investment interest in any company mentioned in this article.