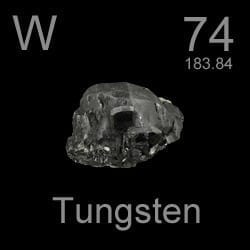 Tungsten uses include cemented carbide, alloys and more. Read on to learn about the metal’s key applications.

Tungsten, also known as wolfram, is a shiny, silvery-white metal with low reactivity and the highest melting point of all metals. It is also one of the heaviest metals with a density of 19.25 grams per cubic centimeter.
Tungsten is mined all over the world, though China leads the way in production — it put out 71,000 MT in 2016, much higher than Vietnam’s 6,000 MT and Russia’s 2,600 MT. Deposits can be found near orogenic belts, areas where tectonic plates have collided. These belts are located in places such as the Asiatic part of Russia, the east coast of Australia and the Rocky and Andes mountains.
Tungsten uses are extremely varied as the metal’s hardness makes it valuable for shaping everything from metals to plastics and ceramics. About two-thirds of tungsten is used for cemented carbide and other construction applications. It is also important for high-speed steels and creep-resistant steels and alloys. Additionally, the metal is used for everyday purposes; examples include the vibration alert in cell phones, light bulb filaments, electrical and electronic contacts, solar panels and window heating. Read on for a breakdown of the primary tungsten uses.

As mentioned, the majority of tungsten is used for cemented carbide, which is a hard material used in cutting tools for machining and other industrial applications. Cemented carbide, which is often referred to as hardmetal, is made by mixing tungsten monocarbide powder with carbon powder and heating the mixture to 2,200 degrees Celsius. This process results in a material with a hardness close to diamond.
Cemented tungsten carbide tools are used in the aerospace, automotive and construction industries as well as in oil and mineral exploration and mining. Applications for cemented carbide include wear parts (components added to resist impact, corrosion and wear in machinery), carbide rotator cutters and metal-forming tools.

After cemented carbide, the second-highest use of tungsten is in the making of high-speed steels and super alloys. High-speed steels have the ability to machine materials at high cutting speeds; they are complex iron-based alloys made from a combination of carbon, chromium, vanadium, molybdenum or tungsten, and in some cases a fair amount of cobalt.
According to ASM International, the world’s largest association of metals-centric materials engineers and scientists, the first research work on a 14 percent tungsten alloy in 1903 led to the development of the first high-speed tool steel, known now as T1.

Next on the list, mill products, such as tungsten rods, sheets, wires, light bulb filaments and electrical contacts, account for about 14 percent of tungsten use. The metal’s use in light bulb filaments has declined with the introduction of new lighting technologies, but tungsten mill products are still needed in a number of other areas.
“[T]ungsten mill products are also used in ammunition and armor, in the automotive and aerospace industry, as furnace elements, in electronics, as jewelry, in medical and nuclear applications, for sports equipment and as welding electrodes,” states Vital Metals (ASX:VML).

Finally, chemical industry applications are the smallest market for tungsten, with less than 10 percent of global consumption. However, a variety of tungsten compounds are used as lubricants, catalysts, pigments for ceramic glazes and enamels, as well as in electronics and electrical applications.
To be sure, tungsten is important for a variety of industrial and electronic applications that are key to modern life. Critical metals investors will certainly want to keep an eye on the market for tungsten.
This is an updated version of an article originally published by the Investing News Network in 2015.
Don’t forget to follow us @INN_Resource for real-time updates.
Securities Disclosure: I, Priscila Barrera, hold no direct investment interest in any company mentioned in this article.

See our exclusive index of Tungsten companies on the move
EXPLORE