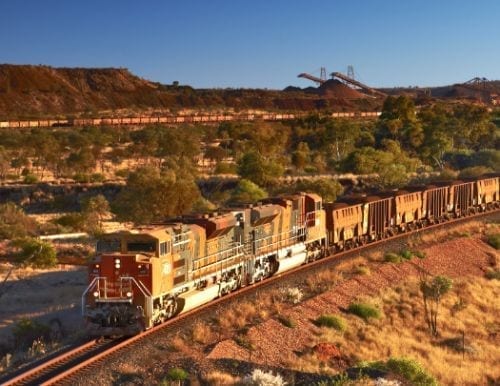 According to Mineral Resources, a train left the operation for Esperance to begin stockpiling ore in preparation for the company’s first shipment.

Mineral Resources (ASX:MIN) acquired the Koolyanobbing iron ore operation less than three months ago, and earlier this week announced that the first train loaded with iron ore had departed for the Port of Esperance.

Koolyanobbing, acquired from former operator Cleveland-Cliffs (NYSE:CLF) in late August, is located about 50 kilometers north of Southern Cross in the Yilgarn region of Western Australia.

According to MinRes, a train left the operation for Esperance to begin stockpiling ore in preparation for the company’s first shipment. That is expected to take place in the next four weeks.

The company says that the successful and safe loading of this train is an important milestone, as the ramp up of production at Koolyanobbing is now complete, with the asset hitting its targeted capacity.

“When we decided earlier this year to take on the Koolyanobbing operations previously operated by Cleveland-Cliffs Inc, we did so because of our firm belief we could sustain a viable iron ore export operation in the region and safeguard hundreds of jobs in regional Western Australia,” MinRes Managing Director Chris Ellison said in a statement.

He added, “[w]e look forward to building up our iron ore stockpiles at the port of Esperance ahead of loading our first ship before the end of this year.”

The first train consisted of 106 wagons carrying a total of 7,488 tonnes of iron ore fines. MinRes has attributed much of the progress made at Koolyanobbing to support received from the Western Australian government — specifically the Southern Port Authority, which helped modify the rail car dumper at Esperance to be capable of unloading the company’s bottom-dump rail wagons.

One response to “First Train Leaves Koolyanobbing Since MinRes Acquisition”