This Canex Metals profile is part of a paid investor education campaign.*

Legendary investor Warren Buffet once suggested that when evaluating stocks, one of the key factors investors should look at is a company’s management team. He said, “Look at what they have accomplished.”

CANEX Metals (TSXV:CANX) CEO Dr. Shane Ebert has been involved in the discovery of three notable porphyry and bulk tonnage style deposits and he hasn’t stopped there: the Bahuerachi copper porphyry deposit in Chihuaua, Mexico, which lead to the takeover of Tyer Resource in  2008; the Viking project in Newfoundland, which paved the way for Northern Abitibi Mining to be awarded the Prospector/Explorer of the Year Award in 2010 by the Newfoundland Branch of the Canadian Institute of Mining, Metallurgy and Petroleum; and Surge Copper’s (TSXV:SURG) Ootsa property in British Columbia, specifically the West Seel deposit, Ootsa’s larger zone of copper-gold-molybdenum-silver mineralization. 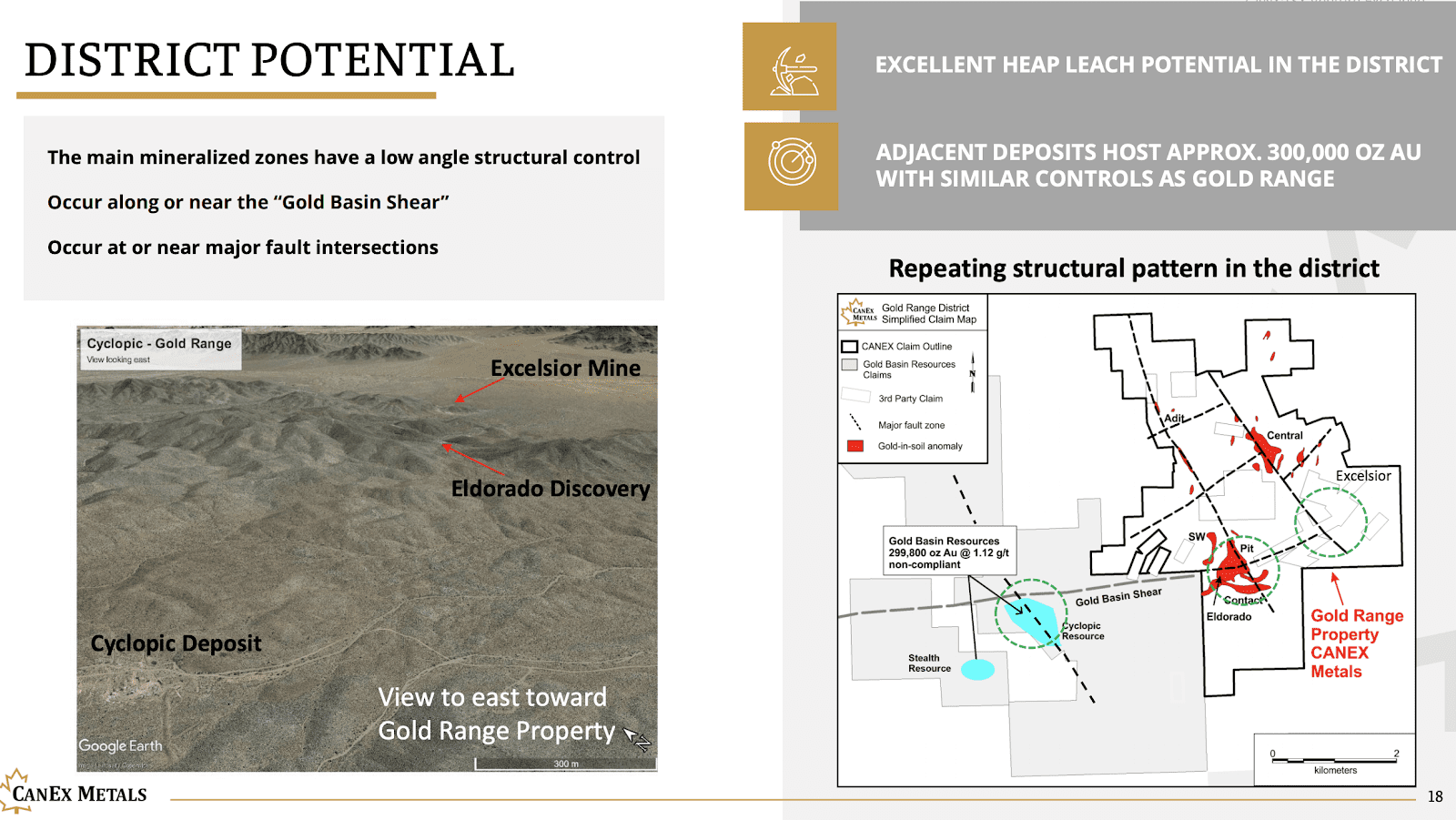 CANEX is in the exploration phase with ongoing work on the property already identifying a 5 kilometer long fault zone containing numerous mineralized zones and exploration targets.

Management has a good understanding of the local geology and structural controls at the Gold Range property. Of particular interest are the multiple bulk tonnage gold targets that CANEX has identified from first pass drilling and sampling on the property. Drilling into this type of target on the property is relatively low-risk and low-cost with a high reward proposition. Thus, presenting a unique opportunity for investors.

In addition, when combined, these targets have the potential to deliver an attractive project with scale that would be of interest to many. Regionally, CANEX’s Gold Range property is quickly developing into a key piece of the puzzle in what appears to be a new emerging bulk tonnage gold district in Northern Arizona. 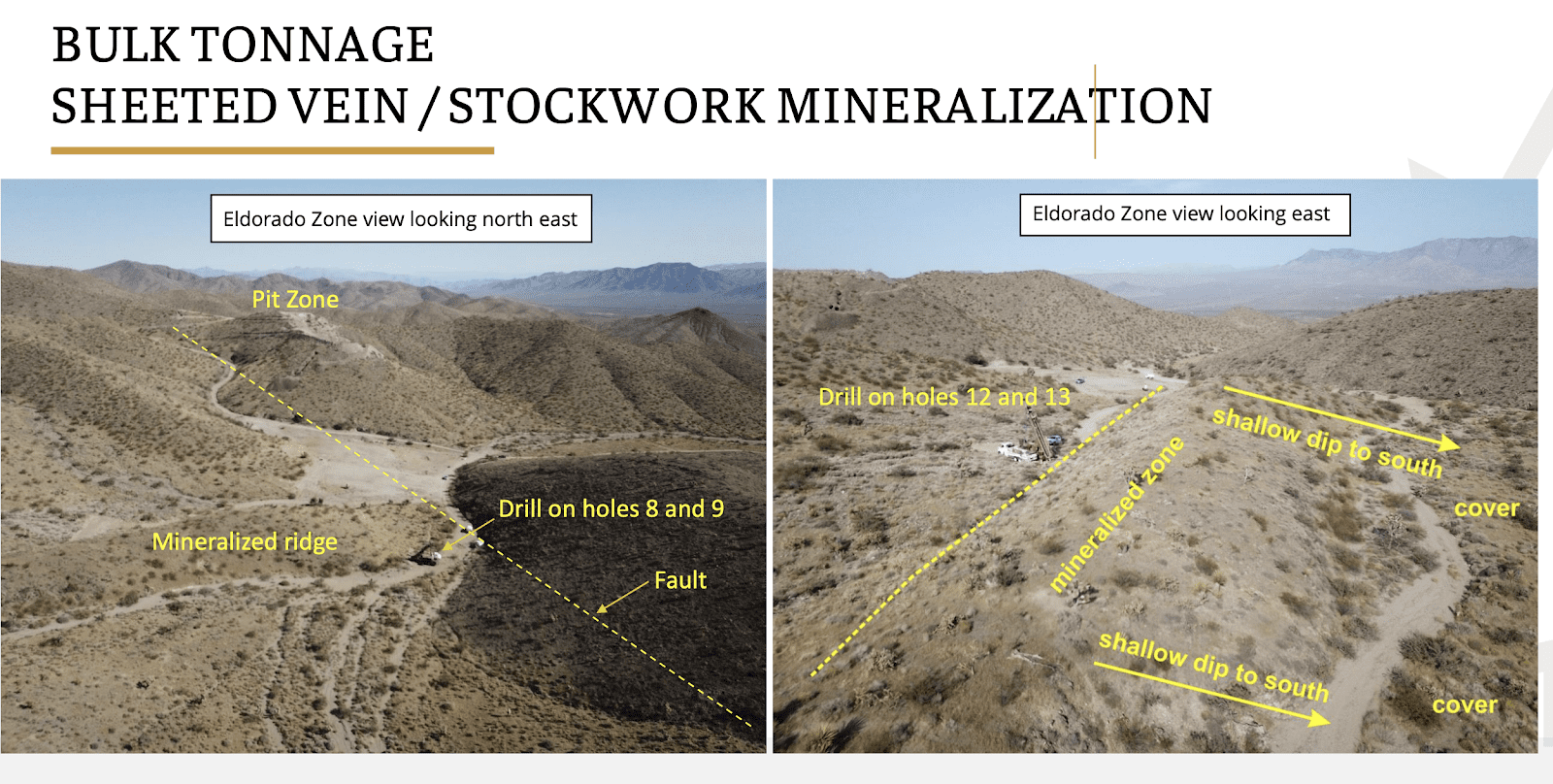 Ebert enthusiastically discussed the next steps for the project. “The geology here is prospective for big deposits. We have multiple large mineralized footprints and indications of intrusion-related mineralization, a model that is known to host large gold deposits .”

“We are drill testing near surface bulk tonnage type targets. If successful, this type of target will be of interest to several players in the region that are looking to buy and consolidate and build these heap leach operations,” he further shared.

Northern Vertex Mining (TSXV:NEE) owns and operates the nearby Moss mine, currently the largest pure gold and silver mine in Arizona with a low cost, open pit mine and heap leach processing. On February 16 2021, Northern Vertex agreed to combine with Nevada-based exploration company Eclipse Gold Mining Corporation (TSXV:EGLD) to form an emerging mid-tier gold producer with a focus on growth through M&A.

Other notable regional developers and operators of gold heap leach projects include:

Fiore Gold (TSXV:F) is a growth-oriented US gold producer. Its flagship asset is the Pan mine, a heap leach gold project based in Nevada. Fiore’s goal is to build a mid-tier US gold mining company through internal growth and strategic M&A. 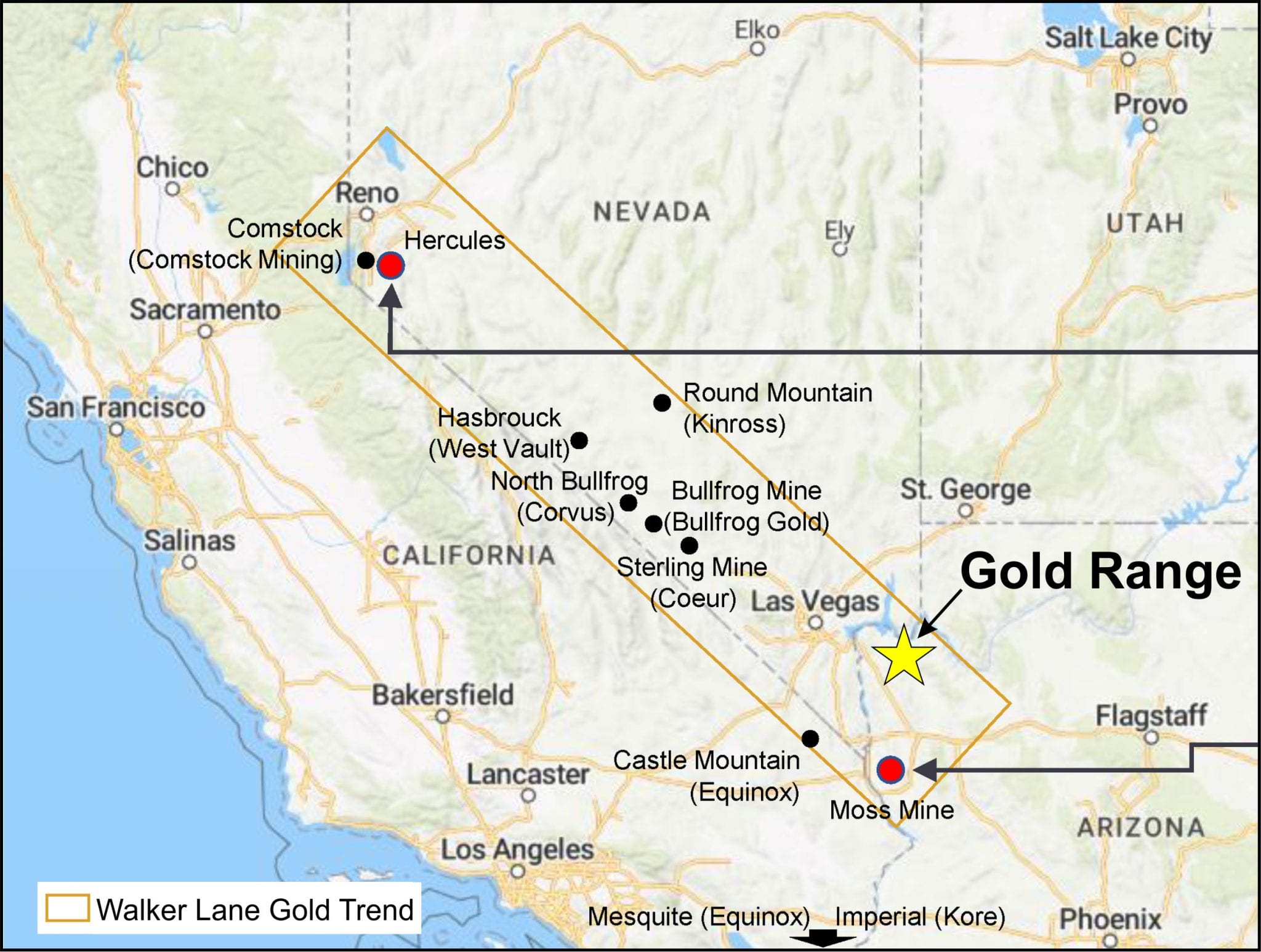 A gold system footprint has been identified and mapped over 5 kilometers by 3 kilometers. Over this mapping, the company has identified several large gold targets, including the Eldorado Zone, Central Zone and Excelsior mine. Additionally, the property’s Adit shear zone has returned 8.47 g/t gold grade over 5.6 meters from a favorably large quartz vein.

In January 2021, CANEX Metals signed a letter of intent to option the Excelsior Mine property, which adds three historic past producing gold mines to the Gold Range property and provides multiple drill ready targets. In a recent interview, Ebert shared, “There’s a zone at Excelsior that’s seen historic underground mining and then some more recent open pit mining. It’s got a beautifully exposed high-grade vein with a 20 to 50 meter wide halo   of veining and good alteration and mineralization that could really have some bulk tonnage potential, as well as that high-grade element.” He further stressed, “We’re not just a high-grade target, we’re really a high value, heap leach type, low-cost mining target.” 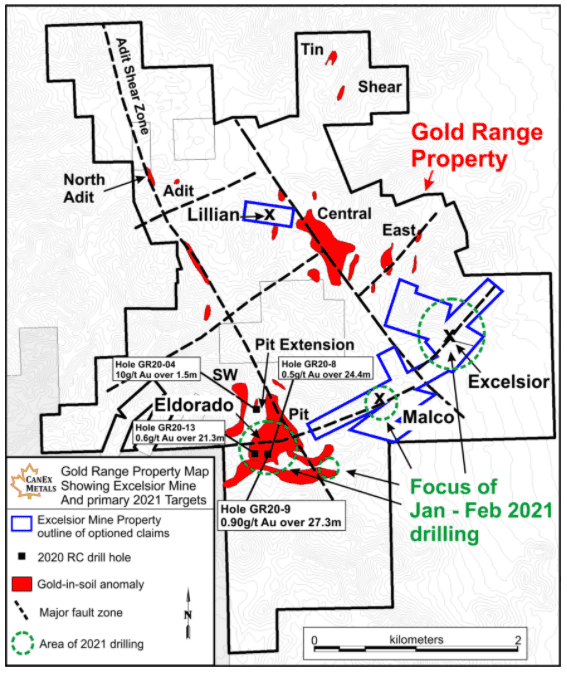 In March 2021, the company completed Phase Two of the project’s drill program with 34 holes. The project’s next steps include additional testing of the Excelsior mine and developing a larger deposit definition program.

Dr. Shane W. Ebert has 30 years of gold, copper and base metal exploration experience in North America, South America, Australia and Europe. Dr. Ebert was involved in discovering a large copper deposit in Mexico, a gold deposit in eastern Canada and copper-gold porphyry in British Columbia and has worked with numerous major and junior exploration companies. His experience includes exploration and research on epithermal and porphyry deposits in Canada, the USA, Mexico and Europe, reduced intrusion-related gold deposits in Yukon and Alaska and polymetallic carbonate-hosted deposits in Peru. Dr. Ebert is also president and director of Surge Copper Corp. and a director of Jade Leader Corp. Dr. Ebert was VP of Exploration and a director of Tyler Resources Inc. until March 2008, when the company was sold to a large multinational mining consortium. He is a registered professional geoscientist with the Association of Professional Engineers and Geoscientists of British Columbia.

Jean Pierre Jutras is a professional mineral exploration geologist with 30 years of experience in the exploration industry. He has worked in over 15 countries on four continents, with numerous public companies, including Placer dome, Prism Resources, Golden Star Resources and Jade Leader Corp. He was the president and director of Tyler Resources Inc. from 2001 until March 2008, when Jinchuan Group Ltd. of China took over Tyler for C$214 million. Jutras then remained as Feasibility Study coordinator from 2008 to 2010 for Tyler Resources Inc., post-takeover transaction. He is also currently a president and director of Jade Leader Corp.

Barbara O’Neill has been corporate secretary for several TSX and TSX Venture corporations, primarily in the mining industry, both nationally and internationally, for the last 30 years. She has extensive experience in public offerings, public listings and Exchange matters, share and asset acquisitions and dispositions, restructurings, securities regulatory requirements for public issuers and other related business transactions. She is currently corporate secretary of Jade Leader Corp., Canex Metals Inc. and CanadaBis Capital Inc.

Chantelle Collins holds a Bachelor’s degree in Accounting and is a member of the Chartered Professional Accountants Association of BC (CPA, CGA). Collins has over 12 years of experience working in the public sector and is well versed in the financial reporting requirements of public companies and currently serves as an officer for three other public companies.

The information contained here is for information purposes only and is not to be construed as an offer or solicitation for the sale or purchase of securities. Readers should conduct their own research for all information publicly available concerning the company. Prior to making any investment decision, it is recommended that readers consult directly with Canex Metals Canada and seek advice from a qualified investment advisor.

The information contained here is for information purposes only and is not to be construed as an offer or solicitation for the sale or purchase of securities. Readers should conduct their own research for all information publicly available concerning the company. Prior to making any investment decision, it is recommended that readers consult directly with Canex Metals and seek advice from a qualified investment advisor.