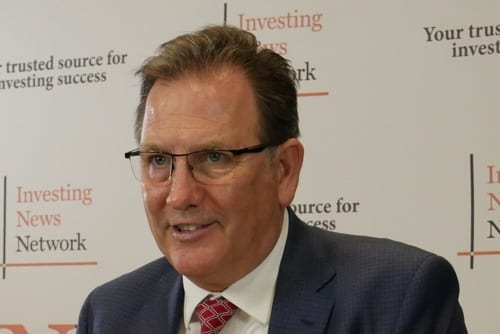 ALX Uranium CEO Warren Stanyer gives his view on the green energy movement and how it will affect the price of uranium.

According to ALX Uranium (TSXV:AL,FWB:6LLN,OTCMKTS:ALXEF) CEO Warren Stanyer Saskatchewan’s Athabasca Basin is a world-class region providing some of the highest-grade uranium in the world.

In the interview below, Stanyer talked about the uranium discovery potential at their Hook-Carter project, which is part of the company’s portfolio of over 200,000 hectares in the Athabasca Basin, and how uranium prices will make the company an attractive target for large companies looking to get into the market.

Below is a transcript of our interview with ALX Uranium CEO Warren Stanyer. It has been edited for clarity and brevity.

Investing News Network: Why is it the right time to invest in uranium?

ALX Uranium CEO Warren Stanyer: Uranium is very lucrative when compared to other commodities. For example, if you can find a uranium deposit grading 10 percent, which is equivalent to 220 pounds per ton. At $30 per ton, you’ll be making US$6,000 per ton. You may have to produce uranium for about $50 per ton at an underground mine in the Athabasca, but these deposits are still lucrative and valuable.

INN: What makes the Athabasca region prospective for uranium?

WS: It’s unique. In 1997, we were a gold company looking at uranium, and the first thing we noticed was the value and the grade. Uranium deposits are hard to find because they’re not big, large targets, but skinny, high-grade targets.

In the Athabasca specifically, the grade is approximately 10 times greater than the world average. Generally speaking, the average grade at an operating deposit in the Athabasca is at least one percent and can reach as high as 20 percent. Whereas in Namibia or Australia, the average grade is generally between 0.3 percent to 0.5 percent, making only shallow deposits economic.

You have to look for mineralization at depth. Cameco (TSX:CCO) made money at McArthur River, which has a depth of up to 600 meters grading 20 percent uranium. At 20 percent uranium, Cameco made approximately US$13,000 per ton, possibly more, when uranium prices reached $80. The spot price is just an indicator and producers will often sell at a higher price.

WS: It already has. Since the disaster at Fukushima and subsequent Japanese reactor shutdowns in 2011, approximately 200 million pounds of uranium have been backed up creating a surplus in a market that was beginning to recover from the market crash in 2008. Since then, we’ve been focusing on making a discovery at Hook-Carter.

INN: What will the uranium market look like as countries, such as China and India, move towards green energy?

WS: Approximately 2.5 billion people are living in China and India, and approximately a third of them don’t have electricity yet. Once they do have it, where is that energy supposed to come from? In China, their goal is to build a million electric vehicles (EVs) and if everyone has an EV, how will they be charged?

I’ve seen uranium go in and out of fashion over the past 20 years and after Fukushima, it went out of fashion. Now, it’s coming back because it’s the most efficient way to generate electricity, but you have to be careful with it. I’m not saying another reactor won’t blow up, but they are getting safer all the time.

INN: What stage of development is the Hook-Carter project in?

WS: We’re in the exploration stage, and we’ve been focused on drilling. It’s like being at a baseball game: your heavy hitters are up next, the bases are loaded and you just need to get a hit.

As for the market, if uranium crashes again, I think a lot of the interest in the sector will dissipate, but I don’t think the market is going to collapse. Many investors from New York are at the show, and they’re optimistic about uranium prices and the supply and demand curve. Our board member Jean-Jacques Gautrot keeps telling us that the supply and demand curves are going to meet in 2022 and the market is going to find equilibrium.

INN: Why is ALX Uranium a good investment opportunity?

WS: We will be ready for when uranium demand increases. We don’t know what we’re going to find at Hook-Carter, but we’re hoping to find a mineable deposit. We know we’re going to find uranium, as everyone on our team has done it before, it just depends on the type of deposit, as some deposits are more mineable than others. Either way, it’s a win-win situation if we find something because we can always be bought out by a larger company.