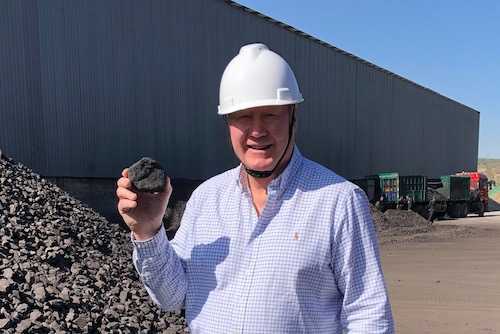 A.I.S. Resources CEO Phillip Thomas joined the Investing News Network to talk about the manganese market and its many use cases.

A.I.S. Resources (TSXV:AIS,OTCQB:AISSF) CEO Phillip Thomas believes that the outlook for the manganese market is bright.

Manganese is used in a variety of industries but approximately 90 to 95 percent is used in specialty steel production, according to Thomas. It also has applications in the battery and agricultural sectors. Ultimately, the optimal use-case for manganese depends on the grade. Lower-grade products of less than 37 percent manganese have a low selling point and are typically used by the agriculture industry in fertilizers because photosynthesis requires the trace element manganese. Higher-grade material of greater than 44 percent manganese is used in the manufacturing of steel and anything with a composition of over 50 percent manganese has applications in the battery industry as manganese sulfate.

The rise of electric vehicles (EVs) is helping fuel the demand for several different metals, most recently manganese. According to Thomas, new battery cathodes are starting to eliminate the need for cobalt, which is, in turn, emphasizing the use of manganese. Thomas also believes that the outlook for the steel industry is going to be the primary driver of demand for the metal, despite trade tensions between China and the US.

According to Thomas, the price of manganese will likely remain stable over the long-term, unlike its iron counterpart, which has experienced multiple highs and lows over the last couple of years. A.I.S. Resources aims to be a vertically integrated producer of high-quality battery raw materials. The company believes that the stable stockpiles of manganese ore in China suggest a stable market.

Below is a transcript of our interview with A.I.S. Resources CEO Phillip Thomas. It has been edited for clarity and brevity.

A.I.S. Resources CEO Phillip Thomas: Manganese is extracted in two forms. Most people are used to the hard rock or lump form of extraction, where the manganese is removed by crushing the ore down to a certain size. Sometimes you have to concentrate it, like in Australia, before shipping it in 20 millimeter to 40 millimeter rock lump sizes.

The other approach is direct shipping ore or DSO which is 0.5 millimeter to 2 millimeters in size and resembles sand. These ores are the cheapest to ship as its just dig and ship with minor grade control required.

INN: How does the grade of manganese impact the manufacturing of different alloys and uses?

The higher the concentration of manganese, the better it is for making a range of steel alloy products. Lower-grade materials tend to be used in the rebar steel market or agriculture industry as not a lot of manganese is required. The silicon-manganese market, however, requires high-grade material. The manganese and silicate are mixed and roasted to create a thin plate which is then broken up into little chips. The chips are then put into bags and sold to ferroalloy manufacturers, who mix the alloy with iron to make a specialty steel alloy. This can also be done with chrome and other elements.

So, the higher grades go towards specialty steel alloys, and the lower grades are concentrated and used in rebar steel. There is an exception. Manganese sulfates are used by battery cathode manufacturers, who need a manganese grade of 50 percent or higher before they can make the sulfate.

INN: What is the relationship between iron ore and manganese?

PT: Manganese is mixed with iron ore and other ingredients to make steel alloys – that’s the relationship. The manganese market is mostly consumed by the steel industry. About 90 percent to 95 percent of all manganese is used in the steel industry so if the price of iron ore goes up usually the manganese market follows. Steel is a mix of iron and carbon, with other elements like manganese mixed together. There’s a precursor. The input material is manufactured before it gets to the steel manufacturers. The manufacturers then blend it in their furnaces to create what alloy composition they want.

The iron ore market climate is similar to the manganese market, but it’s more volatile than manganese. While iron ore has dipped as low as US$44 per tonne and gone as high as probably $125 per tonne in the last couple of years, manganese ranges have grown by around 100 percent for 44 percent manganese, from US$5 to US$10 CIF. This is one of the key reasons A.I.S. Resources is focusing on the manganese market. From our point of view, the volatility in the iron ore price is more difficult to manage, and we need to be confident of our profitability outlook. It’s possible to use futures to hedge the risk but there is not a direct manganese futures market – there will be basis risk. Silico-manganese futures are traded on the Zhengzhou Commodity Exchange (ZCE) in China.

INN: What is your outlook on the manganese market, specifically alloys, batteries and agriculture?

PT: The outlook is good due to the lower volatility and we are probably at an all-time low in the market with the iron ore price trading around US$94 a tonne. Historically manganese hit US$13 per tonne in 2017 but has mostly traded in the US$5.30 to US$7.00 range in the last half-year with the market sitting at US$5.20 at the moment. If we look at the 17 stockpile areas in China, there are about 3.5 million tonnes of manganese. This stockpile level tends to drop down to 3 million tonnes when there’s demand for the product. At 4 million tonnes (August levels) the price should go down then up, because steel companies need about 2.5 months worth of supply to complete orders.

We have seen some softening in the Chinese government’s economic policy for steel, which has a significant impact on manganese prices. They’re making additional announcements in November, but we’re not expecting anything significant. We don’t believe that the US steel tariffs have had an impact due to the depreciation of the yuan against the US dollar. The increase in tariffs seems to have been absorbed by the devaluation of the yuan. From a macro perspective, the market is reasonably solid and the outlook for next year is good due to the number of projects that require high-tensile and high-strength manganese steel alloys and rebar steel for reinforcing.

The agricultural market is also stable. They aren’t big manganese users, but they do need trace elements for fertilizers, among other products.

Of course, the battery market continues to grow. Solid-state electrolytes are the latest development in battery technology, and we’re seeing an increase in demand for manganese-nickel batteries as battery manufacturers move away from using cobalt. There has recently been a 300 percent price reduction in cobalt prices, dropping to US$30,000 per tonne from US$100,000 per tonne.

Manganese has done well because it’s used in the steel industry, but the manganese market outlook is bullish as the demand for manganese in electric vehicle battery production ramps up. The general outlook for battery technology and steel manufacturing is positive in the long term, and we expect end-users to ramp up operations as prices soften over the next six months.

INN: Are there any upcoming trends in the silicon-manganese metal market that investors should be aware of?

PT: Many of these specialty steel alloys are becoming more and more important in a range of industries and technologies where you need lightweight, high-strength steel. Rebar is a stable market in the construction industry.  We see a reduction in manganese prices as the rate of consumption decreases, which happens with most major minerals where you have a demand reduction. The Chinese government says it is moving to electric arc furnaces rather than blast furnaces and so scrap metal will be used containing manganese but because the percentage is small in the scrap, raw ore will still be required.

We’re quite bullish on the general market for manganese only because it’s such a critical metal. There’s no suitable substitute for it, which is the main reason why manganese production is linked to the steel industry and battery metals markets.

The information contained here is for information purposes only and is not to be construed as an offer or solicitation for the sale or purchase of securities. Readers should conduct their own research for all information publicly available concerning the company. Prior to making any investment decision, it is recommended that readers consult directly with A.I.S. Resources and seek advice from a qualified investment advisor.