This Altan Rio profile is part of a paid investor education campaign.*

"You've come to the right place to know Altan Rio. At INN our Mission is to arm you with knowledge and connect you with investing opportunities! Ready for the next step? Download the FREE Investor Kit TODAY to get the institutional investor details!"

Australia officially surpassed China to become the world's top gold producer in 2021, and experts believe there's still plenty of room for growth. Gold production throughout Australia is expected to increase from 321 tons to 379 tons as mining companies flock to the country to capitalize on the world's latest gold rush. Considering Australia has 10 percent of the world's gold reserves, it's clear why this precious metal is important to the Australian economy.

Although gold is prevalent in small traces throughout most of Australia, Western Australia stands out among the other provinces due to the presence of significant greenstone deposits throughout the region, which are commonly associated with gold. These greenstone deposits are why Western Australia produces an impressive 70-percent of all of Australia's gold. Western Australia is also home to the Boddington mine and the famous Super Pit in Kalgoorlie , The two largest open pit operations in Australia and both very much still opperating and increasing production every year . All of these factors create a strong local workforce, mining-friendly policies and a skilled workforce that provide mining companies in Western Australia with favorable conditions for growth and expansion.

Altan Rio (TSXV: AMO) is a Canadian-listed gold exploration company focused on projects within Western Australia, the country's highest gold-producing province. Its flagship project is the Southern Cross project, covering 139.6 square kilometers in Yilgam Craton, Western Australia. Altan Rio holds the rights to 15 prospecting licenses throughout the project area that has been split up into two distinct zones, Corinthia North and Hopes Hill. Each of these zones has subsidiary targets within them that require further exploration with the potential for near-term cash flow. 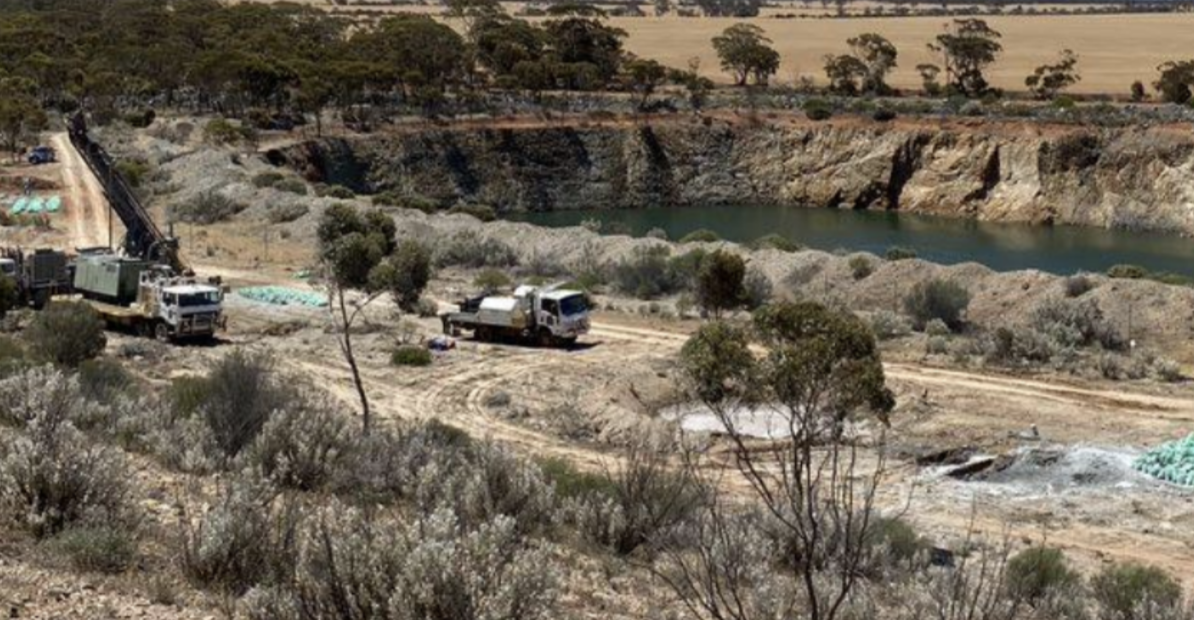 Altan Rio presents a strong opportunity for North American investors to gain access to a prolific gold-producing region in Australia. Led by a strong management team with decades of applicable experience, Altan Rio has everything needed to become a prolific gold producer. Paul Stephen, the CEO, has direct experience holding directorships for public companies listed on ASX and London. This gives him the necessary experience of collaborating operations that are compliant across multiple jurisdictions. John Jones, the chairman, brings over 30 years of experience in the international mining sector with multiple successes and discoveries under his belt. One key member of the management team is Greg Wilson, the head of geology, who has significant experience with a track record of significant discoveries. His most notable discovery resulted in the identification of approximately 4 million ounces of gold. 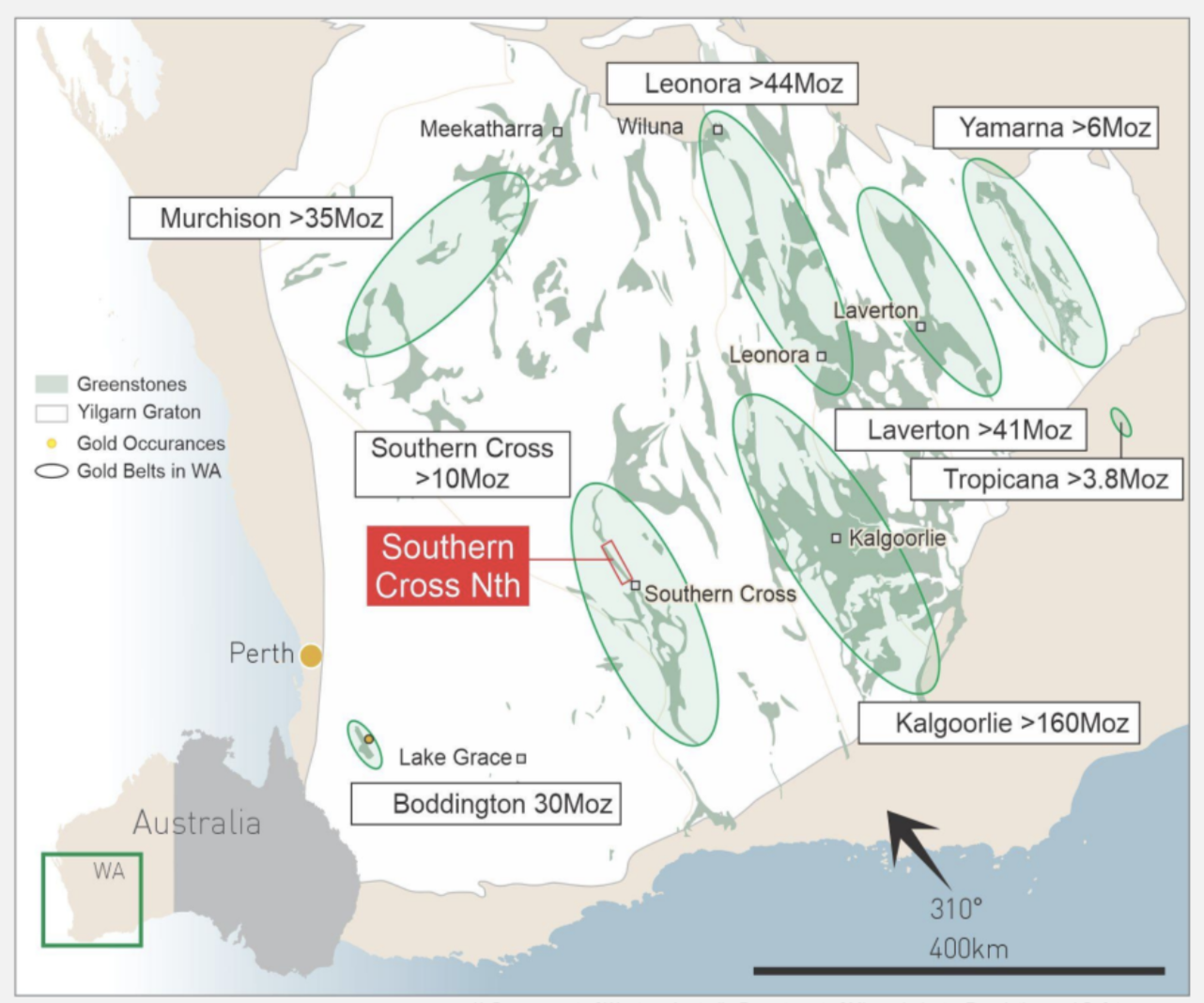 This 23.7 square kilometer project is located in a proven gold-producing district. The company was granted 15 prospecting licenses throughout the project area, each representing an evidence-backed opportunity for gold production. Altan Rio is using world-class technologies to survey the region to generate near-term cash flow.

Many of the tenements have significant near-surface gold mineralization that has gone untested below 50 meters of depth, creating an opportunity for additional discovery. The relatively limited historical drilling returned ore at 12.1 meters at 4.51 g/t gold. This project also contains an additional 17 subsidiary targets that have geological characteristics of gold deposits, warranting further investigation.

The project is a joint venture between Altan Rio, Barto Gold, and Surveyor Resources Pty Ltd. Agreements have been reached between these three companies that are specific to each targeted drilling site. These agreements enable Altan Rio to make meaningful progress towards its goals without needing to rely solely on its own capital. Additionally, the agreement with Barto Gold allows access to a milling facility located 40 kilometers away from the project, which is an economic transportation distance. The company also recently entered into a binding tenement option and sale agreement to acquire a 90 percent interest in "E" (E77/2691) and all mineral rights. E77/2691 covers ~115.9km2 of prospective ground primarily to the west of Altan Rio's current land position in the Southern Cross Greenstone Belt.

The tenements within Hopes Hill cover approximately 10.5 kilometers and contain multiple geological structures believed to contain gold that has been identified by historical exploration, but many of which have not been fully explored. 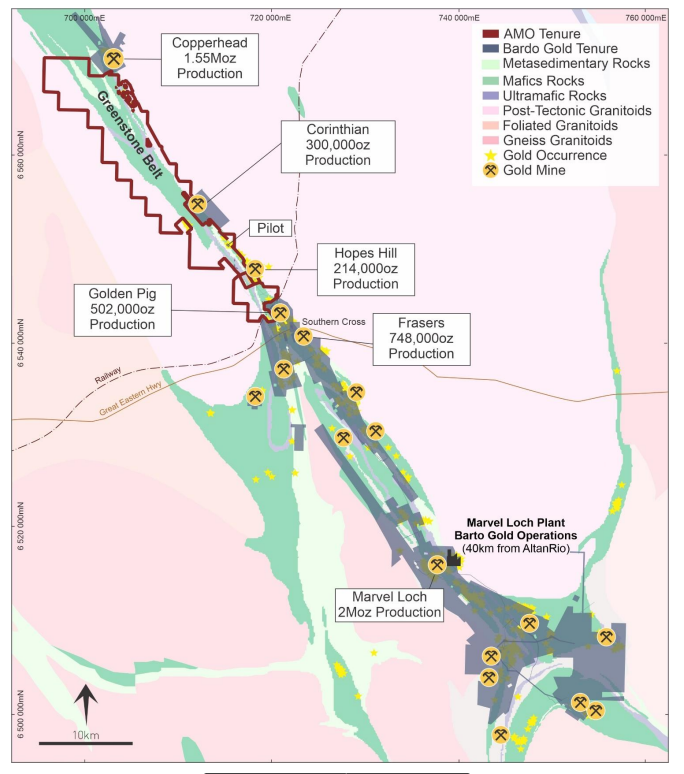 One of the tenements, Pilot, has historically produced 0.56 mt at 3.03 g/t of gold, producing a total of 54,554 ounces of gold. This open-pit mine was completed 65 meters below the surface, however, historical underground sampling indicates that the mineralization may extend down to +300 meters. This mine provides near-term cash flow that can fund drilling throughout the rest of Atlan Rio's tenements.

The remaining tenements in the Hopes Hill zone are currently at various phases moving towards drilling exploration to provide additional results that ideally lead towards gold production.

The tenements in the Corinthia North zone cover approximately 11.5 kilometers and contain two primary targets, further divided into nine subsidiary targets. The Paddocks tenement has historical drilling indicating 3m at 9.51 g/t from 48 meters. Altan Rio will confirm these results during phase 2 of its exploration program. 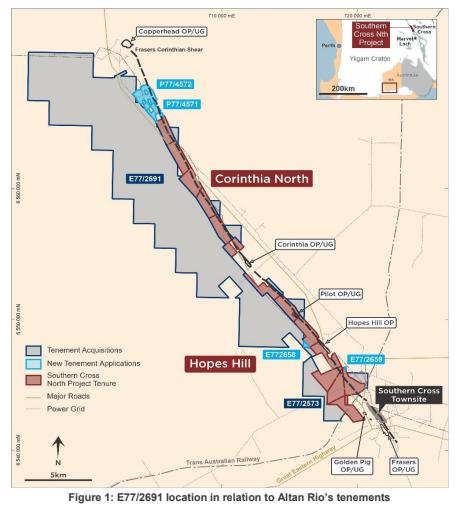 Historical drilling in the Glen Innes zone indicated promising results that have been confirmed by Altan Rio's exploratory drilling. They were able to confirm the strong presence of gold within the mineralization and even extend the down-dip beyond what was previously reported.

Evan Jones serves as a Non-Executive Director of Altan Nevada Minerals Limited and Altan Rio Minerals Limited. Prior to that, he was the Commercial Manager of Troy Resources Brasil Participacoes Ltd., a subsidiary of Troy Resources NL, a mining company listed in Canada and Australia. He also worked as an Executive Advisor with Westchester Corporate Finance in Australia. Mr E. Jones’ twelve years of experience in corporate advisory and commercial management in the mining industry, including six years based in developing countries has a enabled him to build business networks and negotiate opportunities. He holds a Bachelor of Information Technology (Information Systems) and a Bachelor of Commerce (Finance & Management) from Bond University in Australia.

John L.C. Jones serves as a Chairman and Director of Altan Nevada Minerals Limited and Altan Rio Minerals Limited. He has been a Director of Troy Resources NL since 1988 and was Chairman from late 1988 until October 2008. Since 1990, he has been Chairman of Anglo Australian Resources NL. He was formerly Chairman and Director of North Kalgurli Mines Limited and was a founding director of Jones Mining NL. Mr. J. Jones has been a member of the Australasian Institute of Mining and Metallurgy since 1977. He is a prominent player in the international mining sector for over thirty years with a long list of successes. His guiding involvement in four companies led to the discovery of four deposits and the development of eight mines.

Highly experienced geologist with a proven track record in the discovery and development of mineral deposits. Extensive and diverse background in Exploration, Project Development, Business Development and Corporate Management. Extensive experience with gold deposits and their settings, working on many projects throughout Western Australia, particularly in the Yilgarn. Expertise in Archaean lode/orogenic gold and litho-structural analysis has resulted in the identification of in excess of 4.0 million ounces of gold. Previously was Exploration Manager at Integra Mining where he was instrumental in the discovery of the Salt Creek and Majestic deposits in the Mt Monger Area. Discovered the +500 Koz Strezlecki deposit which now forms part of the 5Moz Kundana gold camp owned by Northern Star.

Brian Cole has a Bachelor of Business degree from the Western Australian Institute of Technology, specializing in Business Law and Accounting, and a Graduate Diploma in Property from Curtin University. He is a Chartered Accountant and Chartered Management Consultant. As well as previously been a board member of the West Australian Ballet for over 11 years, and Chair of Chrissie Parrott Arts, Brian has held directorships within public and private companies and not for profit entities, and is currently a Director of Altan Nevada Minerals Limited (listed on Toronto Ventures Exchange), Co3 Contemporary Dance (an Australian NFP), GlobalParking Management, Inc. and CW Developments, Inc (Philippines companies). He has a strong knowledge of strategy, finance and compliance across multiple jurisdictions.

*Disclaimer: This profile is sponsored by Altan Rio ( AMO:CA ). This profile provides information which was sourced by the Investing News Network (INN) and approved by Altan Rio in order to help investors learn more about the company. Altan Rio is a client of INN. The company's campaign fees pay for INN to create and update this profile.

The information contained here is for information purposes only and is not to be construed as an offer or solicitation for the sale or purchase of securities. Readers should conduct their own research for all information publicly available concerning the company. Prior to making any investment decision, it is recommended that readers consult directly with Altan Rio and seek advice from a qualified investment advisor.