UEX's 2021 exploration program will consist of drilling on three of the Company's projects, Christie Lake, Hidden Bay, and West Bear.  Work at Christie Lake is scheduled for the summer, whereas drill testing at Hidden Bay and West Bear will occur this winter.  The budget for the combined programs at all three projects is anticipated to be approximately $4.0 million.

Exploration work this winter on the Hidden Bay Project will focus on the Uranium-Nickel Sands Area and the Dwyer Lake targets for uranium exploration (see Figure 2).  At West Bear, the Company will be targeting the Huggins Lake and Michael Lake areas (see Figure 2) which are considered prospective for both uranium and cobalt-nickel deposits.  In preparation for the winter drilling activities, UEX is conducting linecutting and Horizontal Loop Electromagnetic Surveys ("HLEM") on all four target areas to re-locate the favourable graphitic fault horizons last explored during the 1980's.  HLEM and linecutting activities have already commenced on the Huggins Lake and Michael Lake targets and will be completed before year end.

The Uranium-Nickel Sands area ("U-Ni Sands"), discovered and defined between 1973 and 1984 by previous operators is located approximately 2 km northwest of UEX's Raven and Horseshoe Deposits and 5.5 km southwest of Cameco's Rabbit Lake Deposit, the first uranium deposit discovered in the Athabasca Basin (see Figure 3).  The U-Ni Sands is a 1 km long by 800 m wide kidney bean-shaped zone of highly anomalous uranium and nickel-bearing glacial boulders and sand that are believed to have been transported down-ice of an outcropping nickel-bearing uranium deposit by the movement of glaciers.

Several important economic uranium deposits were discovered in the Athabasca Basin by tracing the dispersion of such boulders in the up-ice direction back to their source deposit.  Cameco's Key Lake Deposits, the Collins Bay A and B Zone Deposits, and several of the former-producing Cluff Lake Mine Deposits were all discoveries made through tracing radioactive boulders back to their source.  Most recently, Fission's Triple R Deposit was found by sourcing radioactive boulders in glacial till.

UEX is planning to complete a 10 to 12 -hole-1,400 m drill program up-ice to the north-east of the U-Ni Sands area during the upcoming winter exploration program.  Prior to drilling, a new ground grid will be established and a 22 km HLEM survey will be completed to accurately re-locate the graphitic conductor in the target area.

Four drill targets have been identified in the Dwyer Lake area.  Follow-up drilling this winter is planned both north and to the south of the Rhino target, where a large open-ended alteration zone was defined by UEX in the 2015 drilling program.  To the north of Rhino, a new resistivity and induced polarization anomaly was defined in 2015 that has yet to be tested by diamond drilling.  A historical electromagnetic conductor extends to the east of the new anomaly that also has never been tested by drilling.

The UEX team has also identified that the conductor that defines the north limb of the Dwyer Dome comes to the surface well north of the pattern of historical drilling by the previous operators.  Holes drilled along the eastern end of this northern rim were anomalous in nickel, a geochemical pathfinder element often observed proximal to Athabasca uranium deposits and unconformity cobalt-nickel deposits.

UEX is planning to complete a 15 hole-2,500 m drill program to test the Dwyer Lake targets.  The 2015 Dwyer Lake grid will be re-established and expanded and portions of the historical conductors will be re-located using a 82 km HLEM survey to help refine targeting during the drill program.

The Huggins Lake area is located on the West Bear Project adjacent to the Dwyer Lake target, along the northern limb of the West Bear Dome, host of UEX's West Bear Uranium Deposit and West Bear Cobalt-Nickel Deposit (see Figure 3).  UEX's review of the historical drill core has defined two high-priority exploration targets along the north rim west of Huggins Lake.  This review of the historical drill core has determined that widespread hydrothermal alteration has occurred in the basement rocks of at least two drill holes, as well as anomalous uranium and nickel in graphitic metapelites, the same host rock that contains the known uranium and cobalt-nickel deposits.  Historical drilling in the Huggins Lake area was completed in the 1980's, is widely-spaced and focussed on testing for unconformity-hosted uranium deposits.  UEX believes that the Huggins Lake area is prospective for both basement-hosted uranium deposits and cobalt-nickel deposits.

UEX is planning to complete a 6 hole-700 m drill program this winter to test the Huggins Lake targets.  Prior to drilling, the historical electromagnetic conductors will be re-located using a 36 km HLEM survey to help refine targeting during the drill program.

The Michael Lake area is located along the eastern flank of the West Bear Dome.  Exploration drilling of the overburden in the late 1970's and early 1980's defined a wide interval of anomalous nickel in the overburden approximately 4.2 km long.  Sporadic diamond drilling by previous operators was widely-spaced and did not appear to often penetrate the key structure hosted within the wide graphitic package where the West Bear Deposits are located.

UEX is planning to complete an 8 hole-1,000 m drill program this winter to test the Michael Lake target.  The existing 2015 grid will be re-established and expanded and portions of the historical conductors will be re-located using a 47 km HLEM survey to help refine targeting prior to the drill program.

The 2021 exploration drill program on the Christie Lake Project is planned to commence in the summer.

In 2020, UEX was able to confirm that the northern end of the Ōrora North Resistivity Anomaly is a high-priority target requiring follow-up exploration (see Figure 4).  The 2021 exploration program at Christie lake will follow up the encouraging hydrothermal alteration encountered in holes CB-150 and CB-151 drilled in 2020 in the Ōrora North area.  This drilling program will also test the new B Trend Resistivity Anomaly located to the southwest of 2019 drill hole CB-141 that averaged 1.17% eU 3 O 8 over 1.9 m (see UEX News Release dated October 29, 2019). The untested B Trend Resistivity Anomaly is similar in size and intensity to the resistivity anomaly associated with the Paul Bay, Ken Pen and Ōrora Deposits and is coincident with an electromagnetic conductor defined during the 2020 winter geophysical program.

UEX will also conduct its first exploration drilling program on the adjacent "A" Conductor Trend.  The "A" Conductor Trend is believed to be the northeast extension of the P2 Fault, host structure to all of the uranium mineralization at the McArthur River Mine.

The technical information in this news release has been reviewed and approved by Roger Lemaitre, P.Eng., P.Geo., UEX's President and CEO, and Chris Hamel, P.Geo., UEX's Exploration Manager, who are each considered to be a Qualified Person as defined by National Instrument 43-101.

UEX (TSX:UEX, OTC:UEXCF.PK, UXO.F) is a Canadian uranium and cobalt exploration and development company involved in an exceptional portfolio of uranium projects, including a number that are 100% owned and operated by UEX, one joint venture with Orano Canada Inc. ("Orano") and ALX Uranium Corp. ("ALX") that is 51.43% owned by UEX, as well as eight joint ventures with Orano, one joint venture with Orano and JCU (Canada) Exploration Company Limited, which are operated by Orano, and one project (Christie Lake), that is 64.34% owned by UEX with JCU (Canada) Exploration Company Limited which is operated by UEX.

The Company is also leading the discovery of cobalt in Canada, with three cobalt-nickel exploration projects located in the Athabasca Basin of northern Saskatchewan, including the only primary cobalt deposit in Canada.  The 100% owned West Bear Project was formerly part of UEX's Hidden Bay Project and contains the West Bear Cobalt-Nickel Deposit and the West Bear Uranium Deposit.  UEX also owns 100% of two early stage cobalt exploration projects, the Axis Lake and Key West Projects.

Our portfolio of projects is located in the eastern, western and northern perimeters of the Athabasca Basin, the world's richest uranium belt, which in 2018 accounted for approximately 22% of the global primary uranium production.  UEX is currently advancing several uranium deposits in the Athabasca Basin which include the Christie Lake deposits, the Kianna, Anne, Colette and 58B deposits at its currently 49.1%-owned Shea Creek Project (located 50 kilometres north of Fission's Triple R Deposit and Patterson Lake South Project, and NexGen's Arrow Deposit), the Horseshoe and Raven deposits located on its 100%-owned Horseshoe-Raven Development Project and the West Bear Uranium Deposit located at its 100%-owned West Bear Project. 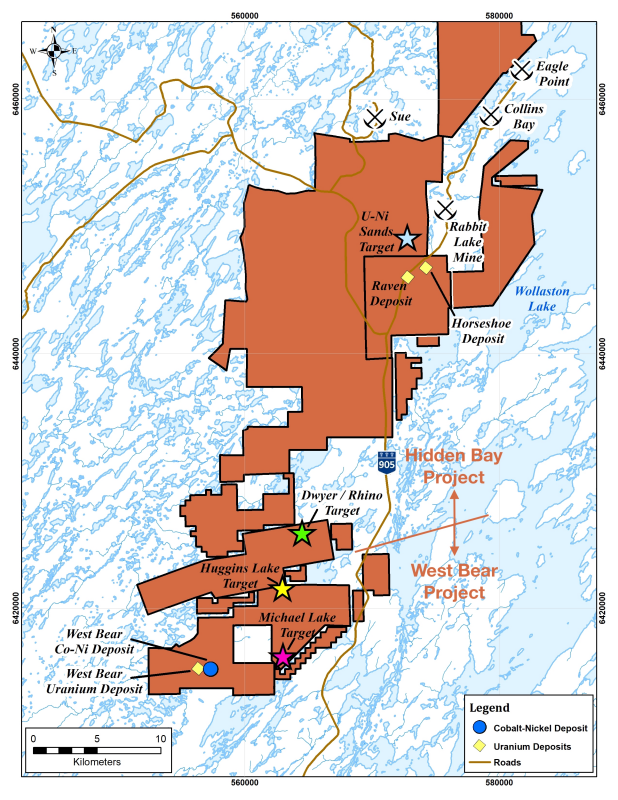 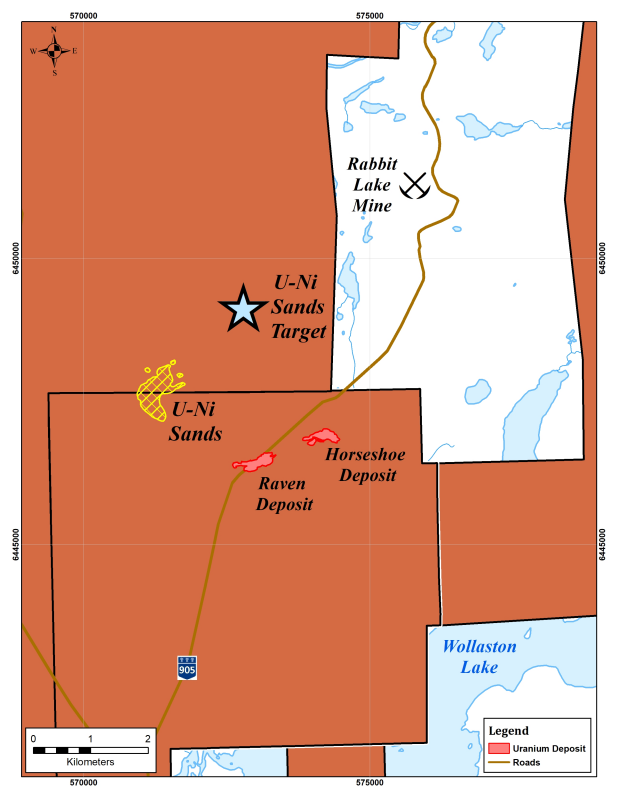 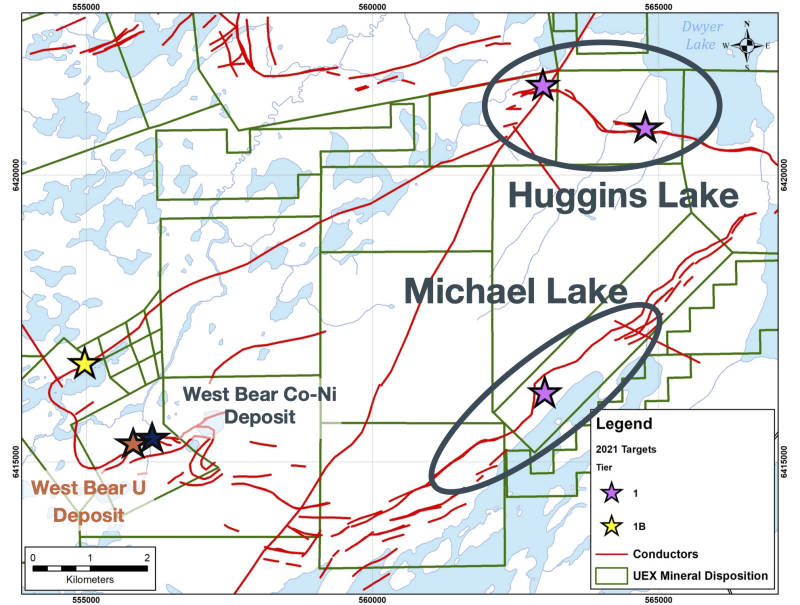 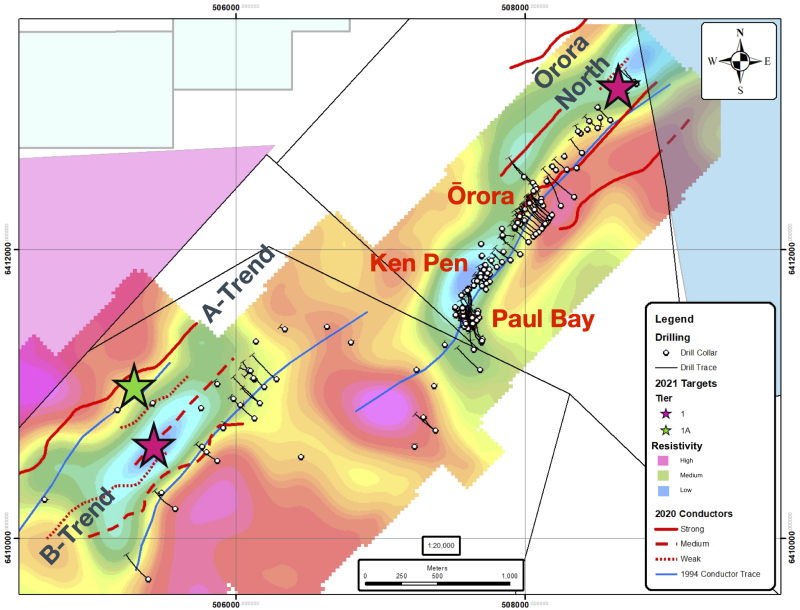 NexGen Energy Ltd. ("NexGen" or the "Company") (TSX: NXE) (NYSE: NXE) (ASX: NXG) is pleased to announce radioactivity results and the completion of the 2021 field programs that focused on exploration and a detailed geotechnical site confirmation program at the Arrow Deposit ("Arrow" or the "Project") at the 100% owned, Rook I property, in the Athabasca Basin, Saskatchewan .

GTI Resources Ltd (GTI or Company) is pleased to advise that the 2022 work program is scheduled to commence the week of January 31 with field reconnaissance and drilling preparation now underway at the Thor ISR uranium project in Wyoming’s Great Divide basin (Figure1). Two mud rotary drill rigs will be re‐mobilised in the coming weeks subject to conditions, to complete the remaining ~60 holes of a planned 50,000‐foot (~15,000m) ~100‐hole maiden drill program at Thor1.

Vancouver, Canada, January 26, 2022 CanAlaska Uranium Ltd. (TSX-V: CVV; OTCQB: CVVUF; Frankfurt: DH7N) ("CanAlaska" or the "Company") is pleased to announce it has entered into a Letter of Intent ("LOI") with Basin Energy Limited ("Basin Energy"), an Australian unlisted public company, to allow Basin Energy to earn up to an 80% interest in CanAlaska's 100%-owned North Millennium and Geikie projects, and a 100% interest in CanAlaska's 100%-owned Marshall project. These projects total 50,994.56 hectares in the Eastern Athabasca Basin in Saskatchewan, Canada Read More >>

GTI Resources Limited (GTI or the Company) is pleased to report on its activities for the December 2021 quarter.

The world’s energy needs are expected to skyrocket thanks to population growth and higher demand from developing nations, making thorium reactors increasingly appealing.

Nuclear energy is considered by some to be green energy because it does not produce direct carbon dioxide emissions, unlike fossil fuels, which contribute to air and water pollution.

Over the last decade, more countries around the world have turned to nuclear as an energy source, integrating nuclear energy into their energy grids, specifically to produce electricity.