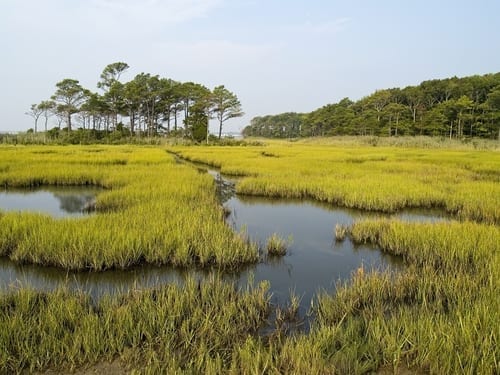 The proposed cutbacks to federal funding for the EPA’s Chesapeake Bay Initiative won’t derail the inevitable cleanup of the region’s polluted waters. On the contrary, it will help drive the adoption of a market-based strategy to engage the agriculture industry and the private sector, which will accelerate cleanup of the Bay and other U.S. waters.
The impact of nutrient runoff from livestock production has reached crisis levels in the United States (and the world). Clean water strategies developed over the last decades are now unable to keep up with today’s pollution load. Declining water quality and escalating costs are forcing us to look for alternative solutions. Many livestock industry leaders, federal policymakers, state legislators and other stakeholders are supportive of market-driven solutions to address nutrient runoff.
Technologies that address the problem at the source have been developed by the private sector. Some are commercial-ready today. In addition, the implementation of important policy frameworks is underway in several states, offering both a path to a market-driven solution and a new investment space.

The US Government spends $114 billion each year on wastewater treatment, with nutrient removal as the main cost driver. According to the U.S. Environmental Protection Agency (EPA), excessive levels of nitrogen and phosphorus are the greatest detriment to the country’s water quality. The federal agency has identified the need for substantial nutrient reductions in several of the nation’s watersheds, including the Mississippi River Basin/Gulf of Mexico, Great Lakes and Chesapeake Bay.
Reportedly, agriculture is responsible for between 70 percent to 90 percent of nutrient runoff in several major watersheds; more specifically, livestock manure is one of the largest (if not THE largest) unregulated sources of nutrient pollution. Worsening matters, livestock manures, when mismanaged can be a significant source of ammonia, greenhouse gases, and pathogens. Ammonia emissions are a dual threat in that they contribute to nutrient runoff, as well as lead to the formation of PM2.5, small inhalable particulate matter that poses serious health risks.
Nearly two-thirds of livestock production in the United States takes place at large-scale facilities, which still use traditional manure treatment methods more suitable for smaller-scale farming—spreading it on the ground, untreated, as a fertilizer. The U.S. livestock industry, according to 2015 estimates, manages more than 9 million dairy cows, 80 million cattle, 62 million swine and 2 billion poultry—representing an annual total of 1.5 billion tons of manure.
All of this manure when misapplied can have a devastating impact on the country’s watersheds, most notably in the Chesapeake Bay—the largest estuary in the United States, the Great Lakes and the Gulf of Mexico. Excess nutrients cause toxic algae blooms, contaminate drinking water and lead to dead zones that devastate fish, crab and oyster populations. Large scale livestock facilities, because of their scale and concentration, offer the best opportunity to reduce nutrients cost-effectively.

Livestock manure is not regulated under the 1972 Clean Water Act (CWA). “The majority of wastewater treatment spending has been aimed at reducing waste from “point sources” with a measurable discharge—think smokestacks or discharge pipes from municipal sewage treatment facilities, power and manufacturing plants,” said Steven Rowe, President and CEO of Newtrient, LLC. Newtrient is a business collective of the leading U.S. dairy farmer cooperatives, Dairy Management, Inc. and the National Milk Producers Federation. The company’s milk cooperative board members represent producers responsible for more than half of the nation’s milk production. Dairy Management, Inc., being the industry’s checkoff organization represents nearly all dairy production in the United States.  “At Newtrient, our bottom line goal is to reduce the environmental footprint of dairy and make it economically viable to do so,” Rowe told INN.

Bion Environmental Technologies Inc. (OTCQB:BNET) has developed a proprietary technology platform aimed at reducing costs and improving efficiencies in both the multi-billion dollar water treatment sector and dairy/meat/egg production industries. Bion’s treatment solutions are scalable, proven in commercial operations and have been accepted by EPA, US Department of Agriculture and other regulatory agencies.Send me an Investor Kit
Given the vast scale of today’s livestock industry and the overwhelming amount of manure it generates, the policies and strategies laid down more than 40 years ago are often misguided and ineffective, to say the least, says Rowe, who believes the answer lies in economic models that positively incent farmers to address manure treatment issues onsite. He pointed out that dairy farmers cannot simply add environmental protection costs into the price of milk and remain competitive. “Hence, we need an economic model that allows farmers to both produce large volumes of affordable food and reduce their environmental footprint without bearing the cost burden alone or we will be putting farms out of business, and it is farms that feed us.”
Rowe also says that economically incenting farmers to treat pollution onsite will also stimulate the investment community to support new manure treatment technologies that help farmers achieve a smaller environmental footprint for the food they produce.  “That’s the space that the investment world should be looking at,” says Rowe, “particularly in those states that are being more creative.”

Many states are moving to water quality trading programs to reduce costs. In a water quality trading market, sources that can reduce their nutrient runoff or discharges below target levels can sell their surplus reductions or “credits” to other sources who face higher remediation costs. This creates a funding source to enable the implementation of the most cost-effective solutions first. There are approximately three dozen water quality trading programs in the US, although most of these are in their early stages.
One state that is ramping up its trading program to “establish a marketplace for private sector participation in meeting Bay cleanup goals” is Maryland. According to an October 11, 2017, press release from the Maryland Department of the Environment, “The [annual] cost of reducing nitrogen could be as low as $200 per pound in the agriculture sector, compared to an estimated $3,800 per pound for urban retrofits to reduce stormwater runoff.” These cost estimates are substantially higher than previous estimates due to the inclusion of ‘real costs’, including ongoing operations and maintenance, not considered in earlier studies. While entrenched interests have opposed water quality trading, the dramatic difference in taxpayer costs indicate that the strategy is inevitable.

Pennsylvania, with its heavy agriculture influences, faces substantially greater challenges than Maryland. Bion Environmental Technologies—a developer of advanced livestock manure treatment and resource recovery technology— has helped to draft Senate Bill 799 which aims to establish a competitive bidding program to identify and acquire low-cost private sector nutrient reductions for its trading program. Bion has stated it can provide very large quantities of nutrient credits as low as $10 per pound. In mid-October 2017, the bill received a supportive vote of 10-2 in the Pennsylvania Senate Environmental Resources and Energy Committee, advancing it toward consideration by the Senate.
If passed, the bill would implement the recommendation made in the bipartisan 2013 Pennsylvania legislative study that showed a competitive bidding process could save the state upwards of 80 percent ($1.5 billion) annually on its EPA-mandated Chesapeake Bay cleanup costs. In a Letter of Expectation sent to PA Department of Agriculture in April 2017, US EPA expressed its support of credit trading, especially to offset looming stormwater requirements, and encouraged PA to use competitive bidding to engage the private sector.
“This is a very interesting piece of legislation,” said Rowe. “They went down a procurement path saying pollution prevention is a commodity and anyone who can provide this service at the lowest cost should win. It’s a fascinating approach and we’re supporting it.”

Frameworks such as those supported by Newtrient and Bion work by setting up economic structures that allow farmers, technology developers and investors to improve their business by reducing the environmental footprint of agriculture. This market-driven strategy is creating a new early-stage investment opportunity not only in environmental assets and nutrient trading, but also in industry-changing technologies that supply large-scale solutions to prevent agricultural-based pollution.
“The way to achieve both highly-available large volumes of affordable food and reduce the environmental footprint,” said Rowe, “is to essentially economically incent the farms and thus stimulate an investment community in achieving a smaller environmental footprint for the food we produce.”
This INNspired article is sponsored by Bion Environmental Technologies Inc. (OTCQB:BNET). This article was written according to INN editorial standards to educate investors.

See our exclusive index of Cleantech companies on the move
EXPLORE