This Signature Resources Ltd. profile is part of a paid investor education campaign.*

The Lingman Lake property has an extensive historical database of over 25,000 meters of core from prior drill programs and existing infrastructure, which represent an excellent opportunity for low-cost mineral exploration and a fast-track to a NI 43-101-compliant resource estimate.

Further illustrating management’s confidence in the potential of the Lingman Lake property and the surrounding geology, Signature Resources launched two aggressive claim staking programs in 2017 and 2018. The company targeted highly-prospective claims to the north and west of the mine site where government geologist records have indicated numerous occurrences along the greenstone belt in a similar setting as the Lingman Lake gold zones, significantly increasing its land package. Signature Resources’ property currently totals 14,820 hectares.

Signature Resources completed a high-resolution VLF-EM survey over the property in the first half of 2018, the results of which display a correlation between the known gold zones and the magnetic and electromagnetic components of the survey. From this, two horizons spanning the entire strike length of the property were identified containing numerous high priority targets for additional follow up work.

In the last half of 2018, the company completed a 1500-meter drill program that focused on the areas that formed the historic resource. Highlights from the drill program include:

Presently an exploration camp is maintained at the mine site which includes a core-logging facility and ready to use all-season accommodations. Moving forward, Signature Resources intends to continue its exploration efforts on the property to expand the resource and produce a resource model of the gold zones.

The large land package includes the historic Lingman Lake mine and is located in the mining jurisdiction of northwestern Ontario. The project is 80 kilometers south-east of Yamana Gold Inc.’s (TSX:TRI) Monument Bay project, and 218 kilometers northwest of Newmont Goldcorp’s (TSX:NGT,NYSE:NEM) Musselwhite mine. The Lingman Lake project is also 314 kilometers north of the Red Lake mining district where 17 mines have collectively produced more than 25 million ounces of gold.

First discovered in the 1940s, Lingman Lake hosts a historic estimate of 234,658 ounces in-situ with an average grade of 6.86 g/t gold contained in multiple zones.

Existing infrastructure at the mine site includes a 127-meter deep shaft with three separate levels of underground workings and approximately one kilometer of drifting, all of which could provide underground access for future exploration and potential development. The historical underground bulk sample resulted in an average grade of 17.3 g/t gold while the composite sample averaged 19 g/t gold. Further work on the property included drilling conducted during the 1970s and 1980s, the results of which formed the basis of the current historical estimate. 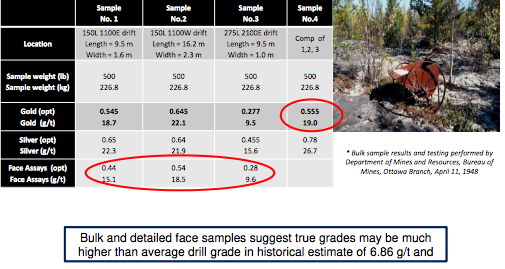 Further work on the property included drilling conducted during the 1970s and 1980s, the results of which formed the basis of the current historical estimate.

In 2016, Signature Resources conducted a core re-sampling and logging program aimed at validating the extensive historical database in order to incorporate the data into a NI 43-101 compliant resource report and model for the Lingman Lake property. The historical database included approximately 20,000 meters of archived core on site. The program consisted of re-logging 22 holes (a subset of the 177 holes drilled between 1987 and 1989) and assaying 1,331 samples for gold and other elements.

The results of the program, released in late 2016 and early 2017, confirmed the historical drill results and high grades at the Lingman Lake mine site. A total of 450 samples were core duplicates producing a 94-percent correlation with the historical drill results, and 17 percent of these core duplicates (77 samples) yielded results at or above 5 g/t gold. The core logs were representative of the Lingman Lake deposit along 1,000 meters strike and a width of 230 meters.

“We can now move forward with the resource picture by optimizing this data into upgrading the historical estimate of 234,684 ounces to current standards,” said Signature Resources President and CEO Walter Hanych. “Lingman Lake has clearly demonstrated that it indeed is a high-grade gold property deposit worthy of much more work and we look forward to developing it into a significant asset for the shareholders of Signature Resources.” 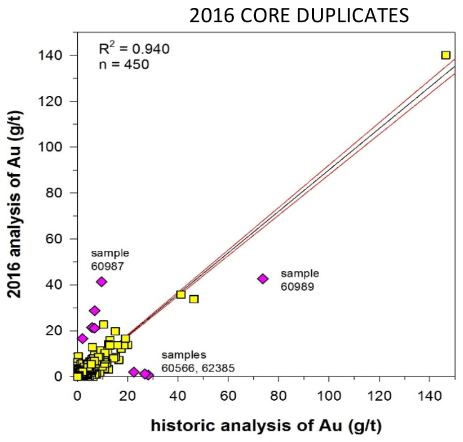 In early 2018, Terraquest conducted an airborne geophysical survey at Lingman Lake. The preliminary interpretation of the survey showed that the gold mineralized zones at Lingman Lake displayed correlation to both the magnetic and electromagnetic components of the survey. Using the results from this survey, Signature Resources identified high priority targets for additional follow up work in the company’s 2018 drill campaign.

“We are very excited by these results. The correlation of the Lingman Lake gold zones to magnetic and VLF-EM components establishes a signature, which can now be applied across the entire Lingman Lake property. The geophysical response of the South Horizon is similar to that observed for the Lingman Lake gold mineralized zones, in both the Magnetic and VLF data. The South Horizon contains six high-priority targets and, as was previously reported, the North Horizon contains 12 high priority targets. The potential for identifying targets outside this trend is very high. Furthermore, the survey clearly demonstrates that the structures associated with gold mineralization within the immediate mine area at Lingman Lake extend beyond current known limits. Clearly, the property has developed to a district exploration play which only bodes well for discovering new mineralized zones,” said Hanych. 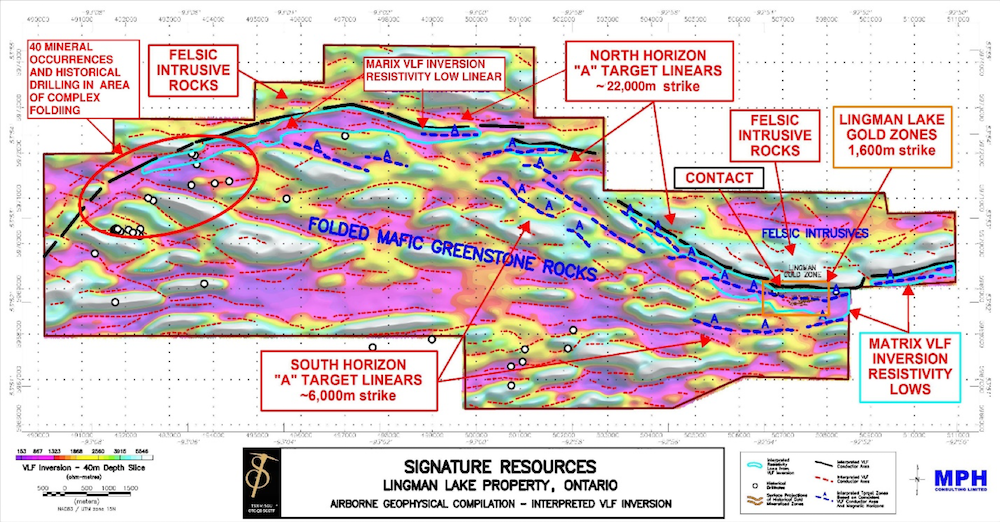 In August 2018, Signature Resources commenced its drilling program, which included 1,500 meters of drilling in areas where the historical resource estimate resides. The goal of the drilling was to test the grade and continuity of the mineralization uncovered in historical drilling. The program returned numerous high-grade gold values from across the property. Results from this program were reported over the course of November 2018.

Drilling in the West Zone, the first holes to be reported on herein, is highlighted by the following:

Drill hole 18-02 was collared 48 meters east of 18-01 in the vicinity of historical drill hole 45-49 which yielded 8.2 g/t gold along a 4.18-meter drill intercept. The historical diamond drill holes were put down by previous operators on the property. 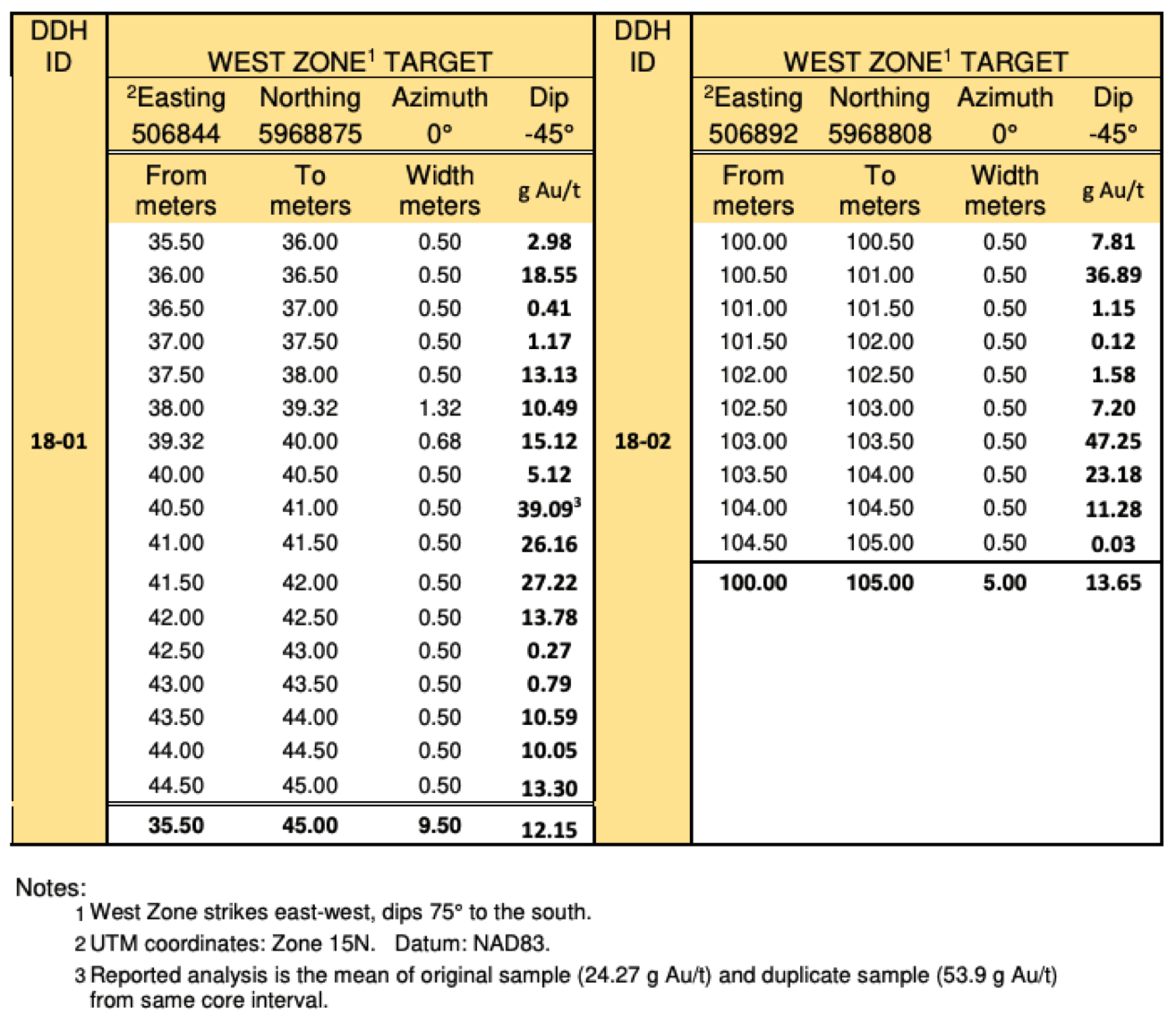 Highlights from the North zone drilling are summarized below.

Drill hole 18-04 was drilled to test the grade of gold-mineralized shoots between surface and the 150 Level in an area previously untested by drilling. 18-04 intersected the interpreted edge of a gold-mineralized shoot of the North zone and returned an assay of 2.33 g/t gold along six meters, (approximately 5.2 meters true width) at 23 meters vertical depth. 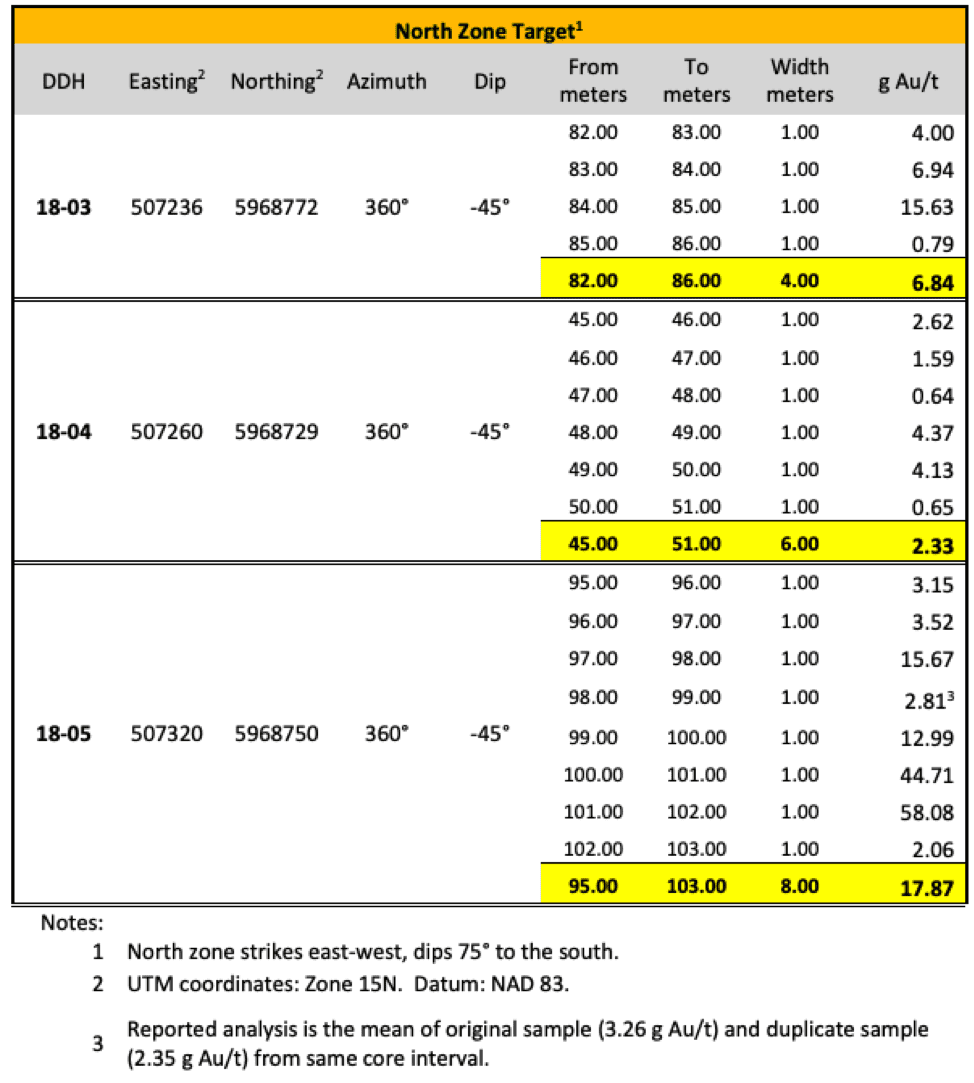 Drill highlights from the South and Central zones are summarized below. 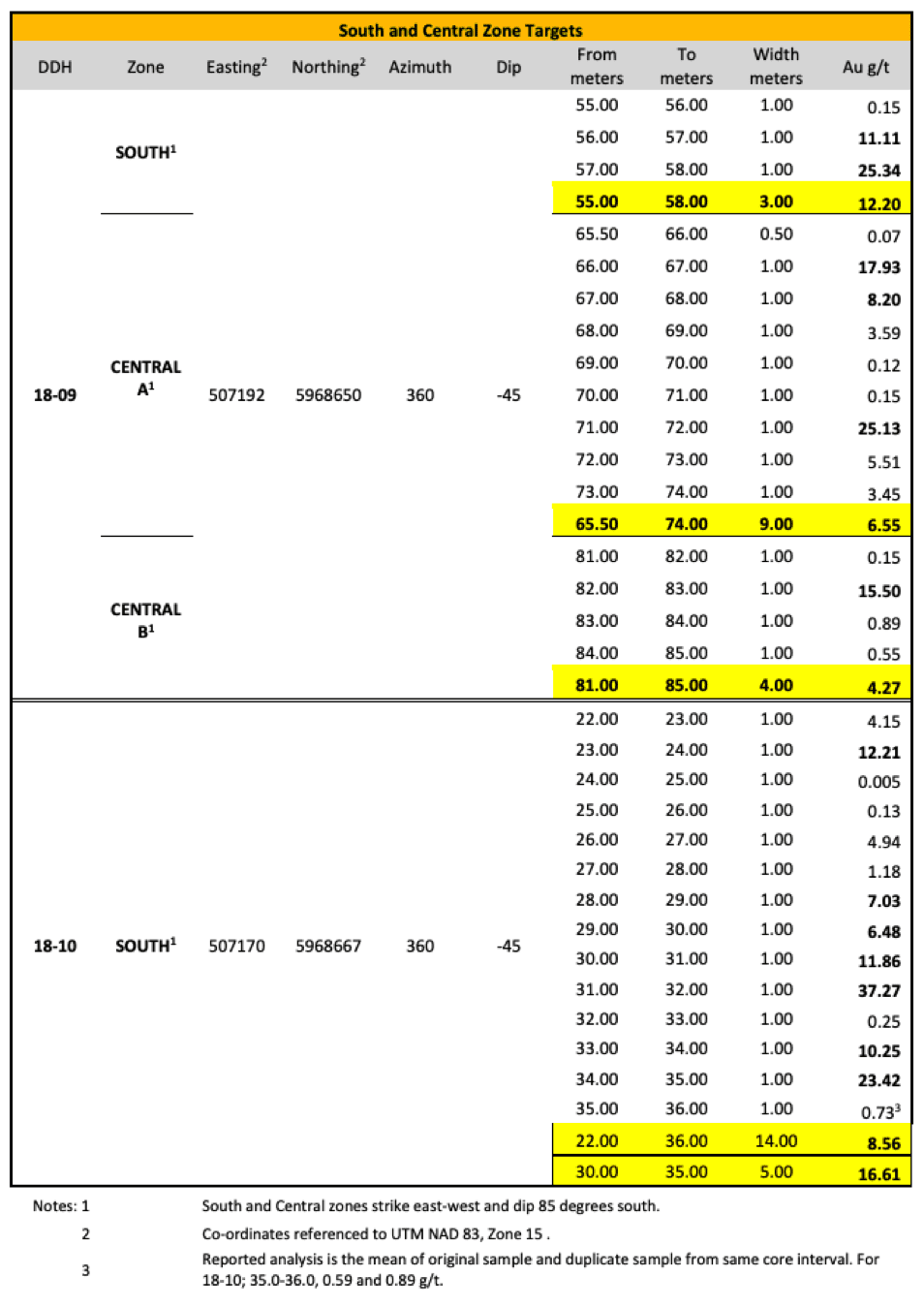 In April 2019, Signature Resources received additional interpreted results from its airborne geophysical surveys. The data defined an extensive area situated 12.5 kilometers west of the Lingman Lake gold mine that exhibits many of the same characteristics as other gold zones on the property. This area is known to host over 40 mineral occurrences that are reported to contain gold, copper and molybdenum mineralization. The area in question is a 1,400-hectare magnetic low within a volcanic assemblage of rocks that are typically characterized as having moderate to high magnetic intensities.

“These areas, far to the west of the Lingman gold zones, are a high priority for future exploration work. The premise that the contact zone is an extensive alteration feature along extended strike length is new for the project, but possibly explains the 40 mineral occurrences, blast trenches and historical drill holes at the west end of the property. This historical work may have been onto something, but lacked modern airborne geophysics and inversion modeling to support the targeting,” said Hanych.

In addition, the VLF-EM 55-meter depth inversion slice defines a semi-linear resistivity low feature, within the broader magnetic low. Two linear resistivity lows were identified. The north low trends east to west, occurs for a strike length of 10-kilometers and is situated along the main contact between the north granitic terrane and southern volcanic assemblage. The south low trends northwest-southeast and extends for 4.6-kilometers.

In October 2018, Signature Resources completed a high-resolution GPS collar survey on the property and were able to identify 84 percent of the drill casings from the drilling programs completed between 1987 and 1989.

“We are very pleased with this result and we are very fortunate that the located holes had their casing intact. Quite often the drill casing, which goes through the overburden and is anchored to bedrock at its lower end, is removed leaving no surface evidence of the hole. Now that these casings have been located to a sub-meter accuracy (60 centimeters), we have the confidence level that we need to refine our geological model. We are also able to geo-reference other features in relation to the drill holes with a greater degree of accuracy, allowing us to produce better property-scale maps,” said Hanych.

Signature Resources is preparing for its winter exploration program focused on further exploring and expanding the current resource. The company also anticipates the completion of an updated resource estimate for the property. The resource estimate is expected to include the results from the company’s 2018 and future drill programs and the verified samples from the historical resource estimate.

Walter Hanych is a graduate geologist (B.Sc. Hon. Geology from Laurentian University, Sudbury, Ontario) and has 33-years of experience in varied geological environments throughout Canada and internationally. He has held positions as chief geologist and project manager on projects ranging from grass-roots to advanced mine exploration and resource development/feasibility and has been involved with various public and private resource companies with finance and corporate structure. Hanych is a registered P.Geo. in Ontario and Saskatchewan, and is a member of the Prospectors and Developers Association of Canada and Society of Economic Geologists. Since 1993 Hanych has provided his services as a geological consultant.

Jonathan Held is a chartered professional accountant and chartered accountant with CFO-level experience with both private and public companies. Held has worked with a number of domestic and international-resource-based businesses, including those in South America, Eastern Europe and Africa. Held has been involved in numerous successful public market transactions, including initial public offerings, reverse takeovers and financings. Held holds a bachelor of mathematics and master of accounting from the University of Waterloo.

Stephen Timms has enjoyed a successful career of over 25-years at IBM Canada. During his career at IBM, Timms has gained significant broad-based functional expertise in operations, business transformation, change management and finance. In his career with IBM. Timms has participated in numerous executive, management and leadership development courses developing his analytical skill as an innovative problem solver. He is an experienced investor in the junior mining sector. Timms holds a four-year Bachelor of Commerce degree from the University of Toronto.

*Disclaimer: The profile provides information which was sourced and approved by Signature Resources (TSXV:SGU, OTCQB:SGGTF,  FSE:3S3) in order to help investors learn more about the company. Signature Resources is a client of the Investing News Network (INN). The company’s campaign fees pay for INN to create and update this profile page, to which links are placed on Investingnews.com and channel newsletters.