Investing News Network
Conquest Resources Limited is pleased to announce today that it has entered into a Purchase and Sale Agreement with Stevens Geophysics Inc. whereby Conquest will acquire a 100% interest in the Nipigon Rift Property located south of Black Sturgeon Lake, Nipigon, Ontario. Conquest can earn a 100% interest in the Nipigon Rift Property, comprised of 100 contiguous cells by issuing 200,000 shares per year over 4 years, ...

Conquest Resources Limited (TSXV: CQR) ("Conquest") is pleased to announce today that it has entered into a Purchase and Sale Agreement with Stevens Geophysics Inc. (SGI), whereby Conquest will acquire a 100% interest in the Nipigon Rift Property located south of Black Sturgeon Lake, Nipigon, Ontario.

This news release should be read in conjunction with the Company's unaudited interim consolidated financial statements and the associated management's discussion and analysis (MD&A) for the three and nine month periods ended September 30, 2021 which are available on the Company's website at www.conquestresources.com or under the Company's profile at www.sedar.com.

Conquest Resources is targeting high-grade Uranium deposits associated with veins and faults at or near the Archean-Proterozoic unconformity, and Proterozoic rift mafic intrusive Ni-Cu-PGE deposits near the unconformity south of Black Sturgeon Lake, in the Lake Nipigon Basin (LNB). As exemplified in the Athabasca Basin, unconformity related Uranium deposits are all associated with faults and fracture systems proximal to the regional unconformity. The Sibley Group of continental sedimentary rocks have been identified above the unconformity with the pre-Cambrian basement in the Lake Nipigon area. Uraniferous veins of the unconformity type are found at the Split Rapids Dam and Canyon occurrences, both located to the north of the Property. Historical intersections at Split Rapids Dam range from 0.012% U3O8 over a core length of 0.30 m in drill hole BS05-13, to 2.99% U3O8 over a core length of 1.5 m in drill hole BS05-30. Other occurrences, such as Greenwich Lake occur regionally, resemble the Athabasca unconformity type and have the best potential for the presence of uranium deposits. In the Lake Nipigon Basin, the most probable source area for uranium deposits associated with veins and faults that are proximal to the Proterozoic/Archean unconformity is the granitoid and associated meta-sedimentary rocks of the Quetico Gneiss Belt (Figure 1). The Quetico Gneiss Belt's signature is one of anomalously high uranium background levels, as identified from Ontario Geological Survey (Scott,1987), highlighting the similarities of the Athabasca basin and the Sibley Basin geological and structural histories.

Early Proterozoic rift related mafic and ultramafic intrusive rocks are prospective for PGE-Ni-Cu deposits in the Lake Nipigon region as exemplified by the many occurrences or deposits discovered ie. Seagull, Disreali, and more recently, Thunder Bay North and Sunday Lake. Conquest believes the continental basement rocks have been subjected to intense regional faulting related to extensional basin style deformation or rifting southwest of Lake Nipigon, possibly representing a part of the Nipigon Rift system itself and consequently revealing a large extensional rift below the unconformity. In 2000-2001, 31 magnetotelluric (MT) data sites were collected across a regional northwest to southeast mapped fault system, south of Black Sturgeon Lake, and within the Nipigon project area (Figure 1). These data have recently been reprocessed and used to generate an estimate of the resistivity distribution below the profile of sites. The interpreted results are shown in Figure 2. The 31 MT site positions along the west to east profile are plotted above the color contoured resistivity estimate. Within the top 0-500m depth a low resistivity layered geologic sequence has been interpreted, reflecting a combination of Sibley sediment horizons are variably intruded by the high resistivity Nipigon diabase sills on/in the near surface layer, as observed in outcropping geology. Below 500m to greater than 2000m the resistivity increases significantly on the west and eastern parts of the profile (interpreted as resistive basement) while a large central region, 3-4 km wide, indicates lower resistivity rocks continuing to depth. Conquest interprets this to be a probable area of basin extension and/or intensive north to south fracturing/deformation on a multi-kilometre scale that may be permissive for the presence of a variety of deposit types including fault and unconformity related uranium veins and PGE-Ni-Cu bearing Proterozoic mafic and ultramafic intrusions.

Building on the Athabasca Uranium exploration and early Proterozoic rift related PGE-Ni-Cu deposits exploration models, Conquest is exploring the SW Lake Nipigon region in search for economic minerals deposits of the type formed in rifted or extensional environments (Figure 3), and employing extensive use of deep-penetrating geophysical techniques including natural field magnetotellurics and ground time domain electromagnetic geophysics. Other field work will include structural mapping as a thick cover of Sibley Group sediments, intruded by Nipigon sills, blankets the area.

Conquest intends to commence a Phase 1 drill program in the first half of 2022 aimed to confirm the presence of the Nipigon Rift on the Property. The program will also target a discrete, very low resistivity region just below the interpreted unconformity (Figure 2). Conquest recently staked an additional 351 cells on strong evidence of an interpreted north-south deformation zone. 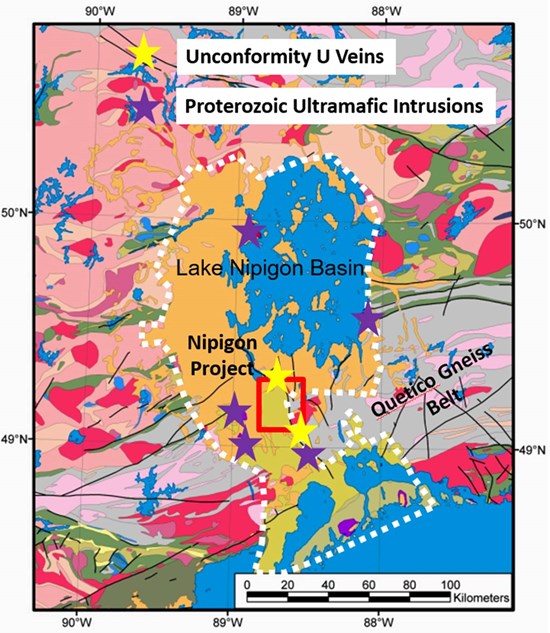 Figure 1: The location of the Nipigon Rift Property 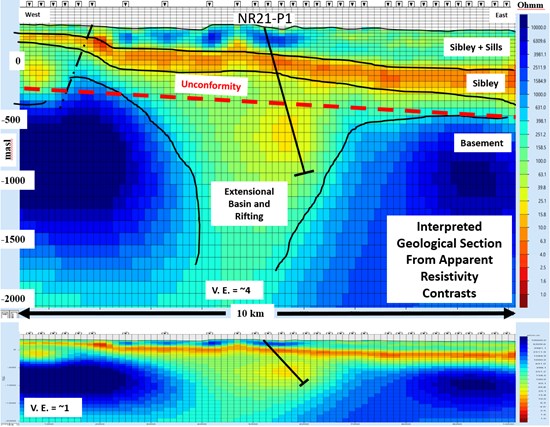 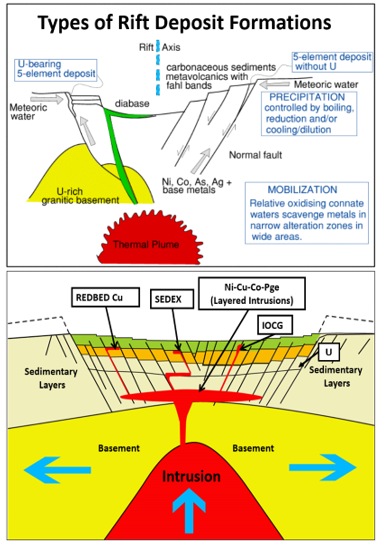 To view an enhanced version of this graphic, please visit:
https://orders.newsfilecorp.com/files/7183/104964_conquestfig3.png

For the three-month period ended September 30, 2021, the Company recorded a net loss of $1,169,011 or $0.009 per share. The operating expenses included exploration expenditures of $863,346 and stock-based compensation expense of $164,200. The increased exploration costs incurred in Q3 of 2021, in comparison with previous quarters, are resulted from the ramp-up of the Phase 1 diamond drilling program at the Company's Belfast-TeckMag Project that commenced in June 2021.

The increase in the operating loss in the nine months ended September 30, 2021, in comparison with that of 2020, is mainly resulted from the increased exploration activities and expenditures on the Belfast-TeckMag Project and the acquisition of mineral rights associated with the DGC and JPC properties in March 2021.

During the nine months ended September 30, 2021, the Company had no proceeds or expenditures from financing or investing activities. The proceeds from its previous flow-through share financing were fully expended on qualifying Canadian Exploration Expenditures at the end of June 2021. Cash used in operating activities amounted to $2,076,275 for the nine months ended September 30, 2021.

The technical content of this News Release has been reviewed and approved by Joerg Kleinboeck, P.Geo., a qualified person as defined in NI 43-101.

Conquest holds a 100% interest in the Belfast - Teck Mag Project, located in the Temagami Mining Camp at Emerald Lake, approximately 65 kilometers northeast of Sudbury, Ontario, which hosts the former Golden Rose Gold Mine and is underlain by highly prospective Abitibi greenstone geology along a strike length of seventeen (17) kilometers.

Conquest now controls over 300 sq km of underexplored territory, including the past producing Golden Rose Mine at Emerald Lake, situated in the Temagami Mining Camp.

Forward-looking statements. This news release may include certain "forward-looking statements". All statements other than statements of historical fact, included in this release, including, without limitation, statements regarding the completion of the Acquisition and the Consolidation, the release of escrowed funds, future cash on hand, potential mineralization, resources and reserves, exploration results, and future plans and objectives of Conquest, are forward-looking statements that involve various risks and uncertainties. There can be no assurance that such statements will prove to be accurate and actual results and future events could differ materially from those anticipated in such statements. Important factors that could cause actual results to differ materially from Conquest's expectations are exploration risks detailed herein and from time to time in the filings made by Conquest with securities regulators. Neither the TSXV nor its Regulation Services Provider (as defined in the policies of TSXV) accepts responsibility for the adequacy or accuracy of this release.

To view the source version of this press release, please visit https://www.newsfilecorp.com/release/104964

Vancouver, B.C. TheNewswire - November 30 th 2021 - Opawica Explorations Inc. (TSXV:OPW) (FSE:A2PEAD) (OTC:OPWEF) (the "Company" or "Opawica") announces that further to the Company's news release of November 24 th 2021, the Company has engaged the services of a Forage DCB Drilling of Rouyn-Noranda to undertake a minimum of 3,000 meters of drilling on the Bazooka Property.

Forum Energy Metals Corp. (TSXV: FMC) (OTCQB: FDCFF) ("Forum" or "the Company") is pleased to update shareholders with a review of the Company's exploration plans on its uranium, copper, nickel and palladium projects in Saskatchewan and its cobalt project in Idaho (Figure 1).

Pan Global Resources Inc. (TSXV: PGZ) (OTC Pink: PGNRF) ("Pan Global" or the "Company") is pleased to announce new high-grade copper and tin intercepts as drilling continues at the La Romana open pit copper target at the Escacena Project in the Iberian Pyrite Belt, southern Spain. Exploration has also commenced on the recently granted Al Andaluz Investigation (Exploration) Permit immediately to the east of La Romana within the Escacena Project area. The La Romana target is located less than 6 km from the former Aznalcollar open pit mine and approximately 15km west of the Las Cruces copper mine.

Tim Moody, Pan Global President and CEO states: "The latest results include the highest copper assay ever reported at La Romana with 16.8% Cu or 18.2% Cu equivalent (CuEq) over 0.7m within a 10m wide interval averaging 1.7% CuEq. The results add copper and tin mineralization near-surface in the west and downdip on several sections which confirms the deposit remains wide open in several areas. Results are awaited for several new holes, including in the far west where the copper and tin mineralization appears to be increasing towards the La Romana mine workings."

Victory Resources Corporation (CSE:VR)(FWB:VR61)(OTC PINK:VRCFF) ("Victory" or the "Company") is pleased to announce that the Company has initiated an extensive IP survey its Mal-Wen project, located in south-central British Columbia, within the eastern belt of the Nicola Group

(In United States dollars, except where noted otherwise)

Comet Resources Ltd (Comet or the Company) (ASX:CRL) is pleased to provide the successful results of the final phase of specialist test work on natural flake graphite from its Springdale Graphite Project (Springdale) located in Western Australia. The results of optimisation work aimed at improving the yield in the production of spherical graphite (SPG) were highly successful. By classifying the material in an air classifier into fine and coarse fractions to separate the fines fraction prior to the production of the SPG, yield was improved from 30-40% in prior testing, to 60%, which is considered a good yield. Further, as less material was input into the process of spheronisation after the classifying stage was completed, the throughput increased and energy consumption was reduced.

Fabled Definition Drilling to the East Hits Near Surface Mineralization with 257.81 g/t Ag Eq over 1.20 meters in Broader 3.7 Meter Zone

Tocvan Announces Start of Exploration at Pilar and Updates on Financing