This first phase of metallurgical testing was designed to confirm initial flowsheet design, which uses a typical nickel sulphide ultramafic flowsheet of two stages of grind-deslime-float with magnetic separation to support recovery of magnetic minerals.  Subsequent testing during 2021 will continue to optimize various flowsheet parameters towards a final flowsheet for the feasibility study expected by year-end 2021.

" These metallurgical results are a critical step forward for the Crawford project. The 46% and 51% recovery from samples which bookend the grades in the higher-grade core compare very favourably to similar projects. The Company is incredibly pleased to deliver this excellent result in just six months, as a result of our team's deep experience and the similarity of this deposit to other project s," said Mark Selby , Chair & CEO.

" Several lab tests yielded a portion of recovered nickel with concentrate grades in excess of 30%.  The next phases of work will focus on continued flowsheet optimization and developing a broad base of test samples.  These are essential given the wide range of mineralogy in these types of deposits which typically results in nickel recoveries for a specific block ranging from 10-15% to as much as 60%. "

The Crawford Nickel-Cobalt Sulphide Project is located in the heart of the prolific Timmins - Cochrane mining camp in Ontario, Canada , and is adjacent to well-established, major infrastructure associated with over 100 years of regional mining activity.  Canada Nickel has launched wholly-owned NetZero Metals Inc. with the aim to develop zero-carbon production of nickel, cobalt, and iron at the Crawford Project. 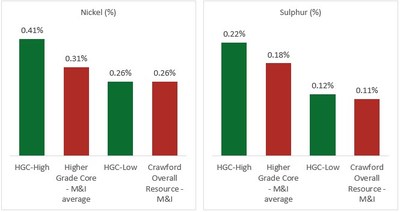 Cobalt recovery was approximately 17% for both locked cycle tests, which is expected given these samples contain primarily heazlewoodite (rather than pentlandite) which contains little cobalt.  PGM assays are pending.

Metallurgical recovery testing has been ongoing at COREM in Quebec City and XPS in Sudbury . Test work to date has been completed on multiple samples from the Crawford deposit totalling 630 kg of mineralized material from several large diameter holes drilled during 2020 and selected exploration drill core samples. The two samples selected for this current metallurgical work had nickel and sulphur grades which "bookended" the nickel and sulphur grades from the 280 million tonnes of Measured & Indicated resource in the Main Zone higher-grade core, which is expected to provide the bulk of the feed during the early mine life of the project.  More importantly, the lower grade sample also had nickel and sulphur grades which were similar to the current overall Measured & Indicated Resource for the 606 million tonnes of the project.

The first phase of testing focused on confirming the overall flowsheet design and leveraged work completed on several other projects.  The project is designed to deliver concentrates which are expected to be used in local processing facilities which would take advantage of the NetZero production potential of the project.  While the nickel concentrates could be utilized across a wide range of applications, the higher nickel/lower iron grade concentrate would be targeted at battery metal consumers, while the lower nickel/higher iron concentrate could be utilized to produce a 25-30% ferronickel product satisfying stainless steel consumers.  Given the ultramafic source of the material, magnesium oxide ("MgO") contents of the concentrate are high.  The high MgO content is not a factor in use for feeds in the stainless steel value chain in which all of the concentrate could be utilized (only nickel value of concentrate realized in this scenario – no cobalt or PGM credits).  If the high grade concentrate was processed in traditional sulphide concentrate facilities, MgO penalties would be incurred but could be partially or entirely offset by the relatively very high nickel grade of the concentrate and potential cobalt and PGM credits.

The current flowsheet is primarily comprised of two stages of grind-deslime-float.  The first stage is a relatively coarse grind of 135-150 microns and the second stage, which follows a magnetic separation step which reduces the feed to 25-30% of the initial plant feed, and is then ground to 45 microns.  The concentrates (making up less than 2% of the initial feed) is then reground and floated to generate higher and lower grade nickel concentrates.  The magnetic tailings then undergo a multi-stage magnetic cleaning to deliver a target 45-50% iron magnetite concentrate (focus on maximizing recovery rather than grade as magnetite is expected to be processed locally).

Metallurgy testing during 2021 will have two key areas of focus.  The first area of focus will be continued optimization of both the recovery and concentrate grades and the amount of grinding and reagents utilized to produce these concentrates.  The second area of focus will be continuing ongoing lab work which has highlighted the improved recovery potential from using coarser grind sizes and more aggressive desliming, to recover much of the nickel into a very high grade (nickel > 30%) concentrate as well as the potential to improve nickel recovery from the slimes portion of the material produced.

This press release contains certain information that may constitute "forward-looking information" under applicable Canadian securities legislation. Forward looking information includes, but is not limited to, mineral resource estimates relating to the Crawford Nickel-Cobalt Sulphide Project, the potential of the Crawford Nickel-Cobalt Sulphide Project, strategic plans, including future exploration and development results, and corporate and technical objectives. Forward-looking information is necessarily based upon a number of assumptions that, while considered reasonable, are subject to known and unknown risks, uncertainties, and other factors which may cause the actual results and future events to differ materially from those expressed or implied by such forward-looking information. Factors that could affect the outcome include, among others: future prices and the supply of metals, the future  demand for metals, the results of drilling, inability to raise the money necessary to incur the expenditures required to retain and advance the property, environmental liabilities (known and unknown), general business, economic, competitive, political and social uncertainties, results of exploration programs, risks of the mining industry, delays in obtaining governmental approvals, and failure to obtain regulatory or shareholder approvals. There can be no assurance that such information will prove to be accurate, as actual results and future events could differ materially from those anticipated in such information. Accordingly, readers should not place undue reliance on forward-looking information. All forward-looking information contained in this press release is given as of the date hereof and is based upon the opinions and estimates of management and information available to management as at the date hereof. Canada Nickel disclaims any intention or obligation to update or revise any forward-looking information, whether as a result of new information, future events or otherwise, except as required by law.

Queensland Pacific Metals Ltd (ASX:QPM) (“QPM” or “the Company”) is pleased to announce that it has executed a binding Heads of Agreement with Lava Blue regarding the licensing of Lava Blue’s proprietary technology for HPA production and the joint development of a Definitive Feasibility Study (“DFS”) for HPA production at the TECH Project.

Ways to Invest in Nickel

Nickel is a high-luster, silver-white base metal whose valuable applications have made it a significant and widely used material in the world today.

But where does it come from? And what exactly are those valuable applications? For investors interested in the nickel market, it's important to have answers to those questions. After all, a solid understanding of dynamics in the space is key for making sound — and profitable — investing decisions.

If you're interested in getting started on nickel investing, here's a brief overview of the nickel industry, including where it's found, what it's used for and which countries use it the most.

Talon Metals Corp. (TSX:TLO) ("Talon" or the "Company") is pleased to provide an update on the Tamarack Nickel-Copper-Cobalt Project ("Tamarack Nickel Project"), located in central Minnesota.

Blackstone Minerals Limited (“Blackstone” or the “Company”) is pleased to inform shareholders that drilling activities have recommenced at the Company’s wholly owned exploration assets in British Columbia (the Gold Bridge Project, formerly the BC-Cobalt Project).

The first drill-hole targeting a large IP anomaly at the Jewel Prospect has intersected sulfide mineralisation:

Nickel Creek Platinum Corp. (TSX: NCP) (OTCQB: NCPCF) ("Nickel Creek" or the "Company") is pleased to announce the overall results from its 2021 drilling and geophysics program which concluded during the month of August 2021 in Yukon, Canada .