Comet Resources Ltd (Comet or the Company) (ASX:CRL) is pleased to provide the results of specialist test work on natural flake graphite from its Springdale Graphite Project (Springdale) located in Western Australia.

Comet Resources Ltd (Comet or the Company) (ASX:CRL) is pleased to provide the results of specialist test work on natural flake graphite from its Springdale Graphite Project (Springdale) located in Western Australia.

The test work results demonstrated the suitability of Springdale’s graphite to undergo micronisation (in hammer mills), spheronisation and purification processes to the high specification levels necessary to produce precursor material for use in the manufacture of lithium-ion battery anodes. Additional test work will be conducted to optimise the results of the already impressive initial test results.

• Results from micronisation, spheronisation and purification met industry specification for battery anode material with purification up to 99.99% graphite content achieved

In addition, the Springdale graphite sample was also tested for performance in jet milling. Due to the fine flake size, the material was easy to micronise in a jet mill with good throughput and low energy consumption. The product was assessed as achieving industry standards for jet mill specification. Jet milled product, like lithium-ion battery anode precursor material, can also achieve premium pricing in graphite markets.

The results of the test work confirm Springdale’s graphite material is high-value and suitable for value added processing, a key factor for future project economics. No graphite project will produce 100% lithium-ion battery anode precursor material, so it is therefore necessary to have other high-value saleable graphite products for the balance of the graphite produced to achieve the highest average revenue mix. The Company considers it exceptional that Springdale’s graphite product has also performed well in jet milled tests, in addition to testing for generation of lithium-ion battery anode precursor materials.

Comet Managing Director, Matthew O’Kane, commented, “The results from the specialist test programs in Germany are fantastic! They confirm graphite material from Springdale has met key battery anode grade benchmarks as well successfully producing highvalue jet milled product. These results greatly increase the prospects for future development of the project. We will now assess future work programs, which include work to further optimise the processing of spherical graphite. With the continued push towards electrification, demand for these battery anode grade products should grow exponentially.”

The mean particle size, measured by laser analysis, was approximately 30 microns. The specific surface area is higher, however the density was lower when compared to a Chinese standard -200 mesh product.

In the jet mill, the graphite concentrate processed very well. The throughput was high, and the energy consumption was low. The products from jet milling, as confirmed by laser analysis, appear very typical for this product category. The normal range of jet mill products can therefore be produced with Springdale concentrate as feed material. All properties are in line with common standards for jet milled, with only the density after milling being lower than for normal jet milled product. This lower density may make Springdale jet milled product well suited to applications related to conductivity, where lower density products perform better.

Impact milling was carried out with a hammer mill. Again, the concentrate was used as feed material. After several samples runs stable values were achieved, and it is assumed that stable processing will also be possible in commercial production. All the properties of the product from the impact mill are quite normal, except for the density, which is also lower here, although not as low as in the case of the jet milled product.

As a first step, micronised graphite was produced without issue. Grinding tests were undertaken with the impact (hammer) mill, with two samples of an average particle size of 20 and 14 microns being produced in larger quantities. These two size fractions were then used as feed material for the spheronisation test work.

The yield is relatively low at present compared to other graphite. Normally it is possible to achieve yields approximately 50%. The yield for the Springdale material was in the 30 to 40% range. It is probably the high proportion of fines in the feed product that is separated off by the classifier which generates the lower yield. This will also undergo optimisation in future testing to improve yields. 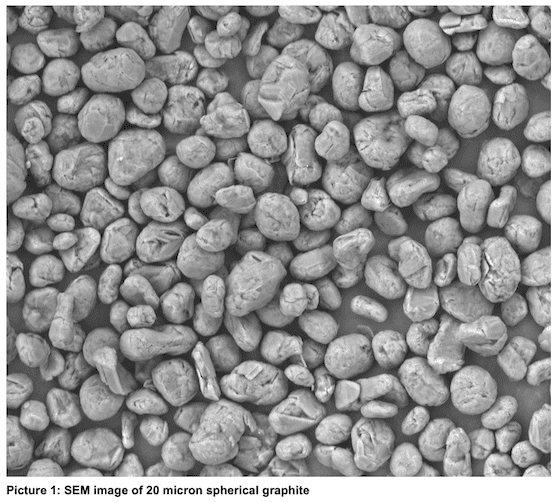 After the spheronisation was completed a sample of the material was first purified with an intensive alkaline method, based on a caustic roasting process. The purification went well. An LOI value of 99.96% (carbon content) was measured in the purified product, which is above the general minimum specification for spherical graphite of 99.95%.

Assay of the purified material was then undertaken using the Inductively Coupled Plasma (ICP) technique. Essentially all elements present in the gangue are at a low level after the purification, especially the critical detrimental elements for use in batteries, such as Iron, Silicon, Chromium and Copper, which were measured at levels below the typical specification limits for BAM. Three element assays were slightly elevated, Sodium, Nickel and Calcium. Sodium is very likely a residue from the alkaline digestion (Sodium Hydroxide) and can presumably be reduced significantly by further optimization of the purification process. The same applies for Nickel, which is most probably coming the Nickel crucible used during purification. The only element which was found in higher concentration than usual was Calcium. Presumably, a modified acid treatment can lower the Calcium value. Often a limit of 25 ppm is given for Ca. This should be achievable without great effort.

A second sample of material was then purified using Hydrofluoric Acid (HF). LOI value was measured at 99.99% (carbon content) in the HF purified product, better than the alkaline method, and nearly 100% pure carbon content. ICP assay of the HF purified material is presently underway and results will be reported once received.

Test work completed initially in 2019 and 2020 identified that graphite concentrate from Springdale, in particular in the high grade area of the resource, was quite a unique product due to its very fine size fraction, and also due the platy nature of the fine flake. Recognising that these properties may potentially have applications for BAM, a decision was made earlier in 2021 to generate a bulk sample of graphite concentrate to send to Germany for evaluation by a specialist graphite test facility. This press release details the results of that testing regime.

The design of the process flowsheet to produce the concentrate, and the preparation of the graphite concentrate itself, was performed by Independent Metallurgical Operations (IMO) in Perth, Australia. The concentrate was then shipped to ProGraphite GmbH in Untergriesbach, Germany, where the testing programs detailed in this press release were completed.

The Company is presently engaged in discussions with multiple downstream users of graphite products regarding the Springdale Graphite Project. Detailed results from the testing programs described in this press release have been shared under confidentiality agreements and management is engaged in ongoing discussions. This announcement has been authorised by the Board of Comet Resources Limited

The information in this report that relates to Mineral Resources and metallurgical test work conducted on sample material from the Mineral Resource is based on information compiled by Matthew Jones, who is a Competent Persons and Member of The Australasian Institute of Mining and Metallurgy. Matthew Jones is a consultant and was previously Exploration Manager of the Company. He has sufficient experience that is relevant to the style of mineralisation and type of deposit under consideration and to the activity being undertaken to qualify as a Competent Person as defined in the 2012 Edition of the “Australasian Code for Reporting of Exploration Results, Mineral Resources and Ore Reserves”. Matthew Jones consents to the inclusion in this report of the matters based on their information in the form and context in which it appears.