Renforth Resources Inc. (CSE :RFR) (OTC:RFHRF) (FSE:9RR) ("Renforth" or the "Company") is pleased to inform shareholders that field work has resumed, having received the required permit, on the Lalonde mineralized structure on our wholly owned 330 sq. km. Surimeau District Property in NW Quebec, located contiguous to the Canadian Malartic Mine, south of the Town of Cadillac, within the largely unexplored Pontiac Sediments. This round of surface work is a follow up on the visual mineralization encountered during channel sampling earlier in the summer, lab results for that program have not been received. In addition to the work commencing at Lalonde, outlined below, Renforth will be chipping, stripping and channel sampling target areas on the ~20km long Victoria mineralized structure, as also outlined below.

"We are very happy to get back into the field, in very dry conditions, to continue our surface work which has, to date, yielded excellent results. Lalonde is becoming quite interesting as we have the opportunity to do more work on it, this area will likely be drilled during our program anticipated for the latter half of this year. Our stripping contractor has done excellent revealing work for us to date, we are quite interested to see what he can uncover at Lalonde." states Nicole Brewster, President and CEO of Renforth.

Renforth has hired the same contractor who carried out the successful Victoria trenching program to chip/strip and channel at Lalonde. Renforth is permitted for three trenches west of the road and perpendicular to the strike of the ~9km Lalonde mineralized structure. The trenching is planned to start and finish in the Pontiac sediments, in an attempt to encompass the full mineralized package at Lalonde. The locations for the new Lalonde chipping/stripping/trenching are in the map below, which also indicates the locations of the previous trenches, for which assay results are still awaited, however, visual mineralization was present, summarized at the end of this press release. 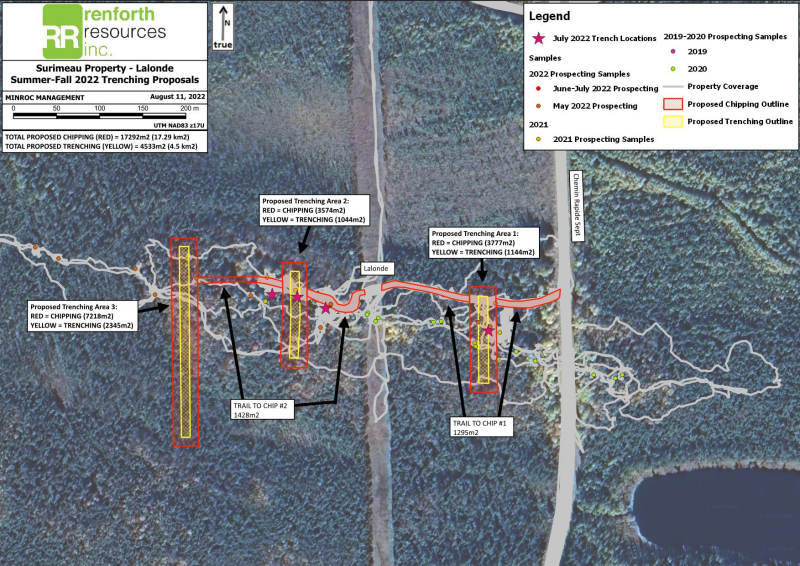 At Victoria, also located on the Surimeau District Property , approximately 3.5km south of the Lalonde area, Renforth has hired the Cooperative de solidarite de Pikogan to carry out a permitted chipping program in two specific locations within the ~20km long Victoria mineralized structure, as indicated on the map below. The first trench will run north from the central area of the previous 275m long stripped/channeled area, in order to intersect the northern band of mineralization discovered in May 2022 field work by Renforth's geologists. This mineralized band, not intersected in the previous surface work or drilling at Victoria, was discovered using the data from the detailed mag/EM survey and our ground prospecting of EM targets, which led to the discovery of visual mineralization and confirmation grab samples. The second area of chipping is located along an access road and expected to be minimal, however, it is planned to also cross the entire mineralized package (as currently understood) on surface, to allow for mapping and sampling at a second location. 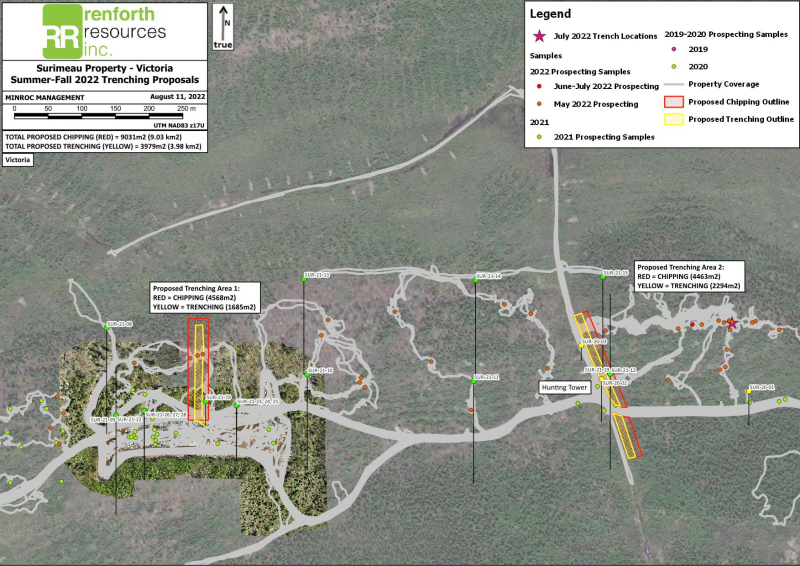 Trenches 1 through 5 were dug at Lalonde, ~3.7km north of the Victoria stripped area. Trench 5 represents an extension to the west of ~2km for the Lalonde mineralization.

The first trench exposes about 5 meters of Pontiac sediments at the north end with occasional narrow beds of graphitic mudstone, mineralized with traces of chalcopyrite and pyrite stringers. Ultramafics are found immediately south of the sediments with a narrow band of albite-shearing between the two units (approximately 50-60cm). The ultramafics have bands of calc-silicate alteration as well as bands of moderate to strong albitization with around 15-20% sulfide overall. South of the ultramafics is strongly amphibolized mafic volcanics (picrites).

From south to north this trench exposes ultramafics with varying degrees of albitization and up to 5-7% sulfide mineralization (pyrite-pyrrhotite), locally up to 15% sulfide, with traces of chalcopyrite, followed by Pontiac sediments to the end of the trench/channel, including occasional narrow beds of graphitic sediments.

This trench is 12 meters in length and exposes serpentinized ultramafics at the south end, with occasional bands of very strong biotitization to about 7m, followed by 2 meters of calc-silicate altered ultramafics with 10-15% sulfide. Sediments follow the ultramafics for about 3 meters to the end of the trench. 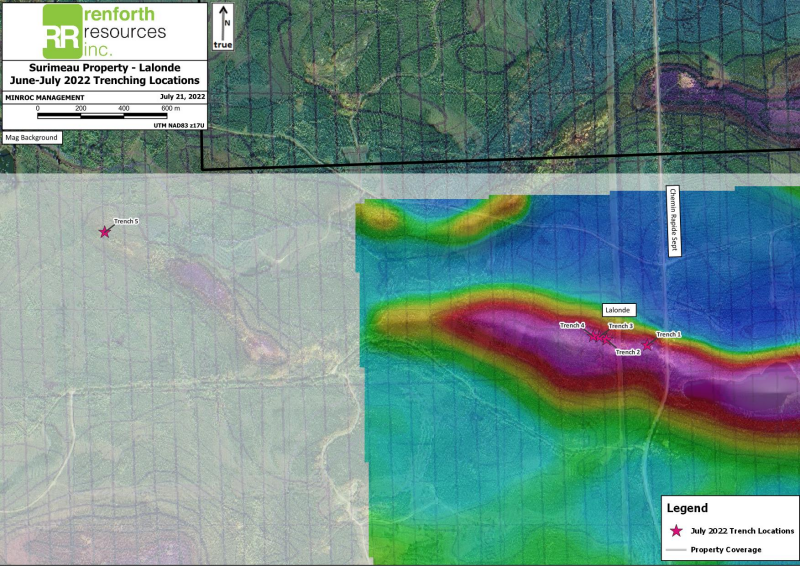 In addition, a channel was cut in the main Lalonde pit on the powerline. This channel consists of the albitized shear zone to the north and deeply weathered but strongly altered ultramafics to the south of the channel. Overall sulfides in the samples ranged from 5-7% disseminated and clots of pyrite-pyrrhotite and sphalerite. Renforth previously prospected this pit in an initial 2020 prospecting campaign which yielded up to 2.22% Zn and 0.15% Ni from grab samples.

Technical disclosure in this press release has been reviewed and approved by Francis R. Newton P.Geo (OGQ#2129), a "qualified person" pursuant to NI 43-101.

Renforth is focused on Quebec's newest battery metals district, our wholly owned ~330 km 2 Surimeau District Property, which hosts several known areas of polymetallic "battery metals" mineralization, each with various levels of exploration, as well as a significant amount of unexplored ground. Victoria West has been drilled over a strike length of 2.2km, within a 5km long mineralized structure, proving nickel, copper, zinc and cobalt mineralization, in the western end of a 20km magnetic anomaly. The Huston target, during initial reconnaissance, resulted in a grab sample grading 1.9% Ni, 1.38% Cu, 1170 ppm Co and 4 g/t Ag. Additionally, the Lalonde, Surimeau and Colonie Targets are all polymetallic mineralized occurrences which, along with various gold showings, comprise the areas of potential of this NSR free property.

In addition to the Surimeau District battery metals property Renforth wholly owns the Parbec Gold deposit, a surface gold deposit contiguous to the Canadian Malartic Mine property in Malartic, Quebec. In 2020/21 Renforth completed 15,569m of drilling which successfully twinned certain historic holes, filled in gaps in the resource model with newly discovered gold mineralization and extended mineralization deeper. Based upon the success of this significant drill program the Company considers the spring 2020 MRE, with a resource estimate of 104,000 indicated ounces of gold at a grade of 1.78 g/t Au and 177,000 inferred ounces of gold at a grade of 1.78 g/t Au to be out of date. With the new data gained Renforth will undertake to complete the first ever structural study of the mineralization at Parbec, as well as additional total metallic assay work in order to better contextualize the nugget effect on the gold mineralization.

Renforth also holds the Malartic West property, the site of a copper/silver discovery, and Nixon-Bartleman, west of Timmins Ontario, with gold present on surface over a strike length of ~500m.

No securities regulatory authority has approved or disapproved of the contents of this news release.

April 13, 2022 - TheNewswire - Renforth Resources Inc. (CSE:RFR) (CNSX:RFR.CN) (OTC:RFHRF) (FSE:9RR) ("Renforth" or the "Company") is pleased to inform shareholders that the 935-line km detailed airborne Mag and Electromagnetic survey over the ~20km between the Victoria West and Colonie battery minerals occurrences at Surimeau, also extended north to the LaLonde battery minerals occurrence at Surimeau, has been successfully completed. The magnetic survey clearly delineates the ~20km long Victoria structure with greater detail than what was previously available. The EM survey, a method chosen as it will measure the presence of sulphides to a depth of ~50m, resulted in EM anomalies throughout the length of the Victoria structure. In addition, LaLonde, approximately 3km to the north, also registered the magnetic structure with co-incident EM anomalies. The area surveyed at LaLonde covered the area, which was historically drilled, outlining the presence of battery minerals over a strike length of 2.2km. The survey has outlined a considerable amount of EM anomalies beyond the extent of any recent drilling or trenching.

TheNewswire - March 29, 2022 - Renforth Resources Inc. (CSE:RFR) (CNSX:RFR.CN) (OTC:RFHRF) (FSE:9RR) ("Renforth" or the "Company") is pleased to inform shareholders of the assay results from the 1,203m drilled in 7 holes within the 275m strike length of the stripped area at Victoria West, one of several mineralized areas within our >300 km 2 Surimeau District Property in NW Quebec. SUR-21-28 was drilled for 234m at a dip of -80 as an undercut of SUR-21-26 and SUR-21-27 in the western end of the stripped area, between two historic trenches now within the stripped area. SUR-21-28 assayed 3.46% Ni and 491 ppm Co over 1.5m between 196.5 and 198m down the hole as presented in the table below, within a broad mineralized zone of 170.55m, between 40.9 and 211.45m down the hole which averaged 0.16% Ni and 100.2 ppm Co . Within this broad zone of mineralization there are higher grade sub-zones, as seen in this and other holes drilled in the December program, in this case the zone between 187.5 and 199.5m down the hole, a length of 12m, averaged 0.54% Ni and 138.7 ppm Co , encapsulating the 3.46% Nickel value. Renforth's current interpretation of the mineralization seen at Victoria West is that there are higher grade bands of mineralization within the extent of the mineralized magnetic ultramafic body. The exceptional 3.49% Ni value points to the high grade potential present at Victoria West, which has only seen 5,626m of drilling by Renforth over 2.2km of strike within the known 6km strike length of Victoria West, in the western end of a 20km long magnetic feature also mineralized at its eastern end.

Horizonte Minerals Plc (AIM:HZM)(TSX:HZM), a nickel company with two Tier 1 assets in Brazil, is pleased to announce that its 100% owned Araguaia Nickel Project, currently in development, has been approved as a Strategic Minerals Project by the Brazilian Federal Government. This approval will ensure that the Araguaia Nickel Project is treated on a priority basis by the various Government agencies engaged in the construction and operation of the mine, through the support of an Inter-ministerial committee

Talon Metals Corp. (TSX: TLO) (OTC Pink: TLOFF) ("Talon" or the "Company") and the Development Partner Institute ("DPI Mining") are pleased to announce that Talon has joined as a Supporter for the Responsible Sourcing Coalition, or RESCO.

DPI Mining and Talon share a vision for sustainability across the whole value chain and are committed to furthering the conversations and work amongst stakeholders to drive responsible sourcing in the mining sector. DPI Mining is thrilled to welcome Talon as a supporter of the work DPI Mining is doing in RESCO.

Blackstone Minerals Limited (“Blackstone” or the “Company”) is pleased to provide an update on exploration progress at its Gold Bridge Au and Ni-Co Project in British Columbia (formerly the BC-Cobalt Project) and Twilight Ni-Cu Sulfide Project in Labrador.
Keep reading...Show less
Melissa Pistilli

The future for the global nickel market looks bright as the electric vehicle (EV) industry continues to grow exponentially — this could spur further mining activity in the world’s top nickel-producing countries.

Demand for nickel as a battery metal and an important component in stainless steel fabrication continues to grow, and companies and countries alike are eager to jump on the nickel production bandwagon and make their mark.

With that in mind, it’s worth knowing about the top hot spots for nickel production. Here the Investing News Network presents the top nickel-producing countries of 2021, based on the latest US Geological Survey data.