Ivanhoe Mines Co-Chairs Robert Friedland and Yufeng “Miles” Sun are pleased to announce today that the Kamoa-Kakula copper joint venture has agreed to immediately proceed with orders for the long-lead equipment for the second, 3.8 million tonne per annum concentrator module at the Kakula mine.

Ivanhoe Mines (TSX: IVN) (OTCQX: IVPAF) Co-Chairs Robert Friedland and Yufeng “Miles” Sun are pleased to announce today that the Kamoa-Kakula Copper joint venture has agreed to immediately proceed with orders for the long-lead equipment for the second, 3.8 million-tonne-per-annum (Mtpa) concentrator module at the Kakula Mine, which will double the mine’s processing capacity from 3.8 Mtpa to 7.6 Mtpa.

The earlier than planned placement of the orders for the concentrator’s long-lead equipment is expected to accelerate the completion of the Phase 2 mill expansion from Q1 2023 to Q2 2022.

“There are many smart people in the mining industry who strongly believe that copper is quickly approaching a supply and demand divergence; where the amount of copper being produced globally will be far outstripped by demand,” said Mr. Friedland. “As such, we want to ensure that the Kamoa-Kakula operation reaches its near-term production potential as expeditiously as possible, while also maintaining our strong balance sheet.”

“Getting into the queue now for the critical long-lead-time items, such as the ball mills, costs very little up-front money and enhances our flexibility to quickly move ahead on the first of multiple planned expansions.”

“The recent, independently-prepared pre-feasibility study for the expanded, 7.6 Mtpa mining operation – sourcing ore from both the Kakula and Kansoko mines – highlights the exceptional economic returns of this second phase development. Notably, the study outlines an after-tax NPV8% of US$6.6 billion and an IRR of 69% over a 37-year mine life, as well as payback of just 2.5 years,” Mr. Friedland added. “This economic model assumes a copper price of US$3.10 per pound, although at least one major global investment bank is forecasting prices ranging from US$3.20 to US$3.60 per pound over the next six to twelve months based on its view that a supply deficit will form in 2021. The studies also assume that financing will be on the basis of 100% equity, providing the opportunity to increase returns by leveraging commercial or other debt facilities.”

Construction of Kakula’s initial 3.8-Mtpa processing plant is well underway, with the remaining long-lead items already delivered to site, with the exception of the transformers, expected in October. The bulk of the structural steel has already been delivered to site. Ivanhoe Mines is fully-financed to Phase 1 copper production at the Kakula Mine, which is scheduled for Q3 2021, with consolidated cash of approximately US$496 million at the end of June 2020 and no significant debt. 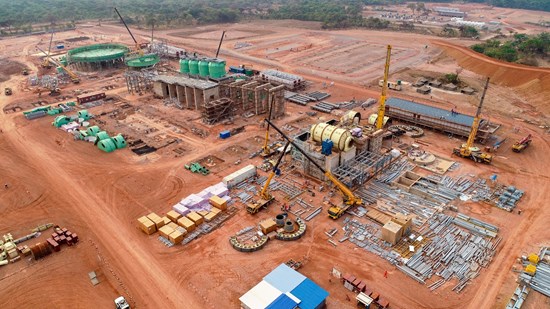 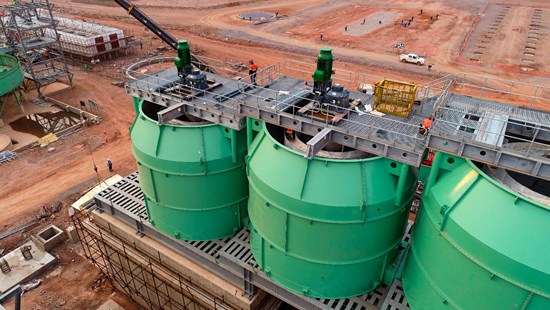 In order to bring forward the expansion of the Kakula processing plant from 3.8 million tonnes per annum (Mtpa) to 7.6 Mtpa from Q1 2023 to Q2 2022, the Kamoa-Kakula joint venture will order long-lead items with a total commitment value of approximately US$100 million within the coming weeks, of which an estimated US$25 million is expected to be spent this year.

In parallel, Ivanhoe and Zijin are in advanced discussions with respect to various financing proposals at the joint-venture level, including an equipment-financing facility, a line of credit, and project financing. Ivanhoe expects that one, or more, of the financing facilities will be successfully concluded in the fourth quarter of this year. Ivanhoe will continue to fund its share of approximately 50% of the expansion costs until such a time that an alternative financing facility has been concluded.

At the end of August, the project’s pre-production surface ore stockpiles totalled an estimated 671,000 tonnes grading 3.36% copper, including 116,000 tonnes of high-grade ore grading 6.08% copper. The stockpile grade should continue to increase as the project approaches initial production; as beginning this month the majority of mining at Kakula is expected to be in the ore zone near the centre of the deposit that has copper grades of between 5% and 8%.

Given that the underground development completed to date is well ahead of schedule, the project’s engineers are working to further optimize the mine plans outlined in the recent definitive feasibility study and pre-feasibility study in order to accelerate the ramp-up of the mine and increase the tonnes of ore in the stockpile which may be processed through the expanded processing plant. 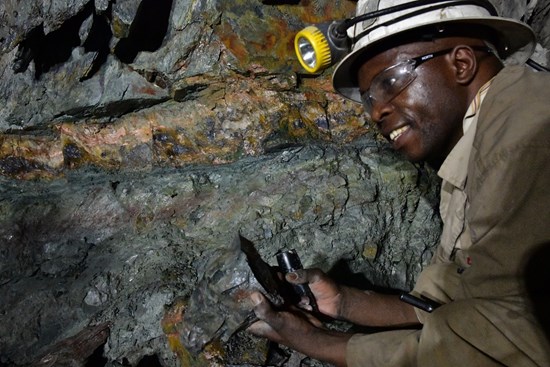 Miner Jacques Kitobo, examines a piece of ore from an ultra-high-grade working face in the room-and-pillar section of Kakula Mine, near the northern declines. Kakula’s high concentration of the gray-coloured, chalcocite ore (chalcocite is almost 80% copper by weight) accounts for the mine’s estimated high average feed grade of 6.6% copper over the first five years of operations, and 5.2% copper on average over a 21-year life. 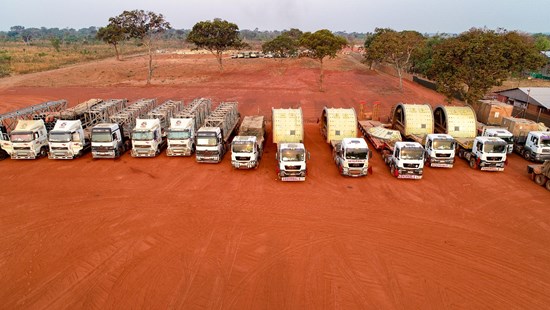 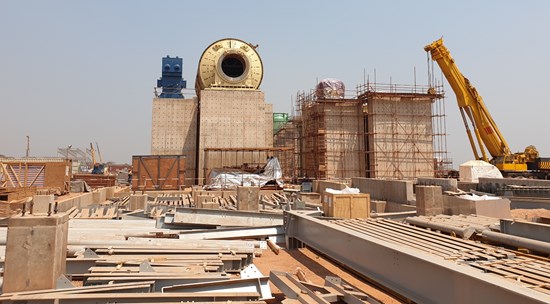 Phased expansion scenario to 19 Mtpa in the new Kamoa-Kakula IDP 2020 would position Kamoa-Kakula as the world’s second largest copper mining complex, with peak annual copper production of more than 800,000 tonnes.

The estimated remaining initial capital cost is approximately US$0.7 billion, based on commissioning the Phase 2 mill expansion in Q1 2023. Ivanhoe’s share is approximately 50%, with subsequent expansions funded by cash flows.

The new DFS evaluates the stage-one, 6-million-tonnes-per-annum (Mtpa) Kakula Mine currently being constructed. The PFS evaluates mining 1.6 Mtpa from the Kansoko Mine, in addition to 6 Mtpa from Kakula, to fill a 7.6-Mtpa processing plant at Kakula. The PEA evaluates an integrated, multi-stage development to achieve a 19-Mtpa production rate.

The full scope of the expanded facilities covered by the PFS includes: underground expansion at the Kakula Mine to reach an annual production rate of 6 Mtpa; the ramp-up of mining operations at the Kansoko Mine to a steady state 1.6 Mtpa; a second 3.8-Mtpa concentrator module at Kakula; and associated surface infrastructure to support the expansion at the various sites.

Disclosures of a scientific or technical nature regarding the Kamoa-Kakula Project in this news release have been reviewed and approved by Steve Amos, who is considered, by virtue of his education, experience and professional association, a Qualified Person under the terms of NI 43-101. Mr. Amos is not considered independent under NI 43-101 as he is the Head of the Kamoa-Kakula Project. Mr. Amos has verified the technical data disclosed in this news release.

Other disclosures of a scientific or technical nature in this news release have been reviewed and approved by Stephen Torr, who is considered, by virtue of his education, experience and professional association, a Qualified Person under the terms of NI 43-101. Mr. Torr is not considered independent under NI 43-101 as he is the Vice President, Project Geology and Evaluation. Mr. Torr has verified the other technical data disclosed in this news release.

The stockpile grade estimates contained in this news release are based upon bulk ore sampling from underground headings. Sampling is done on each heading every second blast and three 5-kilogram samples are taken. The samples are pulverized at the project’s onsite laboratory and analyzed used using a portable XRF (pXRF) instrument. Kamoa Copper has routinely analyzed its exploration drill core for copper using pXRF, in addition to analysis at a commercial laboratory using four acid digest and ICP-OES. This data has demonstrated that pXRF results can be relied upon for grade control and run-of-mine sampling.

Ivanhoe Mines has prepared a current, independent, NI 43-101-compliant technical report for the Kamoa-Kakula Project, which is available on the company’s website and under the company’s SEDAR profile at www.sedar.com:

A new independent, NI 43-101-compliant technical report for the Kamoa-Kakula Project, is being prepared and will be filed on SEDAR at www.sedar.com and on the Ivanhoe Mines website at www.ivanhoemines.com within 45 days of the issuance of Ivanhoe’s September 8, 2020, news release.

Ivanhoe Mines is a Canadian mining company focused on advancing its three principal projects in Southern Africa: the development of new mines at the Kamoa-Kakula copper discoveries in the Democratic Republic of Congo (DRC) and the Platreef palladium-platinum-nickel-copper-rhodium-gold discovery in South Africa; and the extensive redevelopment and upgrading of the historic Kipushi zinc-copper-germanium-silver mine, also in the DRC. Ivanhoe also is exploring for new copper discoveries on its wholly-owned Western Foreland exploration licences in the DRC, near the Kamoa-Kakula Project.

Certain statements in this news release constitute “forward-looking statements” or “forward-looking information” within the meaning of applicable securities laws. Such statements and information involve known and unknown risks, uncertainties and other factors that may cause the actual results, performance or achievements of the company, its projects, or industry results, to be materially different from any future results, performance or achievements expressed or implied by such forward-looking statements or information. Such statements can be identified by the use of words such as “may”, “would”, “could”, “will”, “intend”, “expect”, “believe”, “plan”, “anticipate”, “estimate”, “scheduled”, “forecast”, “predict” and other similar terminology, or state that certain actions, events or results “may”, “could”, “would”, “might” or “will” be taken, occur or be achieved.

As well, all of the results of the pre-feasibility study for the Kakula copper mine and the updated and expanded Kamoa-Kakula Project preliminary economic assessment constitute forward-looking statements or information, and include future estimates of internal rates of return, net present value, future production, estimates of cash cost, proposed mining plans and methods, mine life estimates, cash flow forecasts, metal recoveries, estimates of capital and operating costs and the size and timing of phased development of the projects. Furthermore, with respect to this specific forward-looking information concerning the development of the Kamoa-Kakula, the company has based its assumptions and analysis on certain factors that are inherently uncertain. Uncertainties include: (i) the adequacy of infrastructure; (ii) geological characteristics; (iii) metallurgical characteristics of the mineralization; (iv) the ability to develop adequate processing capacity; (v) the price of copper, nickel, zinc, platinum, palladium, rhodium and gold; (vi) the availability of equipment and facilities necessary to complete development; (vii) the cost of consumables and mining and processing equipment; (viii) unforeseen technological and engineering problems; (ix) accidents or acts of sabotage or terrorism; (x) currency fluctuations; (xi) changes in regulations; (xii) the compliance by joint venture partners with terms of agreements; (xiii) the availability and productivity of skilled labour; (xiv) the regulation of the mining industry by various governmental agencies; (xv) the ability to raise sufficient capital to develop such projects; (xiv) changes in project scope or design, (xv) political factors, and (xvi) the impact and effect of COVID-19.

Forward-looking statements and information involve significant risks and uncertainties, should not be read as guarantees of future performance or results and will not necessarily be accurate indicators of whether or not such results will be achieved. A number of factors could cause actual results to differ materially from the results discussed in the forward-looking statements or information, including, but not limited to, unexpected changes in laws, rules or regulations, or their enforcement by applicable authorities; the failure of parties to contracts with the company to perform as agreed; social or labour unrest; changes in commodity prices; and the failure of exploration programs or studies to deliver anticipated results or results that would justify and support continued exploration, studies, development or operations.

To view the source version of this press release, please visit https://www.newsfilecorp.com/release/64241