Barksdale Resources Corp. is pleased to provide details of its planned 2021 technical program at the San Javier copper-gold project in Sonora, MexicoHighlights:An initial program of 5,000 meters of drilling is planned to begin in July, pending receipt of various approvals.Drill testing will begin at the Cerro Verde zone, where previous work has outlined significant near surface oxide copper and gold mineralization …

Barksdale Resources Corp. (“Barksdale” or the “Company”) (TSXV:BRO) (OTCQX:BRKCF) is pleased to provide details of its planned 2021 technical program at the San Javier copper-gold project in Sonora, Mexico

Rick Trotman, President and CEO of Barksdale stated: “We are very excited to begin testing our initial targets identified by our recent relogging program, which we believe could add significantly to the project in terms of understanding the controls to mineralization and should allow us to update historic resource estimates later this year. With the first holes expected to commence within the next six to eight weeks, this comprehensive program and the results that follow will certainly be an exciting time for Barksdale and its shareholders.”

The San Javier project hosts multiple zones of copper-gold mineralization interpreted to be associated with an iron oxide-copper-gold (IOCG) style system, hosted within Laramide-age intermediate-to-felsic volcanic rocks. Historic drilling has intersected up to 200-meter-thick intervals of copper mineralization hosted primarily within hydrothermal-tectonic breccias and associated stockworks. Historic drilling demonstrates that the original sulfides, primarily chalcopyrite, have been oxidized to various depths, including up to 200 meters along structures.

Of the three identified zones of mineralization, Cerro Verde is the most advanced exploration stage target at San Javier, with drilling campaigns last active during the 2005 to 2008 timeframe. The last company to actively explore and drill at the project was Constellation Copper Corp. (“Constellation”) and its most recent project report was a Preliminary Economic Assessment prepared by International Mining Consultants, Inc. titled “Technical Report on the San Javier Copper Project, Sonora, Mexico” and effective December 20, 2007 (“IMC Report”). The table and data below are taken from the IMC Report, which is available for review under Constellation’s profile on SEDAR. Please refer to the IMC Report for further details and all assumptions and qualifications used.

San Javier Historic Resource Estimate above a 0.05% recoverable copper cut-off based on a $2.50 per pound copper price.

Barksdale is not treating these historical estimates at San Javier as current mineral resources as a qualified person on behalf of Barksdale has not done sufficient work to classify such estimates are current mineral resources. Accordingly, such estimates should not be relied upon. However, Barksdale’s technical team is currently completing the work necessary to verify or replace the historic estimates at San Javier and believes that such estimates can be used as a guide in determining future exploration drilling. In this regard, the Company is currently undertaking a comprehensive review of available data in order to build an updated geologic model that incorporates key geologic and structural data that appear to control the focus of mineralization at Cerro Verde.

Barksdale has developed an initial 5,000-meter drill program at San Javier, the goal of which is to both increase the geologic confidence and to confirm structural and lithologic mineralization controls, including controls to mineralization at the Cerro Verde zone, which will in-turn guide further drilling. Drill targets for the upcoming program are being generated from our current relogging activities, which are aiding the construction of an updated three-dimensional geologic model.

The Phase I drilling program at Cerro Verde will begin with a single diamond drill rig, utilizing oriented core, focused on i) confirming zones of historically drilled mineralization, ii) determining the orientation of certain structures that appear to be focusing the higher-grade copper and gold mineralization, iii) infilling existing zones of mineralization where drilling data is widely spaced, and iv) refining our understanding of controls and dimensions to mineralization. Results from the Phase I program will then support Barksdale’s longer-term plan to generate and drill test targets at other areas within the San Javier concessions. Additionally, multiple large diameter core holes will be drilled to collect material to initiate metallurgical column leach test work.

Recent surface mapping and core re-logging activities have identified an important role for low-angle, west-dipping faults that are interpreted to have formed major conduits for mineralizing fluids. The interpreted intersections of low-angle faults with higher-angle east-dipping faults are a primary target for the initial drilling program. These interpreted intersections have produced some of the higher-grade intersections in historic drilling but have not been adequately tested to show continuity or scale. Additional targets include covered zones where mineralization is believed to have been offset by post-mineral faulting, which remain untested by previous drilling. 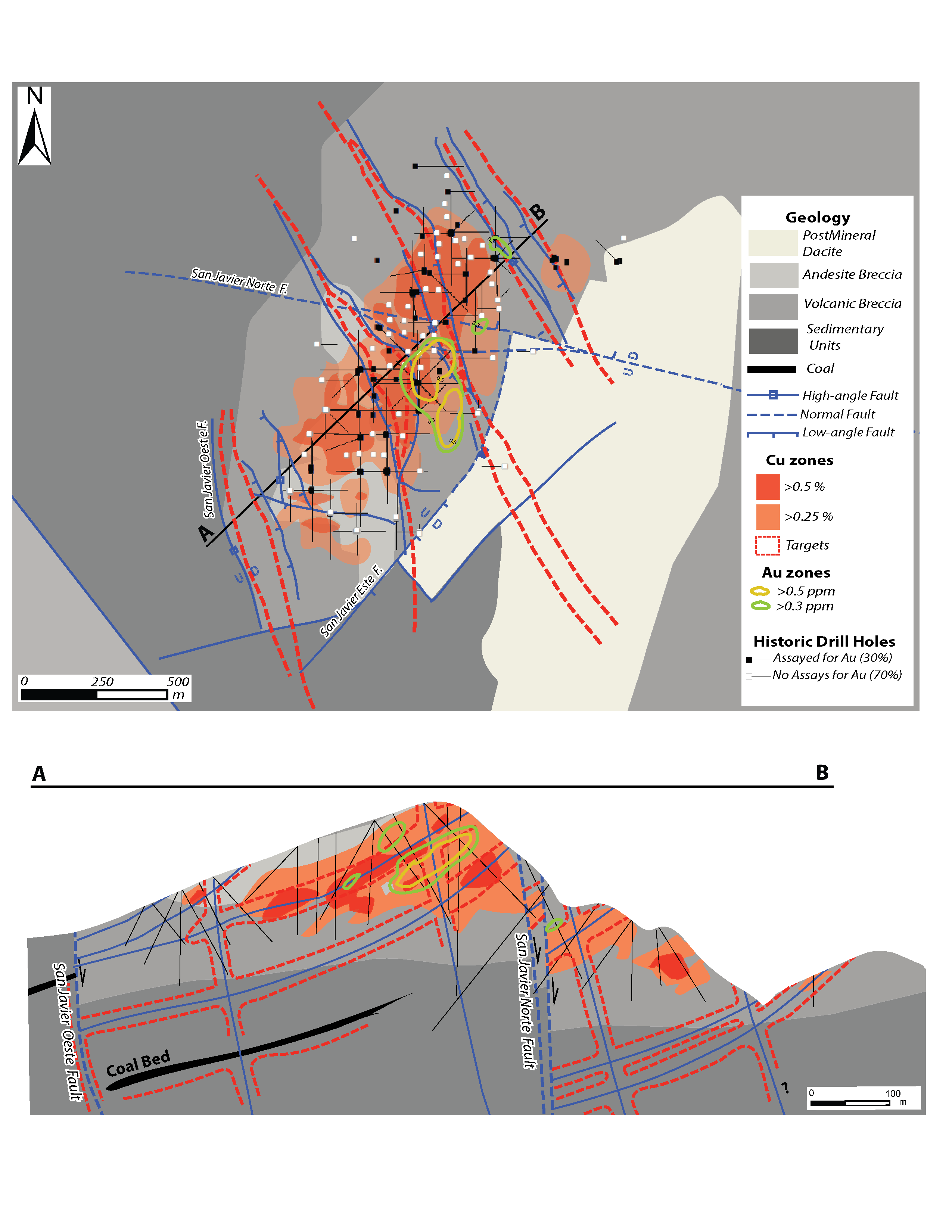 To initiate the Phase 1 drilling program at Cerro Verde, Barksdale will need to have completed the federal permitting process and receive approval from the local community which controls the surface rights at the San Javier project.

Barksdale’s local subsidiary, Estrella del Cobre S.A. de C.V., has applied to Mexico’s environmental authority (“SEMARNAT”), requesting approval to complete surface drilling at San Javier. Based on preliminary estimates, the permitting process should conclude in the coming weeks. The Company is in the process of selecting a drilling contractor so that drilling can be initiated once the environmental approvals are in place. Barksdale is also finalizing a long-term impact benefits agreement with the community of San Javier, which controls the surface rights over the Company’s key exploration concessions. This agreement establishes a long-term framework that covers exploration and exploitation.

Scientific and technical information in this news release has been reviewed and approved by Lewis Teal, Senior Consultant to the Company and a ‘Qualified Person’ as defined under Canadian National Instrument 43-101.

Barksdale Resources Corp. is a base metal exploration company headquartered in Vancouver, B.C., that is focused on the acquisition, exploration and advancement of highly prospective base metal projects in North America. Barksdale is currently advancing the Sunnyside copper-zinc-lead-silver and San Antonio copper projects, both of which are in the Patagonia mining district of southern Arizona, as well as the San Javier copper-gold project in central Sonora, Mexico.

ON BEHALF OF Barksdale Resources CORP

CAUTIONARY STATEMENT REGARDING FORWARD-LOOKING INFORMATION: This news release includes “forward-looking information” under applicable securities legislation including, but not limited to, the ability of Barksdale to verify or replace historic estimates at San Javier as current resources, the proposed technical and drill program at San Javier and the timing thereof, the prospective deposits, targets and mineralization at San Javier and the anticipated receipt and timing of necessary governmental or third party approvals and permits. Such forward-looking information reflects management’s current beliefs and is based on a number of estimates and assumptions made by and information currently available to the Company that, while considered reasonable, are subject to known and unknown risks, uncertainties, and other factors which may cause the actual results and future events to differ materially from those expressed or implied by such forward-looking information. Readers are cautioned that such forward-looking information is neither a promise nor guarantee, and is subject to known and unknown risks and uncertainties including, but not limited to, delays in obtaining governmental or third party approvals and permits, actual results of exploration activities, unanticipated geologic formations, structures and characteristics, environmental risks, future prices of base and other metals, operating risks, accidents, labor issues, and other risks in the mining industry as well as general business, economic, competitive, political and social uncertainties, uncertain and volatile equity and capital markets and lack of available capital. There are no assurances that the Company will obtain the necessary permits for and successfully complete the proposed technical and drill program at San Javier as currently contemplated or at all. In addition, there is uncertainty about the spread of COVID-19 and variants of concern and the impact they will have on the Company‘s operations, supply chains, ability to access mineral properties, conduct due diligence or procure equipment, contractors and other personnel on a timely basis or at all and economic activity in general. All forward-looking information contained in this news release is qualified by these cautionary statements and those in our continuous disclosure filings available on SEDAR at www.sedar.com. Accordingly, readers should not place undue reliance on forward-looking information. The Company disclaims any intention or obligation to update or revise any forward-looking information, whether as a result of new information, future events or otherwise, except as required by law.