David Tupper , Southern Empire’s Vice President of Exploration, stated: “Having been involved in the Pedro Gold Project discovery, I am very excited to get a second chance to work with Commander’s Rob Cameron and to return to the mineral-endowed Mapim í area to test targets I had to leave behind. Newmont’s 2014 drill program targeted Carlin-style mineralization in the Caracol Formation and did not test the potential for epithermal, bonanza-grade gold and silver mineralization, especially in the well-defined zones of silicification and brecciation.”

Geology and Exploration History of the Pedro Gold Project Area

A drill program comprising 11 mostly vertical drill holes totalling 1,744 m (5,722 feet), of which two holes ( 409 m ) were cored and the remaining drilled by reverse circulation (“RC”), was completed in 2014 by Newmont de Mexico , S.A. de C.V (“Newmont”), a wholly owned subsidiary of Newmont Mining Corporation. This drill program was specifically designed to test for Carlin-style gold mineralization associated with the Caracol Formation (interbedded to interlaminated sandstone, shale, siltstone and minor limestone), which underlies the Ahuichila Formation conglomerates and did not target the outcropping epithermal breccias. Newmont’s drilling did, however, encounter gold within epithermal breccias including in hole LP-013-R which returned 10.5 metres grading 0.51 g Au/t from oxidized, silicified conglomerate of the Ahuichila formation.

Newmont’s 2014 drill results (see Table 1; source: Bearing Lithium Corp. News Release, July 3, 2014 ) reflect the results from surface sampling and show that gold is mostly associated with the Ahuichila Formation basal conglomerate with no Au values detected within Newmont’s primary drill target, the underlying Caracol Formation. No source or feeder structure for the Ahuichila conglomerate stratabound gold has been identified by drilling and such systems will be targeted by future Southern Empire drill programs.

In late 2019, Commander followed up on the CSAMT survey with a 70 line-kilometre Induced Polarization (“IP”) survey outlining targets, which show elevated resistivity with low to moderate chargeability, that correlate with known, surface-exposed Au zones found along the basal contact of the Ahuichila Formation conglomerate. The IP also outlined other zones having a distinguished, deep vertical expression reflecting possible structures that are interpreted to be feeder veins to the surface Au zones. See Figures 1 and 2 below. The IP survey also outlined targets beneath post-mineral cover, suggesting a much larger footprint to the known Au mineralized system.

The Pedro Gold Project mineral concessions cover private lands and consequently avoid issues with Ejido’s (communal agricultural lands). The Pedro property is in the Municipality of Mapimí in the Mexican state of Durango , approximately 80 km (50 miles) west-northwest of the city of Torreón (metropolitan area population ~1,500,000).

Access to the Pedro Gold Project is by paved Mexican Federal Highway 30 and secondary gravel roads ~30 km (18.6 miles) west of the town of Mapimí. Given the arid local climate and minimal annual rainfall, these gravel roads remain in good condition year-round. 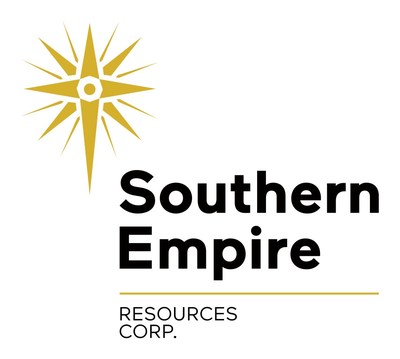 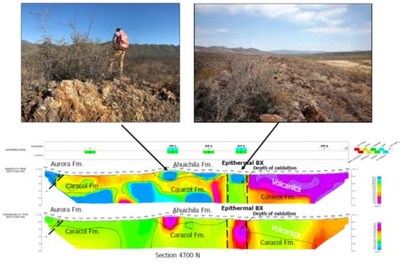 Pursuant to the Agreement, Southern Empire may, at its election and over a 3-year period, acquire a 100% beneficial interest in Minera BRG, S.A. de C.V., the Mexican subsidiary of Commander that owns a 100% interest in mineral tenements, by:

The obligations of Southern Empire pursuant to the Agreement are subject to:

Southern Empire will give notice to Commander of its intention to proceed on the date that it satisfies the foregoing conditions precedent (the “Completion Date”).

The scientific and technical information contained in this news release has been prepared, reviewed and approved by David Tupper , P.Geo. ( British Columbia ), Southern Empire’s VP Exploration and a Qualified Person (“QP”) within the context of Canadian Securities Administrators’ National Instrument 43-101; Standards of Disclosure for Mineral Projects (NI 43-101).

Southern Empire is focused on the acquisition, exploration and development of metals and minerals deposits in North America .

In the Cargo Muchacho mountains of Imperial County, California , Southern Empire owns 100 per cent of the historical gold-producing American Girl mine property and holds options to acquire a 100-per-cent interest in the adjacent 2,160-hectare (5,338-acre) Oro Cruz property located approximately 22.5 kilometres (14 miles) southeast of the operating Mesquite gold mine of Equinox Gold Corp.

At Oro Cruz, extensive historical drilling and large-scale open-pit and underground mining of the American Girl, Padre y Madre, Queen and Cross oxide gold deposits by the American Girl Mining Joint Venture (AGMJV; ultimately owned 53 per cent by MK Gold Company and 47 per cent by Hecla Mining Company) occurred between 1987 and 1996. During that time, gold was recovered by either heap leaching of lower-grade, or milling of higher-grade ores until AGMJV operations ceased in late 1996 because of declining gold prices leaving the Oro Cruz property with many gold exploration targets in addition to the historical inferred resource estimate, reported In 2011 by Lincoln Mining Corp., totalling 341,800 ounces gold based on 4,386,000 tonnes averaging 2.2 grams gold per tonne at a cut-off grade of 0.68 g/t Au (4,835,000 tons at 0.07 ounce gold per ton; Please refer to the Cautionary Notice Regarding the Oro Cruz Property Historical Resource Estimate below).

On behalf of the Board of Directors of Southern Empire Resources Corp.,
Dale Wallster , CEO and Director

Information provided in this news release may contain forward-looking information or forward-looking statements that are based on assumptions as of the date of this news release. Such information or statements reflect management’s current estimates, beliefs, intentions and expectations and are not guarantees of future performance. Southern Empire cautions that all forward-looking statements are inherently uncertain and that actual performance may be affected by a number of material factors, many of which are beyond its respective control. Such factors include, among other things: risks and uncertainties relating to Southern Empire limited operating history, the need to comply with environmental and governmental regulations, results of exploration programs on its projects and those risks and uncertainties identified in its annual and interim financial statements and management discussion and analysis. Accordingly, actual and future events, conditions and results may differ materially from the estimates, beliefs, intentions and expectations expressed or implied in the forward-looking information. Except as required under applicable securities legislation, Southern Empire undertakes no obligation to publicly update or revise forward-looking information

The historical resource estimate outlined above is disclosed in a technical report dated April 29, 2011 , prepared for Lincoln Mining Corp. by Tetra Tech, Inc. and filed on Canadian Securities Administrators’ System for Electronic Document Analysis and Retrieval (SEDAR). It is termed an inferred mineral resource, which is a category set out in NI 43-101. It was based on historical reverse circulation and core drill hole sample, underground channel sample, and blasthole sample assay results and calculated using ordinary kriging to estimate gold grades in 10-foot-by-10-foot-by-five-foot blocks. Accordingly, Southern Empire considers this historical estimate reliable as well as relevant as it represents key targets for future exploration work. However, a QP has not done sufficient work to verify or classify the historical estimate as a current mineral resource and Southern Empire is not treating this historical estimate as current mineral resources.

Neither the TSX Venture Exchange nor its Regulation Services Provider (as that term is defined in the policies of the Exchange) accepts responsibility for the adequacy or accuracy of this release. 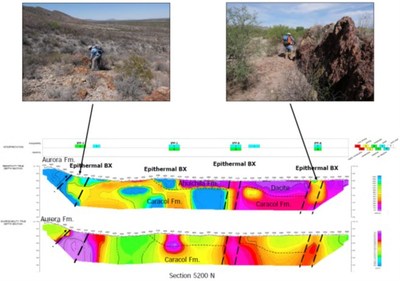