Lundin Mining Announces Interruption of Processing Activities at Chapada Mine

TSX: LUN) (Nasdaq Stockholm: LUMI) Lundin Mining Corporation ("Lundin Mining" or the "Company") announces that processing activities have been interrupted at the Chapada mine in Brazil . The operation suffered a power outage in the morning of September 27, 2020 . When power was restored, the protection system at the operation's main electrical substation failed, resulting in significant damage to all four SAG and ball mill motors.

The Company is assessing the extent of damage to the motors, but early indications are that the motors will need to be removed from site and undergo extensive repair.  The operation has two spare motors. One is on site and available and the second is offsite completing rehabilitation.  The Company is assessing the potential for a staged resumption of processing using these two motors, however full processing rates are not expected to be achievable for an extended period of time. Accordingly, full year 2020 production, cash cost and capital expenditure guidance for the Chapada mine has been withdrawn.

In addition to assessing a staged resumption of processing, the Company will be bringing forward planned maintenance and refocusing mining on waste removal and development activities.

The Company carries business interruption insurance and will be assessing the applicability of the insurance and the relevant waiting periods in deciding whether to make a claim. There were no injuries or environmental damage.

The Company will provide additional information and updates on the operation's 2020 guidance as appropriate.

Lundin Mining is a diversified Canadian base metals mining company with operations in Brazil , Chile , Portugal , Sweden and the United States of America , primarily producing copper, zinc, gold and nickel.

The information in this release is subject to the disclosure requirements of Lundin Mining under the EU Market Abuse Regulation. The information was submitted for publication, through the agency of the contact persons set out below on September 27, 2020 at 18:45 Eastern Time .

Certain of the statements made and information contained herein is "forward-looking information" within the meaning of applicable Canadian securities laws. All statements other than statements of historical facts included in this document constitute forward-looking information, including but not limited to statements regarding the Company's plans, prospects and business strategies; the Company's guidance on the timing and amount of future production and its expectations regarding the results of operations; expected costs; permitting requirements and timelines; timing and possible outcome of pending litigation; the results of any Feasibility Study, or Mineral Resource and Mineral Reserve estimations, life of mine estimates, and mine and mine closure plans; anticipated market prices of metals, currency exchange rates, and interest rates; the development and implementation of the Company's Responsible Mining Management System; the Company's ability to comply with contractual and permitting or other regulatory requirements; anticipated exploration and development activities at the Company's projects; and the Company's integration of acquisitions and any anticipated benefits thereof. Words such as "believe", "expect", "anticipate", "contemplate", "target", "plan", "goal", "aim", "intend", "continue", "budget", "estimate", "may", "will", "can", "could", "should", "schedule" and similar expressions identify forward-looking statements.

Forward-looking information is necessarily based upon various estimates and assumptions including, without limitation, the expectations and beliefs of management, including that the Company can access financing, appropriate equipment and sufficient labour; assumed and future price of copper, nickel, zinc, gold and other metals; anticipated costs; ability to achieve goals; the prompt and effective integration of acquisitions; that the political environment in which the Company operates will continue to support the development and operation of mining projects; and assumptions related to the factors set forth below. While these factors and assumptions are considered reasonable by Lundin Mining as at the date of this document in light of management's experience and perception of current conditions and expected developments, these statements are inherently subject to significant business, economic and competitive uncertainties and contingencies. Known and unknown factors could cause actual results to differ materially from those projected in the forward-looking statements and undue reliance should not be placed on such statements and information. Such factors include, but are not limited to: volatility and fluctuations in metal and commodity prices; global financial conditions and inflation; risks inherent in mining including but not limited to risks to the environment, industrial accidents, catastrophic equipment failures, unusual or unexpected geological formations or unstable ground conditions, and natural phenomena such as earthquakes, flooding or unusually severe weather; uninsurable risks; changes in the Company's share price, and volatility in the equity markets in general; the threat associated with outbreaks of viruses and infectious diseases, including the novel COVID-19 virus; risks related to negative publicity with respect to the Company or the mining industry in general; reliance on a single asset; potential for the allegation of fraud and corruption involving the Company, its customers, suppliers or employees, or the allegation of improper or discriminatory employment practices, or human rights violations; actual ore mined and/or metal recoveries varying from Mineral Resource and Mineral Reserve estimates, estimates of grade, tonnage, dilution, mine plans and metallurgical and other characteristics; risks associated with the estimation of Mineral Resources and Mineral Reserves and the geology, grade and continuity of mineral deposits including but not limited to models relating thereto; ore processing efficiency; risks inherent in and/or associated with operating in foreign countries and emerging markets; security at the Company's operations; changing taxation regimes; health and safety risks; exploration, development or mining results not being consistent with the Company's expectations; unavailable or inaccessible infrastructure and risks related to ageing infrastructure; counterparty and credit risks and customer concentration; risks related to the environmental regulation and environmental impact of the Company's operations and products and management thereof; exchange rate fluctuations; reliance on third parties and consultants in foreign jurisdictions; community and stakeholder opposition; civil disruption; the potential for and effects of labour disputes or other unanticipated difficulties with or shortages of labour or interruptions in production; uncertain political and economic environments; litigation; regulatory investigations, enforcement, sanctions and/or related or other litigation; risks associated with the structural stability of waste rock dumps or tailings storage facilities; changes in laws, regulations or policies including but not limited to those related to mining regimes, permitting and approvals, environmental and tailings management, labour, trade relations, and transportation; climate change; compliance with environmental, health and safety laws; enforcing legal rights in foreign jurisdictions; information technology and cybersecurity risks; estimates of future production and operations; estimates of operating, cash and all-in sustaining cost estimates; delays or the inability to obtain, retain or comply with permits; compliance with foreign laws; risks related to mine closure activities and closed and historical sites; challenges or defects in title; the price and availability of key operating supplies or services; historical environmental liabilities and ongoing reclamation obligations; indebtedness; funding requirements and availability of financing; liquidity risks and limited financial resources; risks relating to attracting and retaining of highly skilled employees; risks associated with acquisitions and related integration efforts, including the ability to achieve anticipated benefits, unanticipated difficulties or expenditures relating to integration and diversion of management time on integration; the estimation of asset carrying values; internal controls; competition; dilution; existence of significant shareholders; conflicts of interest; activist shareholders and proxy solicitation matters; risks relating to dividends; risks associated with business arrangements and partners over which the Company does not have full control; and other risks and uncertainties, including but not limited to those described in the "Risks and Uncertainties" section of the Annual Information Form and the "Managing Risks" section of the Company's MD&A for the year ended December 31, 2019 , which are available on SEDAR at www.sedar.com under the Company's profile. All of the forward-looking statements made in this document are qualified by these cautionary statements. Although the Company has attempted to identify important factors that could cause actual results to differ materially from those contained in forward-looking information, there may be other factors that cause results not to be as anticipated, estimated, forecast or intended and readers are cautioned that the foregoing list is not exhaustive of all factors and assumptions which may have been used. Should one or more of these risks and uncertainties materialize, or should underlying assumptions prove incorrect, actual results may vary materially from those described in forward-looking information. Accordingly, there can be no assurance that forward-looking information will prove to be accurate and forward-looking information is not a guarantee of future performance. Readers are advised not to place undue reliance on forward-looking information. The forward-looking information contained herein speaks only as of the date of this document. The Company disclaims any intention or obligation to update or revise forward – looking information or to explain any material difference between such and subsequent actual events, except as required by applicable law. 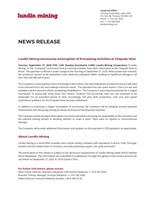 Ero Copper Corp. (TSX: ERO, NYSE: ERO) ("Ero" or the "Company") is pleased to announce the publication of its 2021 Sustainability Report (the "Report"). The Report provides an update on the Company's strategy, practices, performance and management approach to key environmental, social and governance ("ESG") topics. The Report is available on Ero's website ( www.erocopper.com ).

"This Report showcases the excellent work being performed on sustainability across our organization as well as our commitment to clear and transparent disclosure for all of our stakeholders," said David Strang, Ero's Chief Executive Officer. "This is our third annual sustainability report, and I'm pleased that each year we have meaningfully enhanced our disclosure. Of note, this year we have provided broader quantitative data on our health and safety performance, greenhouse gas ("GHG") emissions and intensity as well as the economic value generated and distributed in the regions we operate. In particular I'd like to highlight our favorable position as one of the lowest GHG intensive copper and gold producers in the world driven by Brazil's leadership in renewable energy combined with the high-grade nature of our mines. Although we are proud of our relative positioning, we believe that we can continue to improve our GHG emissions intensity and are committed to providing GHG emissions targets in our 2022 Sustainability Report.

Comet Resources Limited (Comet or the Company) (ASX:CRL), is pleased provide the Quarterly Activities Report and Appendix 5B for the quarter ending 30 June 2022 (the Quarter).

Cyprium Metals Limited (ASX: CYM) (“Cyprium” or the “Company”) is pleased to provide the following overview of the Company’s activities for the June 2022 quarter.

Lundin Mining Announces Board of Directors and Executive Leadership Appointments

TSX: LUN) (Nasdaq Stockholm: LUMI) Lundin Mining Corporation ("Lundin Mining" or the "Company") regrets to announce that the Company´s founder and former Chairman, Mr. Lukas H. Lundin, passed away on July 26, 2022 at the age of 64, following a two-year battle with brain cancer.

Sokoman and Benton Provide an Update on Drilling at the Kraken Lithium and Grey River Gold projects, Southwest Newfoundland

Gold79 Announces Private Placement Financing of up to $500,000 and Issues Shares for Gold Chain Anniversary Payment