Libero Copper & Gold Corporation is pleased to announce final assay results for the initial holes from the new Terry porphyry copper discovery at the Big Red project in BC’s Golden Triangle. Highlights 120 m of 0.41% Cueq intercepted including 70 m of 0.49% Cueq from surface. 12 m of 1.18% and 13 m of 0.81% . Greenfield porphyry copper discovery at surface and just 8 km from road access. All holes mineralized from …

“It is great to see that the technical team’s hard work this summer paid off with such strong drill results produced from a true greenfield discovery,” comments Ian Slater , Chief Executive Officer. “Broad intervals of copper-silver-gold mineralization coupled with locally very high-grade porphyry-style copper mineralization is a testament to the metal endowment at Terry and increases the project’s overall potential. We look forward to extending these holes to depth with diamond drilling and stepping out over the greater than one kilometre diameter target.” 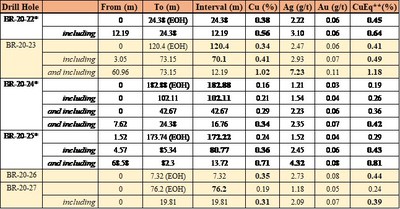 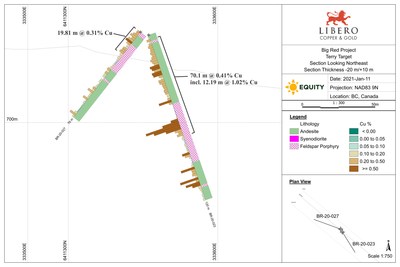 The initial targeting at the Terry target was based on its geophysical signature and its location relative to the Limpoke pluton, an intrusion phase with high mineralization potential (Jurassic aged Texas Creek Plutonic Suite). The pronounced magnetic low (Figure 2) coinciding with a conductive electromagnetic (ZTEM) anomaly (Figure 3) are consistent with the presence of a copper porphyry mineralizing system. Mineralization at the Terry porphyry copper target was confirmed in 2020 after a reconnaissance scale sampling program revealed high-grade copper and anomalous gold values extending over an area of greater than one kilometre in diameter. Previously reported grab sample grades range up to 5.54% Cu and 0.53 g/t Au (see release on July 27, 2020 ). A mapped outcrop over 300 metres by 200 metres consists of a porphyritic feldspar dyke swarm intruding plagioclase-phyric intermediate composition volcanic host rocks. Chalcopyrite mineralization occurs as fine disseminations within the porphyritic dykes and volcanic host rocks, with higher concentrations along the margins of dykes. Malachite mineralization is present locally along fracture surfaces (Photo 1).

The strong initial surficial results were received late in the 2020 season and were subsequently followed up with a total of 585 metres in six reverse-circulation (RC) holes (holes BR-20-22 to 27) off a single drill pad. Drill holes 22 (24 metres) and 26 (7 metres) were abandoned due to poor ground and re-drilled. The ultimate depth of the RC holes was limited by water issues. All the holes drilled at Terry are mineralized from surface to the end of the hole. The drill program in 2021 will utilize a diamond drill to test the depth of the newly discovered copper mineralization. Early season detailed mapping, surficial geochemistry, and ground based geophysics will be used to the refine expansionary drill targets on the Terry target. Terry’s elevation of 760 metres allows for a longer field season compared to other targets in the area.

The Terry target is located approximately 100 kilometres due west of GT Gold’s Saddle North deposit and 120 kilometres due west Newcrest’s Red Chris Mine , both which share a similar geological setting to Terry. The average copper grades for the two deposits (Saddle – 0.25% Cu, Red Chris – 0.36% Cu) are comparable to the initial drill results at Terry.

All sample assay results have been monitored through a quality control / quality assurance (QA/QC) program including the insertion of blind standards, coarse blanks, and pulp reject duplicate samples. Monitoring of the QA/QC program has determined that the analytical results are of acceptable quality. RC drilling provides a continuous sample stream which passes through a cyclone and is collected. The sample is then passed through an RC sampler where it is subdivided into an assay sample (1/8th) and a retention sample (7/8th). Sub-samples used for chip logging and on-site XRF analysis are taken from the retention sample. RC assay samples are securely transported to ALS Global’s sample preparation facility in Whitehorse , Yukon . Sample pulps are analyzed in North Vancouver, British Columbia for gold by fire assay using a 30-gram charge with atomic absorption spectroscopy (AAS) finish. Samples which exceed 9 g/t gold trigger a 30-gram fire assay with gravimetric finish. Copper and silver contents are determined by four-acid digestion with ICP-AES finish. ALS Global is an independent laboratory. Libero is not aware of any drilling, sampling, recovery or other factors that could materially affect the accuracy or reliability of the data. 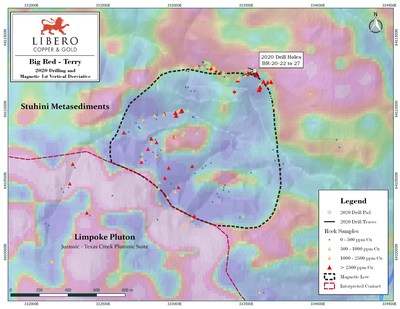 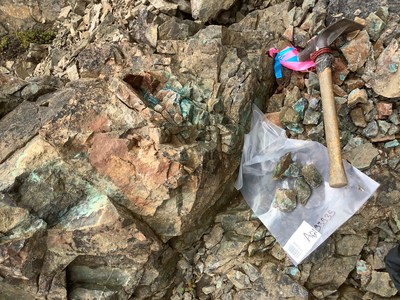 About the Big Red Property

Big Red is a 26,000-hectare district scale land package with both gold and copper targets being drilled for the first time. Big Red is located 45 kilometres southwest of Telegraph Creek along the Barrington Road, 70 kilometres north of Galore Creek, and 120 kilometres west of Red Chris in the Golden Triangle, of northwestern British Columbia, Canada . The project has both road access and an airstrip.

The Golden Triangle is a geological province of prodigious gold and copper mineralization and host to some of Canada’s most famous mines, including Premier, Red Chris , Snip, Brucejack and Eskay Creek . At Big Red, porphyry copper targets are peripheral to a distinct large magnetic-high feature and coincide with a radiometric potassium anomaly, copper, gold, silver and molybdenum geochemical anomalies, and a mapped Jurassic aged porphyry intrusion. Please see Libero’s flickr site for photographs.

Libero holds a collection of porphyry deposits throughout the Americas in prolific and stable jurisdictions. The portfolio includes both Big Red, a new porphyry copper discovery in the Golden Triangle, Canada , and the Mocoa porphyry copper-molybdenum deposit in Colombia . These assets are being advanced by a highly disciplined and seasoned professional team with successful track records of discovery, resource development, and permitting in the Americas.

The technical information contained in this news release has been reviewed and approved by Dr. Thomas Mumford P.Geo , President of Serac Exploration, who is a Qualified Person as defined under NI 43-101. 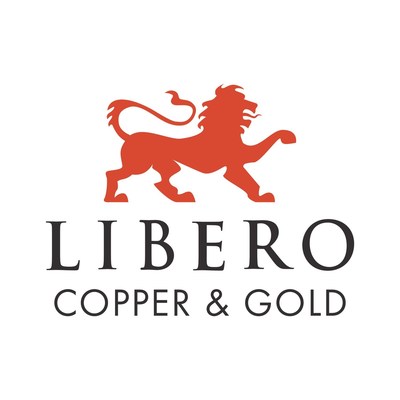