Libero Copper & Gold Corporation is pleased to announce high-grade copper assays from recent surface grab sampling at the Terry porphyry copper-gold target at the Big Red Project in the Golden Triangle. In addition, 3,500 metres of Reverse Circulation reconnaissance drilling were completed in 24 holes at the Ridge, ME18 and Terry targets with all assays from ME18 and Terry pending and expected in January. HIGHLIGHTS …

Libero Copper & Gold Corporation (TSXV: LBC) (OTCQB: LBCMF) (DE: 29H) is pleased to announce high-grade copper assays from recent surface grab sampling at the Terry porphyry copper-gold target at the Big Red Project in the Golden Triangle. In addition, 3,500 metres of Reverse Circulation (RC) reconnaissance drilling were completed in 24 holes at the Ridge, ME18 and Terry targets with all assays from ME18 and Terry pending and expected in January.

Terry has been mapped to date over an area of approximately 300 metres by 200 metres where generally east-west trending feldspar porphyry monzonitic dike swarms intruded into intermediate volcanics. Within the dikes and in contact zones, disseminated pyrite and chalcopyrite mineralization is associated with chlorite alteration.  A total of 585 metres in six RC holes (holes 22-27), were drilled at Terry, including holes 22 (24 metres) and 26 (7 metres) which were abandoned due to poor ground and re-drilled.  Chalcopyrite was logged in all holes and anomalous copper was detected by on site XRF analysis of RC chip samples over tens of metres in each hole (except the two abandoned holes in which anomalous copper was detected throughout).  Assays are pending and expected in January.  Terry is located at a lower elevation of 760 metres allowing a longer field season.  The 2021 follow up drill program utilizing core rigs is planned to commence in June. 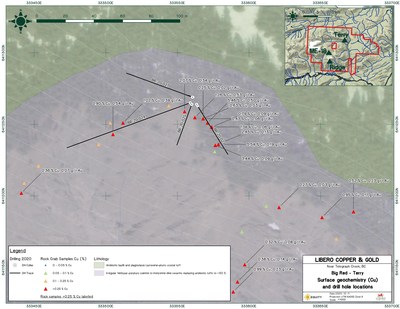 All assays have now been received for the drill program at Ridge which intercepted vein hosted sulphide mineralization with significant intercepts included in Table 2.  Holes 7, 8 and 10 were not completed due to poor ground conditions and redrilled.  In holes 4, 5, 6, 9, 12, 13 and 14 all sample assays contained less than one gram per tonne gold.

All sample assay results have been monitored through a quality control / quality assurance (QA/QC) program including the insertion of blind standards, coarse blanks and pulp reject duplicate samples. Monitoring of the QA/QC program has determined the results to be of acceptable quality. Drill core is logged and sawn on site and half drill-core samples are securely transported to ALS Global’s sample preparation facility in Whitehorse , Yukon.  Sample pulps are analyzed in North Vancouver, British Columbia for gold by fire assay using a 30-gram charge with atomic absorption spectroscopy (AAS) finish.  Samples which exceed 9 g/t gold trigger a 30-gram fire assay with gravimetric finish.  Copper and silver content are determined by four-acid digestion with ICP-AES finish.  ALS Global is an independent laboratory.  Libero is not aware of any drilling, sampling, recovery or other factors that could materially affect the accuracy or reliability of the data.

About the Big Red Property

Big Red is a 26,000 hectare district with both gold and copper targets being drilled for the first time.  Big Red is located 45 kilometres southwest of Telegraph Creek along the Barrington Road, 70 kilometres north of Galore Creek and 100 kilometres west of Red Chris in the Golden Triangle, of northwestern British Columbia , Canada.  The project has both road access and an airstrip.

The Golden Triangle is a geological province of prodigious gold and copper mineralisation and host to some of Canada’s most famous mines, including Premier, Red Chris , Snip, Brucejack and Eskay Creek . At Big Red porphyry gold-copper targets are peripheral to a distinct large magnetic-high feature and coincide with a radiometric potassium anomaly, copper, gold, silver and molybdenum geochemical anomalies and a mapped Jurassic aged porphyry intrusion.  Please see Libero’s flickr site for photographs.

Libero holds a collection of porphyry deposits throughout the Americas in prolific but stable jurisdictions.  The portfolio includes both Big Red, a new porphyry copper-gold discovery in the Golden Triangle, Canada , and the Mocoa porphyry copper-molybdenum deposit in Colombia.  These assets are being advanced by a highly disciplined and seasoned professional team with successful track records of discovery, resource development, and permitting in the Americas.

The technical information contained in this news release has been reviewed and approved by Libero’s Executive Vice President of Exploration, Leo Hathaway P.Geo ., who is a Qualified Person as defined under NI 43-101.