Sienna Resources Inc. (TSXV: SIE) (FSE: A1XCQ0) (OTC Pink: SNNAF) (the “Company”) Sienna Resources wishes to announce that management is evaluating Sienna’s Clayton Valley lithium project in Nevada. Sienna has had this property since 2016 and now that lithium prices and Clayton Valley projects in particular are showing strength, it makes sense to re-assess this project now.

Jason Gigliotti, President of Sienna Resources stated, “There has been a significant uptick in global sentiment for lithium and lithium companies. There has also been a tremendous focus on Nevada lithium in the recent months. It started with Elon Musk of Tesla Inc. recently stating he wants to develop lithium in Nevada to feed his gigafactories, and continued as Albemarle Corporation, who is a global leader in lithium, stated they also want to increase their lithium production in Clayton Valley. Lithium Americas Corp received a positive record of decision on its Thacker Pass Lithium Project January 15, 2021. On the junior front, Cypress Develop Corp, Noram Ventures Inc. and Spearmint Resources Inc have had a significant increase in shareholder interest as they all develop their lithium assets adjacent to Sienna. Sienna is currently active on multiple projects and with a massive boom in the Electric Vehicle market happening globally, the exponential need for battery metals such as lithium are seeing tremendous demand. Sienna expects to have a very active quarter.” 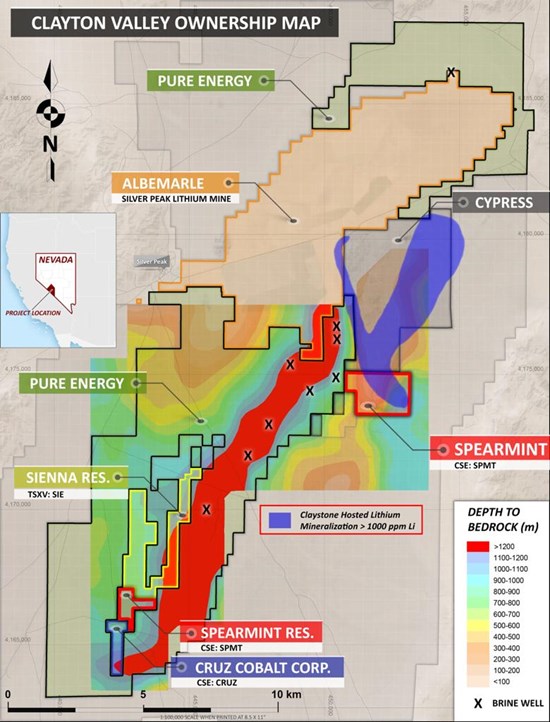 Sienna Resources is focused on exploring for and developing high-grade deposits in politically stable, environmentally responsible and ethical mining jurisdictions. Sienna is partnered with a New York Stock Exchange-listed mining company on three separate projects in Scandinavia including the past-producing Bleka and Vekselmyr orogenic gold projects in southern Norway which are both greenstone-hosted gold systems, the Kuusamo platinum group elements (PGE) project in Finland directly bordering the LK project being advanced by Palladium One Mining Inc., and the platinum-palladium-nickel Slattberg project in southern Sweden. In North America, Sienna’s projects include the Marathon North platinum-palladium property in Northern Ontario directly bordering Generation Mining Ltd.’s 7.1-million-ounce palladium-equivalent Marathon deposit. Sienna also has the Clayton Valley Deep basin lithium project in Clayton Valley, Nev., home to the only lithium brine basin in production in North America, in the direct vicinity of Albemarle Corp.’s Silver Peak deposit and Tesla Motors Inc.’s Gigafactory. Management cautions that past results or discoveries on properties in proximity to Sienna may not necessarily be indicative to the presence of mineralization on the company’s properties.

To view the source version of this press release, please visit https://www.newsfilecorp.com/release/72331