Forum Energy Metals Corp. is pleased to update shareholders with a review of the Company’s current exploration activities and exploration plans for the next six months on its copper, uranium, nickel, cobalt and palladium projects in Saskatchewan and Idaho .URANIUM PROJECTS Northwest Athabasca JV Forum has submitted a permit application for a 3,500 metre drill program in Q12022 and will be the Operator and sole …

Forum Energy Metals Corp. (TSXV: FMC) (OTCQB: FDCFF) (“Forum” or the “Company”) is pleased to update shareholders with a review of the Company’s current exploration activities and exploration plans for the next six months on its copper, uranium, nickel, cobalt and palladium projects in Saskatchewan and Idaho (Figure 1).

Forum has submitted a permit application for a 3,500 metre drill program in Q1/2022 and will be the Operator and sole funder of the program. With the $1.3 million proposed budget, Forum expects to increase its interest to 47% in the project with the dilution of the partners’ interests. The historical 1.5 million pound Maurice Bay uranium deposit* is a perched deposit in the sandstone based on 600,000 tonnes grading 0.6% U3O8 to a depth of 50 metres in the Western Athabasca Basin (Source: Saskatchewan Industry and Resources, Miscellaneous Report 2003-7).

Forum is focused on the discovery of a larger uranium deposit hosted at the unconformity between the sandstone and basement rocks and/or within the basement rocks. Drilling in 2012, 2013 and 2014 by Forum identified a number of shallow zones of uranium mineralization grading up to 5.7% uranium over 8.5 metres. With over twenty drill targets identified, it is Forum’s view that there is a uranium deposit on the property yet to be discovered.

Forum has recommended to Orano a resistivity survey to be conducted in December, 2021 to the north of drilling completed this past winter on Fir Island, followed by drilling of any anomalies detected from the survey. Timing of this program is dependent on Orano’s budget and permitting.

The gravity survey announced April 7, 2021 on the Wollaston project located 10km south of Cameco’s Rabbit Lake uranium mill and immediately east of the all-weather road to Orano’s McClean Lake uranium processing plant will be completed in Q4/2021. Forum has identified a number of drill targets from past drilling by Forum at the 100% owned Highrock and the 65% owned Costigan projects located 5 km south of Cameco’s Key Lake uranium mill. In the Western Athabasca Basin, Forum’s 75% owned Clearwater project, on trend from Fission’s Triple R and NexGen’s Arrow development projects has drill targets identified by previous Forum drilling. Rio Tinto Exploration Canada (“Rio Tinto”), 60% owner and operator of the Henday project (40% Forum) in the Eastern Athabasca Basin, does not plan any programs for 2022.

Rio Tinto has completed drilling a further nine holes on the Rafuse target during the summer exploration program, following up on the nine holes drilled on the Rafuse target by Rio Tinto during the winter drill program. Rio Tinto expects results to be available by mid-October. A major focus of Rio Tinto’s summer exploration program was regional mapping, sampling and prospecting of the full extent of the 52 kilometre long sedimentary basin hosting these copper deposits. Prospecting in 2020 discovered a 3.8% copper boulder eighteen kilometres to the south of the current drill area.

Forum is currently on its seventh drillhole of its 3,000 metre drill program on three targets identified over the Love Lake mafic/ultramafic complex. Samples from the first three holes have been delivered to the Saskatchewan Research Council for analysis. A minimum of three further holes are planned on the property.

A prospecting, mapping and sampling program has been delayed by forest fires in Idaho and is expected to commence in late September/early October. This will be the first program conducted on the property since Noranda, previous operator of the nearby Blackbird cobalt mine, completed an exploration program that identified anomalous cobalt in stream sediment samples on the property in 1982. Jervois Global Limited reports that development activities at the Idaho Cobalt Operation on trend from Quartz Gulch are on track for the delivery of first ore to the operational mill in July, 2022 (Source: Jervois Global Limited Interim Financial Report for the half-year ended 30 June 2021). 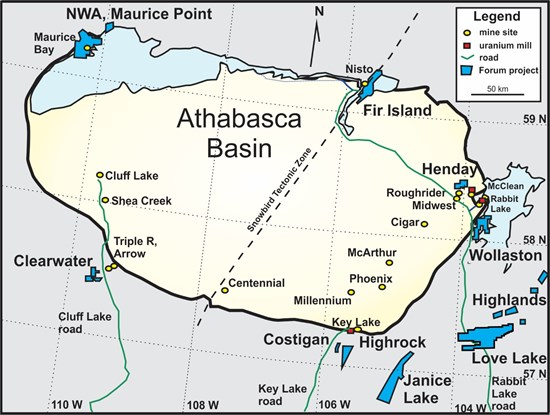 Rick Mazur, P.Geo., Forum’s President & CEO and Qualified Person under National Instrument 43-101, has reviewed and approved the contents of this news release.

Forum Energy Metals Corp. (TSXV: FMC) has three 100% owned energy metal projects being drilled in 2021 by the Company and its major mining company partners Rio Tinto and Orano for copper/silver, uranium and nickel/copper/platinum/palladium in Saskatchewan, Canada’s Number One Rated mining province for exploration and development. In addition, Forum has a portfolio of seven drill ready uranium projects and a strategic land position in the Idaho Cobalt Belt. For further information: www.forumenergymetals.com

Forward-looking information is subject to known and unknown risks, uncertainties and other factors that may cause Forum’s actual results, level of activity, performance or achievements to be materially different from those expressed or implied by such forward-looking information. Such factors include but are not limited to: uncertainties related to the historical data, the work expenditure commitments; the ability to raise sufficient capital to fund future exploration or development programs; changes in economic conditions or financial markets; changes commodity prices, litigation, legislative, environmental and other judicial, regulatory, political and competitive developments; technological or operational difficulties or an inability to obtain permits required in connection with maintaining or advancing its exploration projects.

To view the source version of this press release, please visit https://www.newsfilecorp.com/release/95975