Global Atomic Corporation announced that the Government of the Republic of Niger has issued an Environmental Compliance Certificate for the Dasa Uranium Project.  The Company has also received  three-year permit extensions  for each of its six Exploration properties in Niger all of which have seen substantial exploration programs in the past. President and CEO of Global Atomic, Stephen G. Roman said, ” The …

Global Atomic Corporation (“Global Atomic” or the “Company”), (TSX: GLO) (OTCQX: GLATF) (FRANKFURT: G12) announced that the Government of the Republic of Niger has issued an Environmental Compliance Certificate for the Dasa Uranium Project.  The Company has also received  three-year permit extensions  for each of its six Exploration properties in Niger all of which have seen substantial exploration programs in the past.

President and CEO of Global Atomic, Stephen G. Roman said, ” The issuance of the Environmental Compliance Certificate along with the Dasa Mining Permit issued in December 2020 , provide Global Atomic with the necessary Government approvals to advance the development of the Dasa Project towards commercial production.  We continue to work towards the completion of the Feasibility Study and have begun discussions with utilities with regard to off-take agreements and  financial institutions with regard to project financing.  We continue to target Q1 of 2022 to begin earthworks to build the mine.”

With the discovery of the Dasa uranium deposit, the Company’s focus in recent years has been on Dasa including the development of a uranium processing facility to support commercial production.  Within the AE3 Exploration Permit there remains significant potential to extend the known resources of the high-grade Dasa deposit along both strike and at depth.

There also exists a geological prospect within AE3 known as Dajy where historical drilling encountered prospective widths and grades within the Tarat stratigraphic unit, the same geological structure that hosts Orano Mining’s Somaïr mine. Further potential exists along strike of the Isakanan prospect on the adjacent AE4 Exploration Permit.   Historical drilling on the Isakanan prospect outlined a formation that will be further drilled and tested for in-situ recovery (ISR) potential.

The Tin Negoran Exploration Permits have been the target of over 22,000 metres of drilling by Global Atomic.  Areas of extensive outcropping and near-surface mineralization will be further tested to determine the potential for open pit mining.  The Tin Negoran Exploration Permits are within 100 kilometres of the AE3 concession, which would enable Global Atomic to use the planned Dasa mill to potentially process Tin Negouran feedstock. All six Exploration Permit Areas lie within the Tim Mersoï Basin which has produced uranium for the Republic of Niger for the last 50 years.

In separate news, Global Atomic is pleased to announce it won the 24 th position on the 2021 OTCQX ® Best 50, a ranking of top performing companies traded on the OTCQX Best Market in 2020.   The OTCQX Best 50 is an annual ranking of the top 50 U.S. and international companies traded on the OTCQX market  based on an equal weighting of one-year total return and average daily dollar volume growth in the previous calendar year.

The Company’s Uranium Division includes four deposits with the flagship project being the large, high-grade Dasa Project, discovered in 2010 by Global Atomic geologists through grassroots field exploration. With the issuance of the Dasa Mining Permit, final design in support of the Company’s Feasibility Study is on-going.

Global Atomics’ Base Metals Division holds a 49% interest in the Befesa Silvermet Turkey, S.L. (“BST”) Joint Venture, which operates a new, state of the art processing plant, located in Iskenderun, Turkey . The plant recovers zinc from Electric Arc Furnace Dust (“EAFD”) to produce a high-grade zinc concentrate which is sold to smelters around the world. The Company’s joint venture partner, Befesa Zinc S.A.U. (“Befesa”) listed on the Frankfurt exchange under ‘BFSA’, holds a 51% interest in, and is the operator, of the BST Joint Venture. Befesa is a market leader in EAFD recycling, with approximately 50% of the European EAFD market and facilities located throughout Europe and Asia .

The Toronto Stock Exchange has not reviewed and does not accept responsibility for the adequacy and accuracy of this news release. 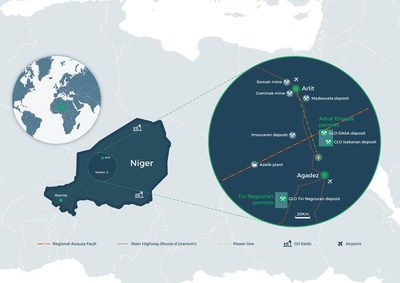