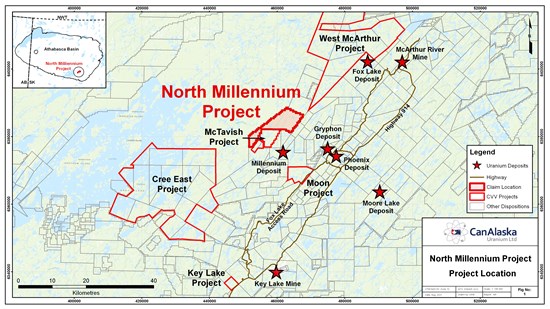 The uranium mineralization at Cameco’s Millennium deposit is hosted within the north-south trending Host Assemblage basement metasediments where the conductor corridor changes orientation from north-south to northeast-southwest. The Host Assemblage metasediments are hanging-wall to the “Mother Fault”, a 10 metre-wide, strongly altered, north-south trending fault zone with a reverse sense of displacement (Figure 2). Previously documented genetic models of the Millennium uranium deposit have interpreted the Mother Fault to be the main conduit for ore-bearing fluids entering the basement rocks to form the deposit. Based on the regional magnetic data (Figure 2), a sharp break in the magnetic grain and a disruption of the conductors on the North Millennium project are observed immediately north of Cameco’s Millennium deposit. These breaks create a strong north-south lineament which is interpreted to be the continuation of the Mother Fault onto the North Millennium project (Priority Area 1). This lineament pattern is similar to that of the Millennium deposit where a northeast-southwest trending conductive package intersects an interpreted north-south fault zone. Historical exploration work on the North Millennium project is limited to regional scale airborne and ground-based electromagnetic surveys and no drillholes have been completed on the project to date. 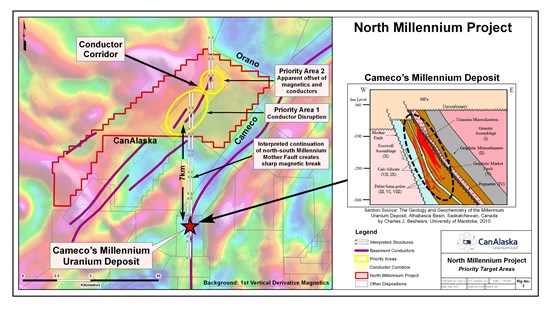 CanAlaska CEO, Cory Belyk, comments, “Recognition of evidence that suggests the presence of the Millennium deposit’s controlling Mother Fault in association with more than five kilometres of untested conductor corridor on the North Millennium project is another example of the great work our geologists are doing to generate new projects and discovery opportunities for our shareholders. Athabasca Basin projects with previously unrecognized discovery potential, such as North Millennium, will undoubtedly attract outside investment in an ever-improving uranium market. We look forward to working with new joint venture partners to move this project toward discovery.”

The Company is currently drilling on its West McArthur Joint Venture Project in the 42 Zone discovery area, a joint venture with Cameco Corporation.

To view the source version of this press release, please visit https://www.newsfilecorp.com/release/94486