Investing News Network
Feasibility Study Confirms PEA Project Capital and Lowest-Quartile Operating Costs All monetary amounts are in U.S. dollars, unless otherwise indicated.  Global Atomic Corporation announced today the results of the Phase 1 Dasa Project Feasibility Study for the Company's Dasa Uranium Project in the Republic of Niger. The Study confirms that the Project is economically compelling, even at a price of $35 per pound U ...

All monetary amounts are in U.S. dollars, unless otherwise indicated.

Global Atomic Corporation ("Global Atomic" or the "Company"), (TSX: GLO) (OTCQX: GLATF) (FRANKFURT: G12) announced today the results of the Phase 1 Dasa Project Feasibility Study (the "Study") for the Company's Dasa Uranium Project (the "Project") in the Republic of Niger.

The Study confirms that the Project is economically compelling, even at a price of $35 per pound U 3 O 8 .   Based on the Study, the strong uranium market and anticipated uranium supply deficits, the Board of Directors have made a production decision to proceed with the Dasa Project.   The Study is focused solely on Phase 1, primarily comprised of the Flank Zone, and represents the initial 12 years of the Project and less than 20% of the Dasa mineralization, which has been delineated through 160,000 metres of drilling since 2010.  The Study is an update from the Preliminary Economic Assessment (the "PEA") filed in May 2020.

The Dasa Project is located in Niger's Tim Mersoï Basin, which has successfully produced uranium for export to France , the United States and other countries for 50 years, contributing to Niger's status as the 5 th largest exporter of U 3 O 8 for use in nuclear power plants.

Stephen G. Roman , President and CEO commented, " We are pleased to report our Maiden Reserve and confirm robust economics for the Dasa Project.  We had already decided to move ahead with construction contracts to break ground in January 2022 and begin underground development in April 2022.  We are now ready to negotiate project financing, advance offtake negotiations with utilities, complete detailed engineering and complete the bidding process for an EPCM contract to build and commission our processing plant by the end of 2024."

"The mining industry has seen significant pandemic-induced increases in input costs since the PEA was completed in 2020.  We are very pleased to have duplicated our previous PEA project capital costs and thank METC Engineering, Bara Consulting, Insight R&D and Process Research Ortech for their excellent work in this regard.  In the event pandemic related cost increases return to historical levels, project economics will be further enhanced."

Feasibility Study Overview and Comparison to the Preliminary Economic Assessment

The objective of the Study was to confirm the findings of the May 2020 PEA, apply detailed design and current costing to the Project, and reduce the risks of the Project thus decreasing the previously applied 20% contingency rates.   The Study proves the viability of the Project and will serve as the basis for the Company to negotiate project financing, advance off-take agreement discussions with utilities, finalize detailed engineering and select an EPCM contractor to build the processing plant.

Table 1 below compares key metrics from the PEA to the Study.

With the issuance of the Dasa Mining Permit and an Environmental Compliance Certificate by the Republic of Niger , the Dasa Project is fully permitted for commercial production. Excavation of the Box-Cut and collaring of the mine Portal are planned for early 2022.

The Study was completed to Class 3 Standards of the Association for the Advancement of Cost Engineering ("AACE") and has an accuracy of +/- 9.6%.

The economic analysis for the Study was done with a discounted cash flow ("DCF") model based on a uranium price of $35 per pound U 3 O 8 . The discount rate used for the base-case analysis is 8% ("NPV 8 "). Sensitivity analysis was applied at intervals from $35 per pound to $60 per pound, as shown in Table 2 below.

The DCF includes the current tax regime and royalty requirements in Niger.  Net present value ("NPV") figures are calculated using a range of discount rates as shown in Table 3.

The Study is focused solely on Phase 1, which represents the initial 12 years of the Project.   The longitudinal section of the Dasa Deposit (see Figure 1 below) highlights the Flank Zone area being mined in Phase 1 (within the solid red-lined square), representing less than 20% of the Dasa mineralization.   After Phase 1, the Company plans to continue with the underground mining of Phase 2 and after several decades consider an open-pit operation to mine the lower-grade surface mineralization of Phase 3.

The Mineral Resource Estimate ("MRE") prepared by CSA Global with an effective date of June 1, 2019 is used as the basis for the Study. Economic analysis, including a cut-off grade of 2,074 ppm U 3 O 8 based on a U 3 O 8 price of $35 per pound, was applied to the Indicated Resources of the MRE, comprising primarily the Flank Zone. A resultant Phase 1 Mine Plan was developed for the Dasa deposit to yield the following reserves:

The Project will use operationally proven uranium processing techniques, comprised of dry SAG grinding and classification; pug-leaching and curing; uranium extraction circuit (re-pulping and solid/liquid separation); uranium purification and precipitation circuit; drying and packaging. Based on extensive metallurgical work and a six-month pilot plant study, a steady-state recovery rate of 94.15% is estimated over the12-year mine plan of the Project, which is expected to produce 45.4 million pounds of U 3 O 8 as Yellowcake.

The cash cost of $18.91 per pound places Dasa in the lowest quartile of uranium companies.

In April 2021 , Global Atomic engaged London -based HCF International Advisers ("HCF") to assist in project financing.  HCF specializes in financing mining projects in Africa.  With HCF, the Company has short-listed a group of banks and financial institutions  who are interested in funding the Project.   With the application of cash flow from the Company's Turkish Zinc JV and the potential to Direct Ship Ore ("DSO") to Orano Mining's Somaïr processing facility in Niger to generate revenue during the development stages of the Dasa mine, the Company plans to minimize the amount of equity required for project financing.   With the completion of the Study, the Company expects to accelerate these financing discussions and conclude a financing agreement in the first half of 2022.

In 2021, the Company has been actively engaged in discussions with Orano Mining regarding the potential of a DSO arrangement with their Somaïr processing plant, situated approximately 100 kilometers north of the Dasa Project.   Orano Mining processed samples of Dasa ore through the Somaïr plant in a series of successful metallurgical tests earlier in 2021. The Memorandum of Understanding signed with Orano in 2017 included the shipment and sale of 500,000 tonnes of ore to Somaïr within the initial five-year period of mining at Dasa. By the end of 2024, Global Atomic intends to commission its own plant to process ore from Dasa. Discussions have since been expanded to include the option of toll milling, combining certain logistics and shipping Yellowcake to Global Atomic customers.

One of the objectives of the 15,000-meter drilling program that began in September 2021 , is to explore extensions of the Flank Zone located close to surface which could result in extending the mining of shallow ore, thereby lowering development and operating costs for the Project. 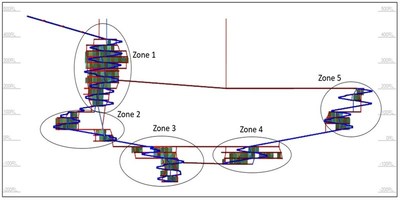 The areas referred to as Zones 3, 4 and 5 had sufficient drill density to be classified as Indicated Resources, thereby enabling them to be converted into Probable Reserves. As further drilling upgrades the Inferred Resources around Zones 1 and 2, Global Atomic expects mining would continue in these areas, which would require less development, thereby reducing costs associated with mining Zones 3, 4 and 5 until mining progressed to these areas in the natural course of mine development over succeeding years. Figure 3 shows the distribution of Indicated and Inferred Resources throughout the Dasa deposit. 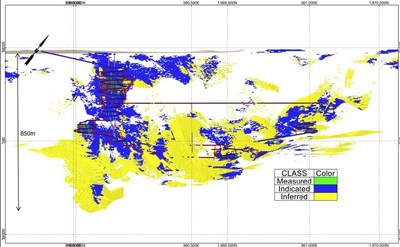 Presently, the Company is infill drilling an area referred to as Zone 2 East, which is above Zone 3. The drilling density in this area was only sufficient to classify it as Inferred Resources. A previously drilled hole adjacent to the current drilling is ASDH 476, which contained a 100 meter section averaging 3,497 ppm, including a higher grade portion with a width of 50 meters and a grade of 5,972 ppm.

A NI 43-101 compliant technical report related to the Feasibility Study will be filed on SEDAR and posted to the Company website ( www.globalatomiccorp.com ) by December 30, 2021 .

The Company's Uranium Division includes four deposits with the flagship project being the large, high grade Dasa Project, discovered in 2010 by Global Atomic geologists through grassroots field exploration. With the issuance of the Dasa Mining Permit and an Environmental Compliance Certificate by the Republic of Niger , the Dasa Project is fully permitted for commercial production.

Global Atomics' Base Metals Division holds a 49% interest in the Befesa Silvermet Turkey, S.L. ("BST") Joint Venture, which operates a modern zinc production plant, located in Iskenderun, Turkey . The plant recovers zinc from Electric Arc Furnace Dust ("EAFD") to produce a high-grade zinc oxide concentrate which is sold to zinc smelters around the world. The Company's joint venture partner, Befesa Zinc S.A.U. ("Befesa") listed on the Frankfurt exchange under 'BFSA', holds a 51% interest in and is the operator of the BST Joint Venture. Befesa is a market leader in EAFD recycling, with approximately 50% of the European EAFD market and facilities located throughout Europe , Asia and the United States of America .

Fission Uranium Corp. (" Fission " or " the Company ") is pleased to announce the Saskatchewan Ministry of Environment ("MOE") has formally accepted the recently submitted Project Description ("Technical Proposal") for the PLS uranium project (the "Project") in Saskatchewan, Canada . With this acceptance, Fission has now commenced the Environmental Assessment ("EA") as per the requirements of The Saskatchewan Environmental Assessment Act.  Fission has requested approval under Section 15 of the Act and is looking for a determination from the Saskatchewan Minister of Environment that the Project is a Development. The result of this is that Fission will be required to produce an environmental impact assessment (EIA) for the Project.  In support of this, Fission has also submitted a draft Terms of Reference that will be finalized by the province in consultation with other stakeholders. The final Terms of Reference will guide Fission's EA development.

GTI Resources Ltd (GTI or the Company) is pleased to advise that, in conjunction with its ESG monitoring and reporting initiative, it has committed to become operationally carbon neutral.

/NOT FOR DISSEMINATION, DISTRIBUTION, RELEASE, OR PUBLICATION, DIRECTLY OR INDIRECTLY, IN OR INTO THE UNITED STATES OR FOR DISTRIBUTION TO U.S. NEWSWIRE SERVICES/

Toro Energy Limited (ASX:TOE) (“the Company” or “Toro”) is pleased to advise the Federal government’s Minister for the Environment and Energy, the Hon Josh Frydenberg, has granted environmental approval, subject to implementation conditions, for the Extension to the Wiluna Uranium Project (EPBC 2014/7138) in Western Australia.

The Minister’s approval was received by Toro on 7 July 2017 and is attached to this announcement (Annexure 1).

Benton Advised that Clean Air Metals Announces a PEA of the Current and Escape PGE-Cu-Ni Deposits of the Thunder Bay North Project, with Post-Tax NPV of C$378m, IRR 29.8%

Graycliff Exploration to Webcast Live at VirtualInvestorConferences.com on December 9th