Turbine 5 to produce 162 MW of renewable hydropower, providing the Kamoa-Kakula Copper Complex and associated smelter with sustainable electricity for Phase 3 and future expansions

The extension of this financing agreement builds on the framework agreed in the memorandum of understanding signed with SNEL and announced in April 2021.

An estimated 162 megawatts (MW) of hydropower is expected to be generated by upgrading Inga II’s turbine 5, which when combined with the 78 MW of hydropower from the Mwadingusha facility, will give Kamoa-Kakula priority access to a combined 240 MW of clean, renewable electricity.

The financing agreement was originally entered into in connection with the joint rehabilitation of the Mwadingusha hydropower plant under the first public-private partnership with SNEL, where five of six turbines now have been completed. Under this financial arrangement, rehabilitation and upgrade activities are financed by Kamoa Copper’s holding company, Kamoa Holding, by way of a loan to SNEL, which will be repaid through a deduction to monthly power bills incurred over the life of the loan.

Kamoa Copper and SNEL, together with the expertise of Stucky SA of Lausanne, Switzerland, and Voith Hydro of Heidenheim, Germany, respectively the EPCM and the contractor, have commenced a technical assessment to define the scope of work and associated costs estimate. The work also will include upgrading of the terminal equipment on the Inga-Kolwezi transmission line to increase its transfer capacity by a minimum of 200 MW.

Mr. Friedland commented: “The Kamoa Copper management team continues to execute on our strategic plan to systematically expand Kamoa-Kakula into one of the world’s largest and greenest copper producers. The timely refurbishment of turbine 5 at the Inga II hydropower complex is instrumental in ensuring we meet the aggressive expansion goals we’ve set out to accomplish in the next few years.”

SNEL CEO, Jean-Bosco Kayombo Kayan, added: “SNEL and Ivanhoe Mines Energy are confident that the Inga II project will enjoy the same success as our joint rehabilitation of the Mwadingusha hydroelectric power station. We all are keen on fast-tracking the return to service of unit 5 at Inga II to provide access to electricity to more people in the Democratic Republic of Congo, and to meet the power demands of the world-scale Kamoa-Kakula Copper Mine.”

The Inga II hydropower plant is located in the southwest of the DRC, on the Congo River. The Congo River is the deepest river in the world and the second longest after the Nile, with a flow rate second only to the Amazon River. Measured along with the Lualaba, the main tributary, the Congo River has a total length of 4,370 kilometres. It is the only major river to cross the equator twice. The Congo River is unique in that it has large rapids and waterfalls very close to the mouth, while most rivers have these features upstream. The rapids and waterfalls give the Congo River huge hydropower potential. The Congo Basin covers an estimated total area of 3.7 million square kilometres, approximately 13% of the entire African landmass.

Originally equipped between 1977 and 1982, Inga II has been running for approximately 40 years. Four of the eight turbines at Inga II have been refurbished. Turbine 5 is one of the remaining four turbines that are awaiting an upgrade. An estimated output of 162 MW is expected to be unlocked by upgrading Inga II’s turbine 5, part of which will be used to meet future power requirements of the Kamoa-Kakula Mine. The surplus power produced from the upgraded turbine will be distributed on the national power grid to increase access to electricity for the citizens of the Democratic Republic of Congo.

SNEL and Ivanhoe Mines Energy DRC have appointed Voith Hydro, a leading engineering group, as the contractor to lead the consortium of equipment manufacturers for the turbine upgrade. For more than 80 years, Voith has successfully constructed and modernized hydropower plants on the African continent, and approximately 25% of currently installed turbine capacity in Africa has been supplied by Voith. The company also has successfully rehabilitated two turbine generators at the adjoining Inga I hydropower plant, a project that was financed by the World Bank.

The Inga II dam wall and penstocks, with turbine 5 indicated by the red arrow. 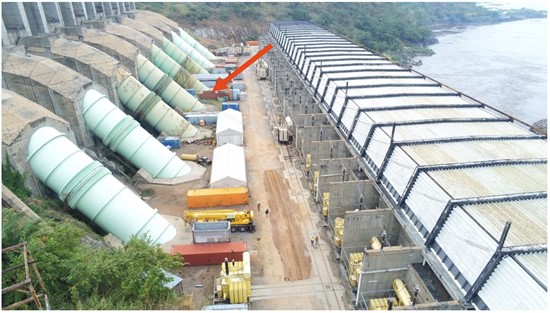 To view an enhanced version of this graphic, please visit:
https://orders.newsfilecorp.com/files/3396/93198_ivanhoefigure1.jpg

Aerial view of the Inga I (rear) and Inga II (front) hydropower plants on the Congo River. The penstock funneling water to turbine 5 at Inga II is circled in red. 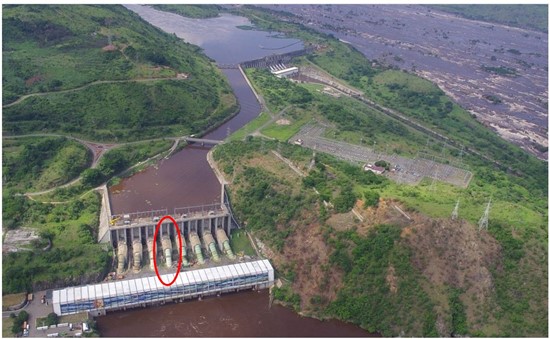 To view an enhanced version of this graphic, please visit:
https://orders.newsfilecorp.com/files/3396/93198_ivanhoefigure2.jpg

The map below shows the Inga and Mwadingusha hydropower complexes, the 1,700-kilometre Inga-Kolwezi high-voltage direct current power line, the Kamoa-Kakula Project, the new 220-kilovolt power line connecting Kamoa-Kakula to the national grid at Kolwezi, and the Benguela railway connecting the DRC to the Angolan port of Lobito. 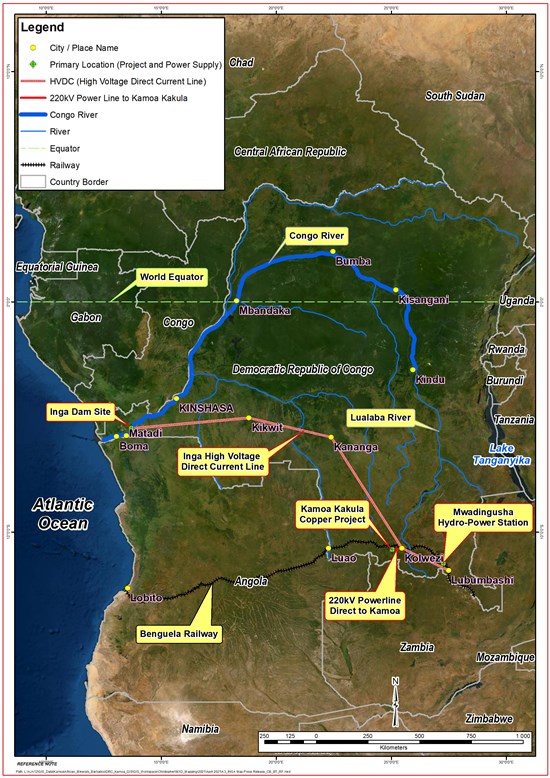 Kamoa-Kakula began producing copper in May 2021 and, through phased expansions, is positioned to become one of the world’s largest copper producers. Kamoa-Kakula and Kipushi will be powered by clean, renewable hydro-generated electricity and will be among the world’s lowest greenhouse gas emitters per unit of metal produced. Ivanhoe also is exploring for new copper discoveries on its Western Foreland exploration licences in the DRC, near the Kamoa-Kakula Project.

Forward-looking statements (to be updated)

Such statements include without limitation, the timing and results of: (i) statements regarding an estimated 162 megawatts (MW) of hydropower is expected to be generated by upgrading Inga II’s turbine 5, which when combined with the 78 MW of hydropower from the Mwadingusha facility, will give Kamoa-Kakula priority access to a combined 240 MW of clean, renewable electricity; and (ii) statements regarding Kamoa-Kakula and Kipushi will be powered by clean, renewable hydro-generated electricity and will be among the world’s lowest greenhouse gas emitters per unit of metal produced.

The company’s actual results could differ materially from those anticipated in these forward-looking statements as a result of the factors set forth below in the “Risk Factors” section in the company’s 2021 Q2 MD&A and its current annual information form.

To view the source version of this press release, please visit https://www.newsfilecorp.com/release/93198