Conquest Resources Limited (TSXV: CQR) ("Conquest" or the "Company") has collared its first hole in a program that will test over thirty geophysical anomalies over the next several months. Camp construction was completed on schedule and on budget. Final VTEM Max processed data was received in May and modeled for drill targeting. Drill pads have been constructed for the first series of holes and permits received from the MLAS office of the Ontario Government.

The VTEM targets vary in size and conductivity with some having coincident magnetic associations. Most targets are covered with a veneer of Huronian sediments and or Nipissing diabase sills (fig 1). Thickness of cover rocks is variable but generally expected to be between 100 and 300m. Deposit types known to exist in this portion of the 100% Conquest controlled land package are magmatic Cu-Ni-PGE, Volcanogenic Massive Sulfide and gold in Banded Iron Formation. 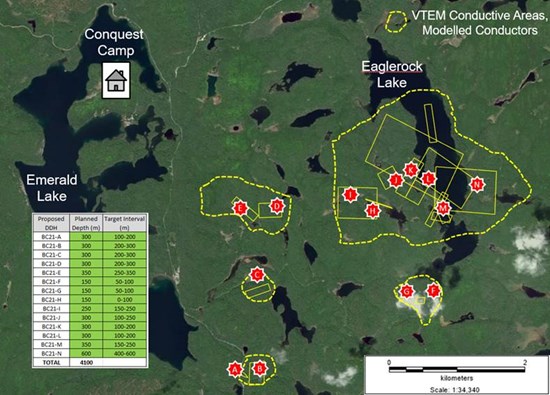 The company has compiled historic exploration data collected on this part of the Temagami Greenstone Belt. In addition to the EM components, the recent VTEM survey provided high resolution total field magnetic data for the surveyed area. Exemplified by the Eaglerock Lake greenstone window, fig 2, the color contoured magnetic field derivative product coupled with coincident VTEM conductor positions, clearly reveals the locations of possible subcroppings of the greenstone belt conductive and/or magnetic units. Additionally, in the Eaglerock Lake area historic exploration and drilling has resulted in the discovery of a Po, Py and Cpy bearing series of lenses identified as a VMS related exhalate horizon. Historic drilling verifies the presence of anomalous Cu and Zn and alteration consistent with VMS style deposits resulting in an environment permissive for an economic VMS Cu-Zn discovery. The company plans to carry out an aggressive drill program in the assessment of these priority target areas at Eaglerock and to the SW in search of additional greenstone targets. 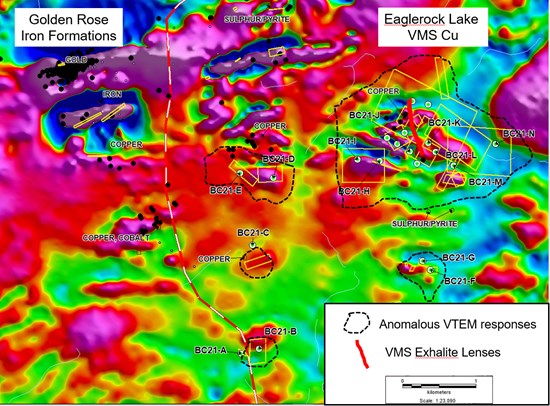 The Company has also received final infill ground gravity processed by Clearview Geophysics on the northern portion. Kevin Stevens, Chief Geophysicist commented "We are very pleased with the results of our 190 site ground gravity survey in Belfast Township. Our IOCG model for the Temagami Region is driven by the identification of a crustal scale structural regime in the corridor that is coincident with a geochemically anomalous region, in central Belfast Township, and is also associated with the eastern extents of the Temagami Geophysical Anomaly. Our airborne and ground programs have successfully outlined three areas of anomalous gravity responses. Several copper-gold-hematite occurrences associated with large quartz veins have been historically discovered in the area as well. We are greatly anticipating our first drill holes into these structurally controlled dense and magnetic sources all of which appear to sub-crop within the top 600m of surface". 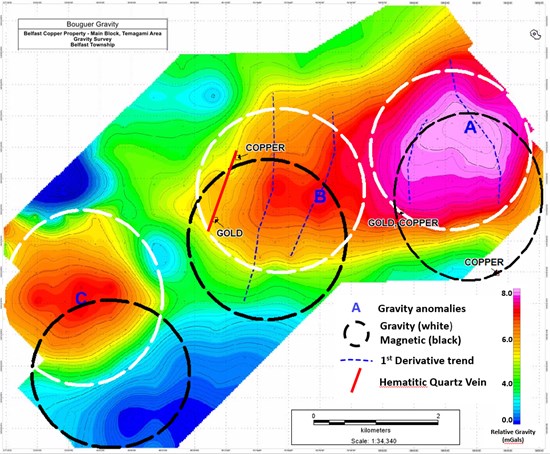 Figure 3 shows an image of the color contoured Bouguer gravity responses from the 190 site ground gravity survey in Belfast Township. Nominal station spacing is 300-350m over an area of 5x4km. A west to east increasing gravity trend is offset on the west side by a north south trending gravity and magnetic low, interpreted to be a major structure. Three distinct circular gravity response areas exceeding 7 mGals each are identified, with the largest amplitude feature on the east part of the grid, A-C. Coincident with, but slightly offset to the south of the gravity centers, are the interpreted magnetic anomalies identified by the VTEM airborne magnetic survey. Mapping and interpreting geology and basement topography, along with gravity highs +/- associated offset magnetic responses, are important vectors to IOCG permissive regions at the regional scale as shown in the Gawlor Craton, Australia. North to south 1st derivative gravity trends are revealed and suggest further structural controls on the emplacement of these 1.5-2km diameter, individually dense and magnetic bodies. Mineral occurrences of chiefly copper and gold are located within these anomalous areas and may be associated with the deeper magnetic and dense IOCG type geologic systems.

Conquest's first 3500m of drilling will commence on priority VMS Cu targets. Results from the program will be reported as they become available.

McGovern Hurley LLP Chartered Professional Accountants were re-appointed as the Company's Auditors for the current year and the directors were authorized to fix the remuneration of the Auditors.

By a single ballot in accordance with the proxies submitted, the Company's Stock Option Plan was ratified.

The technical content of this News Release has been reviewed and approved by Joerg Kleinboeck, P.Geo., a qualified person as defined in NI 43-101.

Conquest holds a 100% interest in the Belfast - Teck Mag Project,located in the Temagami Mining Camp at Emerald Lake, approximately 65 kilometers northeast of Sudbury, Ontario, which hosts the former Golden Rose Gold Mine and is underlain by highly prospective Abitibi greenstone geology along a strike length of seventeen (17) kilometers.

Conquest now controls over 300 sq km of underexplored territory, including the past producing Golden Rose Mine at Emerald Lake, in the Temagami Mining Camp.

Forward-looking statements. This news release may include certain "forward-looking statements". All statements other than statements of historical fact, included in this release, including, without limitation, statements regarding the completion of the Acquisition and the Consolidation, the release of escrowed funds, future cash on hand, potential mineralization, resources and reserves, exploration results, and future plans and objectives of Conquest, are forward-looking statements that involve various risks and uncertainties. There can be no assurance that such statements will prove to be accurate and actual results and future events could differ materially from those anticipated in such statements. Important factors that could cause actual results to differ materially from Conquest's expectations are exploration risks detailed herein and from time to time in the filings made by Conquest with securities regulators. Neither the TSXV nor its Regulation Services Provider (as defined in the policies of TSXV) accepts responsibility for the adequacy or accuracy of this release.

To view the source version of this press release, please visit https://www.newsfilecorp.com/release/87040

Alvo Minerals Limited (ASX: ALV) (“Alvo” or the Company) is pleased to provide its Quarterly Activities Report for the period ending 30 June 2022. All dollar amounts are A$ unless stated otherwise. Alvo is exploring its Palma VMS Project in Brazil (“Palma Project” or the “Project), a project that has significant copper and zinc potential in brownfields prospects within a district scale exploration package of highly prospective tenure.

Ero Copper Corp. (TSX: ERO, NYSE: ERO) ("Ero" or the "Company") is pleased to announce the publication of its 2021 Sustainability Report (the "Report"). The Report provides an update on the Company's strategy, practices, performance and management approach to key environmental, social and governance ("ESG") topics. The Report is available on Ero's website ( www.erocopper.com ).

"This Report showcases the excellent work being performed on sustainability across our organization as well as our commitment to clear and transparent disclosure for all of our stakeholders," said David Strang, Ero's Chief Executive Officer. "This is our third annual sustainability report, and I'm pleased that each year we have meaningfully enhanced our disclosure. Of note, this year we have provided broader quantitative data on our health and safety performance, greenhouse gas ("GHG") emissions and intensity as well as the economic value generated and distributed in the regions we operate. In particular I'd like to highlight our favorable position as one of the lowest GHG intensive copper and gold producers in the world driven by Brazil's leadership in renewable energy combined with the high-grade nature of our mines. Although we are proud of our relative positioning, we believe that we can continue to improve our GHG emissions intensity and are committed to providing GHG emissions targets in our 2022 Sustainability Report.

Proceeds from the sale of the Shares will be used for general corporate purposes (working capital) and to maintain a strong treasury balance for the balance of 2022.

Comet Resources Limited (Comet or the Company) (ASX:CRL), is pleased provide the Quarterly Activities Report and Appendix 5B for the quarter ending 30 June 2022 (the Quarter).

Cyprium Metals Limited (ASX: CYM) (“Cyprium” or the “Company”) is pleased to provide the following overview of the Company’s activities for the June 2022 quarter.

How to Use Gold Investments as a Hedge