FPX Nickel Corp. (TSXV: FPX) (“FPX” or the “Company“) is pleased to provide an overview of planned exploration drilling programs starting in June at the Company’s Decar Nickel District (“Decar“) in central British Columbia.  This will mark the most active campaign at Decar since 2012, with a dual focus on resource confirmation and expansion at the Baptiste Deposit (“Baptiste“) plus an initial drill campaign at the Van Target, located 6 kilometres north of Baptiste.

“Having demonstrated the potential for the development of a low-cost, large-scale operation at Baptiste with last year’s Preliminary Economic Assessment (“PEA“), we now look forward to assessing the potential for a new discovery with a maiden drilling program at Van this summer,” commented Martin Turenne, FPX’s President and CEO. “Previous work, after logging activity exposed a number of outcrops, confirmed that the Van Target has outcropping bedrock with nickel grades very comparable to those initially encountered at Baptiste.  Van is hosted in the same ophiolite host rocks and with similar apparent structural controls as Baptiste, making it a very promising drill-ready target.”

An initial nine-hole, 3,000-metre drill program is planned at the Van Target, which is located 6 kilometres north of Baptiste at similar elevations, and accessible via logging roads.  The Van Target’s bedrock samples occur in a previously unexplored area due to ground cover which was more recently exposed by logging activity.

Davis Tube magnetically-recovered (“DTR“) nickel analysis of 54 bedrock samples, taken at intervals of 50 to 350 meters at the Van Target, has defined an area of approximately 2.9 square kilometers (see Figure 1).  This compares very favorably with the area defined by outcrop sampling and subsequent drilling at Baptiste, which is3.2 kilometres along strike with widths of 150 to 1,080 metres.

Table 1 provides a summary of the DTR nickel assays of 54 bedrock samples from the Van Target (Figure 2).  As elsewhere in the Decar District, the mineralization is coincident with sheared peridotite while numerous samples from the massive peridotite are very largely unmineralized or low grade.  These results are notable for the high proportion of samples grading over 0.06% DTR nickel, the cut-off grade employed in the 2020 National Instrument (“NI“) 43-101 resource estimate for the Baptiste deposit.  The 10 samples over 0.14% DTR nickel are some of the highest-grade surface samples ever taken at the Decar District. 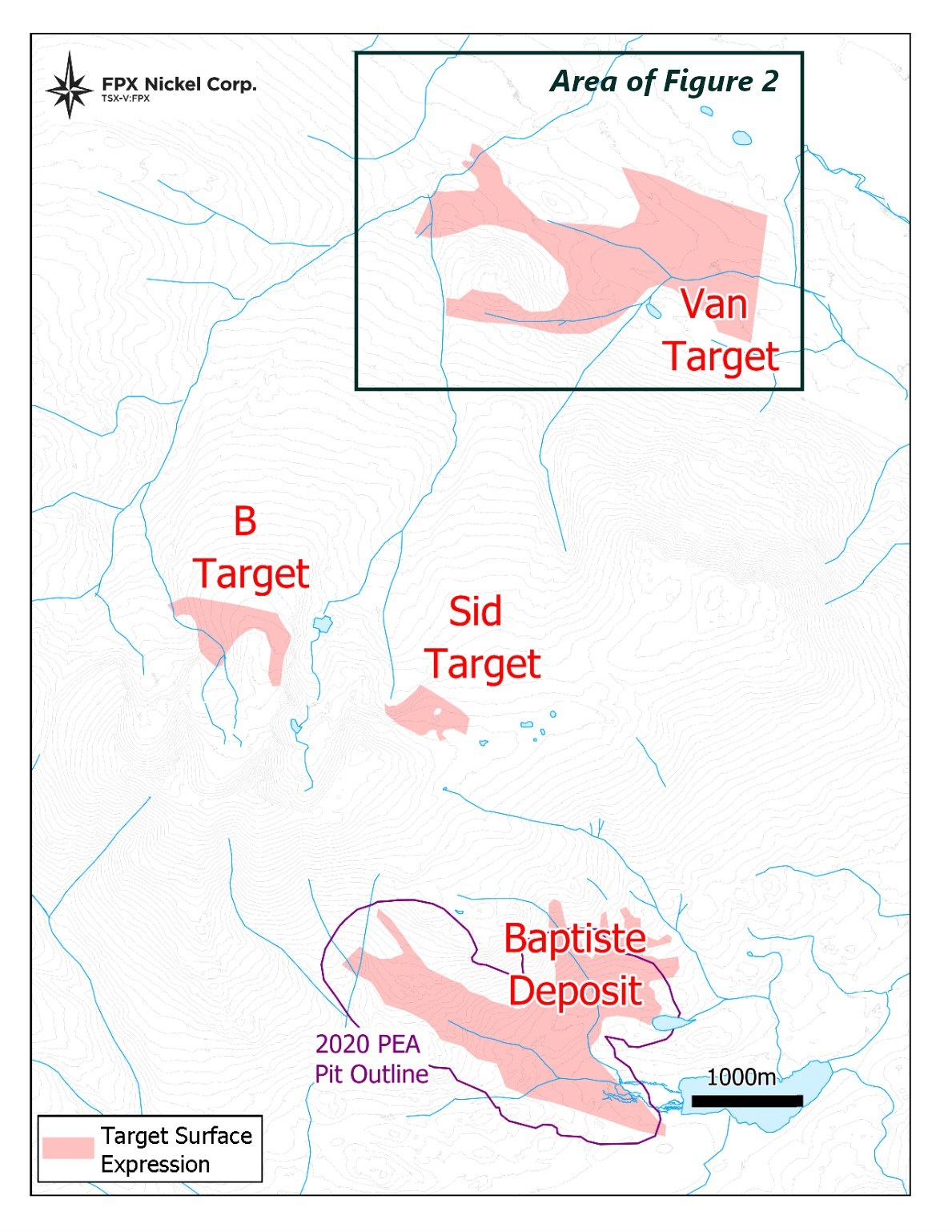 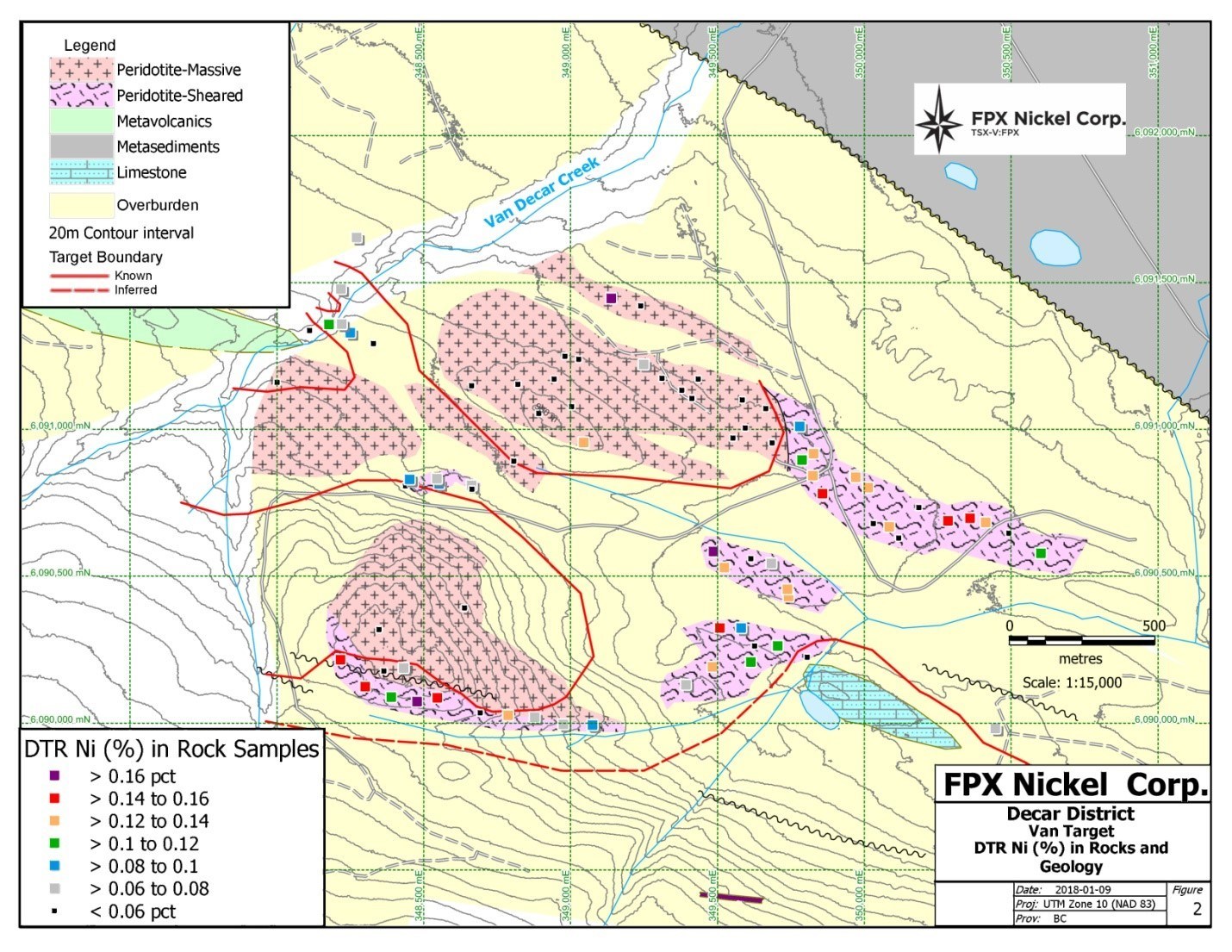 Prior to the start of drilling, the Company will conduct a ground-based magnetic survey to further refine the drill-collar locations for this summer’s program. Drilling at Van is expected to begin in June and will take approximately 8 weeks to complete.

The majority of the inferred resources in the Baptiste mine plan are located along the margins of the open pit, with some of the resource blocks occurring near-surface in higher-grade areas of the deposit (see Figure 3 below).  The Company has developed a three-dimensional drill-hole spacing model where spacing exceeds the 200-metre spacing requirement for categorization of indicated resources.  Drilling at Baptiste is expected to begin in June and will take approximately 8 weeks to complete. 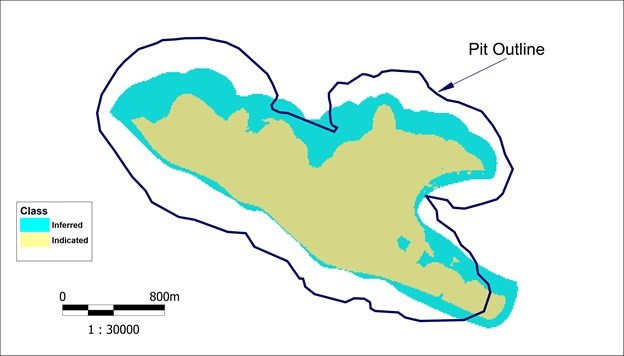 About the Decar Nickel District

Decar hosts a greenfield discovery of nickel mineralization in the form of a naturally occurring nickel-iron alloy called awaruite, which is amenable to bulk-tonnage, open-pit mining. Awaruite mineralization has been identified in four target areas within this ophiolite complex, being the Baptiste Deposit, the B target, the Sid target and Van target, as confirmed by drilling in the first three plus petrographic examination, electron probe analyses and outcrop sampling on all four.  Since 2010, approximately US $24 million has been spent on the exploration and development of Decar.

Of the four targets in the Decar Nickel District, the Baptiste Deposit, which was initially the most accessible and had the biggest known surface footprint, has been the main focus of diamond drilling since 2010, with a total of 82 holes and over 31,000 metres of drilling completed.  The Sid target was tested with two holes in 2010 and the B target had a single hole drilled into it in 2011; all three holes intersected nickel-iron alloy mineralization over wide intervals with DTR nickel grades comparable to the Baptiste Deposit.  The Van target was not drill-tested at that time as rock exposure was very poor prior to logging activity by forestry companies.

FPX Nickel Corp. is focused on the exploration and development of the Decar Nickel District, located in central British Columbia, and other occurrences of the same unique style of naturally occurring nickel-iron alloy mineralization known as awaruite. For more information, please view the Company’s website at www.fpxnickel.com or contact Martin Turenne, President and CEO, at (604) 681-8600 or ceo@fpxnickel.com.

On behalf of FPX Nickel Corp.

Forward-Looking StatementsCertain of the statements made and information contained herein is considered “forward-looking information” within the meaning of applicable Canadian securities laws. These statements address future events and conditions and so involve inherent risks and uncertainties, as disclosed in the Company’s periodic filings with Canadian securities regulators. Actual results could differ from those currently projected. The Company does not assume the obligation to update any forward-looking statement.

Neither the TSX Venture Exchange nor its Regulation Services Provider accepts responsibility for the adequacy or accuracy of this release.

Click here to connect with  FPX Nickel Corp. (TSXV:FPX) for an Investor Presentation.