Investing News Network
74,283 Hectares with multiple targets near existing uranium depositsCanAlaska Uranium Ltd. is pleased to announce that compilation work by the Company's staff has identified uranium potential in three areas of the western Athabasca Basin and a total of 74,283 hectares have been staked .Figure 1To view an enhanced version of Figure 1, please visit: Chymko project is adjacent to the Virgin River shear zone and a ...

CanAlaska Uranium Ltd. (TSXV: CVV) (OTCQB: CVVUF) (FSE: DH7N) ("CanAlaska" or the "Company") is pleased to announce that compilation work by the Company's staff has identified uranium potential in three areas of the western Athabasca Basin and a total of 74,283 hectares have been staked (Figure 1). 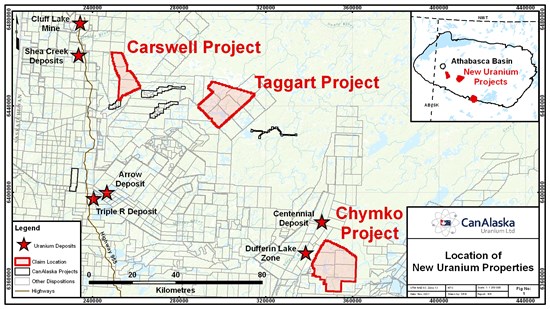 The Chymko project (32,603ha) is adjacent to the Virgin River shear zone and a series of potential shear structures have been identified; a uranium showing is adjacent to one of these structures. The Taggart project (28,328ha) is on trend with the Patterson corridor, which host the Triple R and Arrow deposits with combined reported resources of 472M lbs U3O8. The Carswell project (13,352ha) is located in proximity to the Shea Creek and Cluff Lake deposits with total combined resources and production of 135M lbs U3O8. A major conductive structure has been identified on this property.

Work will continue to identify key targets on each project in preparation for future exploration programs.

CanAlaska CEO, Cory Belyk, comments, "The addition of these three large project areas in the vicinity of world-class uranium deposits and districts in the Athabasca Basin is another example of CanAlaska successfully deploying its project generator model. We look forward to working with new joint venture partners to move these projects forward."

To view the source version of this press release, please visit https://www.newsfilecorp.com/release/105077

/NOT FOR DISSEMINATION, DISTRIBUTION, RELEASE, OR PUBLICATION, DIRECTLY OR INDIRECTLY, IN OR INTO THE UNITED STATES OR FOR DISTRIBUTION TO U.S. NEWSWIRE SERVICES/

Toro Energy Limited (ASX:TOE) (“the Company” or “Toro”) is pleased to advise the Federal government’s Minister for the Environment and Energy, the Hon Josh Frydenberg, has granted environmental approval, subject to implementation conditions, for the Extension to the Wiluna Uranium Project (EPBC 2014/7138) in Western Australia.

The Minister’s approval was received by Toro on 7 July 2017 and is attached to this announcement (Annexure 1).

Following a year that saw uranium rank among the best-performing commodities, 2021 has brought a continued rise in the value of the energy fuel, spurring interest in the sector among investors.

Uranium started the year at US$29.63 per pound, and prices have trended higher over the last 11 months, pushing the nuclear fuel to a nine year high in September, when it hit an intraday high of US$50.76.

Production declines caused by 2020 closures aided in the price growth. However, a widespread push towards nuclear as a clean energy source has served as a primary catalyst for uranium's value increase.

In 2020, world uranium mine production came to 56,287 tonnes of U3O8. Kazakhstan was the top-producing country by far at 19,477 tonnes, followed by Australia and Namibia.

Together, those three nations accounted for over two-thirds of uranium mining, with Kazakhstan taking a 41 percent share. Additionally, a wide variety of uranium-mining companies contribute to the world's production.

But where in the world are the top uranium mines? While many of them are located in Kazakhstan, Canada and Australia, that's not the case for all of the largest uranium mines.

Elevate Uranium Ltd (ASX: EL8) ("Elevate" or "the Company") is pleased to announce that it has received binding commitments for a single tranche placement to raise $11.5 million (before costs) at $0.45 per share, utilising its placement capacity under ASX Listing Rule 7.1 ("Placement"). The Placement introduced a number of new, high quality institutional, sophisticated and professional investors, whilst also being well supported by existing significant shareholders of the Company.

Fabled Definition Drilling to the East Hits Near Surface Mineralization with 257.81 g/t Ag Eq over 1.20 meters in Broader 3.7 Meter Zone