GoviEx Uranium Inc.   is pleased to announce the completion of its initial infill drilling campaign at the Dibwe East deposit in its wholly owned, mine permitted Mutanga Uranium Project in Zambia . The Mutanga Project consists of three mining permits that cover some 720km2, and contains five deposits: Dibwe, Dibwe East, Mutanga, Gwabe and Njame.Drilling highlights Mineralisation is continuous from hole to hole and …

GoviEx Uranium Inc. (TSXV: GXU) (OTCQB: GVXXF) (“GoviEx or the “Company”) is pleased to announce the completion of its initial infill drilling campaign at the Dibwe East deposit in its wholly owned, mine permitted Mutanga Uranium Project in Zambia (the “Mutanga Project”) . The Mutanga Project consists of three mining permits that cover some 720km2, and contains five deposits: Dibwe, Dibwe East, Mutanga, Gwabe and Njame.

GoviEx’s infill drilling campaign, which commenced in May 2021, was aimed at upgrading the inferred mineral resources associated with the Dibwe East deposit to an indicated mineral resources for inclusion into a planned feasibility study for the Mutanga Project. The Dibwe East deposit currently contains 43.1 Mt at an average grade of 304 ppm U3O8 for 28.9 Mlb U3O8, and represents approximately 45% of the total resource tonnage at the Mutanga Project.1 A total of 65 holes for 8,060 metres were completed using down the hole percussion drilling to an average depth of 124 metres on a 100 x 50 metre grid.

“The Mutanga project benefits from being a technically straight forward project due to its low-waste stripping ratio and acid consumption and with a low capital efficiency per pound of forecast annual uranium production.1 The consistency of ore zones and uranium grade reported from this initial infill drilling campaign underpins our confidence in the upgrading potential of mineral resources from an inferred to an indicated category in the Dibwe East, but also indicates potential to extend the mineralized zone, especially to the southwest, beyond the initially interpreted ore boundary. Based on this very positive result we plan, during 2022, to complete the infill resource drilling Dibwe East as well as upgrade the previously completed process work to a feasibility study level of confidence. Having two mine permitted projects; Madaouela uranium project in Niger and the Mutanga Project, in Zambia – GoviEx has a strong project pipeline and is well positioned as we see the uranium market price improving toward its projected long-term trend.” Daniel Major, Chief Executive Officer, commented.

In addition to the infill drilling undertaken at Dibwe East, exploration drilling was completed on three trenches along strike and to the east of Dibwe East, an area that has previously shown anomalous uranium at surface. All three of these trenches reported uranium mineralisation, however after applying the disequilibrium factor of 0.67x the reported grades were below the resource cutoff. As much of the area along strike to the east of Dibwe East is not drilled, further exploration is warranted to test the potential for resource extension in that direction. The next stage of exploration is to undertake further work on the disequilibrium factor to assess its potential variability across the mineral resources. 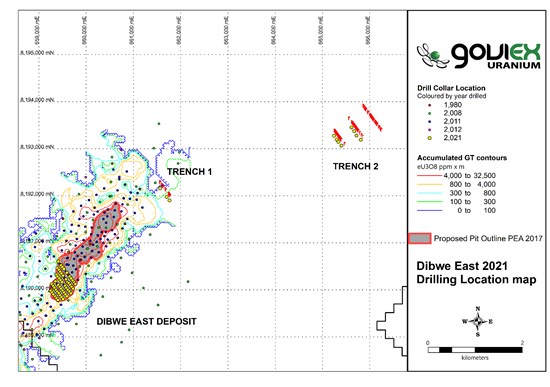 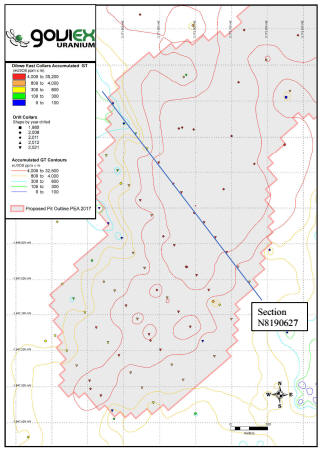 Figure 2: Drill collars coloured by Grade x Thickness accumulations, and GT contours in relation to the projected pit outline from the PEA.

To view an enhanced version of Figure 2 please visit:
https://orders.newsfilecorp.com/files/5017/97716_goviex2.jpg 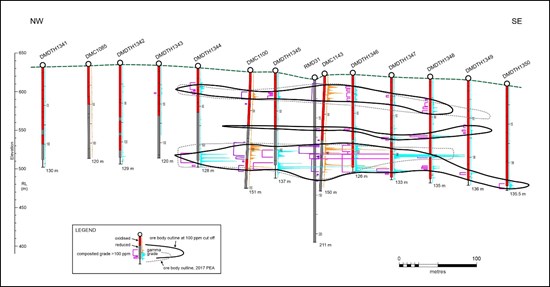 The scientific and technical information in this release has been reviewed and approved by Dr. Rob Bowell, a chartered chemist of the Royal Society of Chemistry, a chartered geologist of the Geological Society of London, and a Fellow of the Institute of Mining, Metallurgy and Materials, who is an independent Qualified Person under the terms of NI 43-101 for uranium deposits. Dr. Bowell has verified the data disclosed in this news release.

The measurement of uranium grade in the uranium industry can be done indirectly by measurement the radioactivity emitted by the daughter products of uranium during decay, and is measured by gamma tool containing a sodium iodide (NaI) crystal, which records counts per second when hit by gamma rays. These counts are converted to uranium grade (ppm eU3O8) by applying a K factor, a dead time correction and other correction factors as required such as casing, hole size, mud density. The K factor and the dead time is unique to each tool, and is determined during calibration. The gamma tool used by Terratec has been calibrated at the Pelindaba facility by Terratec prior arrival on site, and the tool was run weekly in a lined test hole to test repeatability.

Disequilibrium is a known issue in sandstone hosted and in fairly young uranium deposit. Over time, uranium reaches an equilibrium with its daughter products, however this is rarely the case in secondary style sandstone hosted deposits as uranium is a very mobile element, and can be re-mobilised and re-precipitated elsewhere, leaving the more radioactive and less mobile daughter products behind. The factor is determined by comparing assay grades with corresponding gamma readings.

Although the Company believes the expectations reflected in such forward-looking statements are based on reasonable assumptions, it can give no assurances that its expectations will be achieved. Such assumptions, which may prove incorrect, include the following: (i) that the Company will be successful in its exploration and development plans for the Mutanga Project; (ii) that projected low capital expenditures for the Mutanga Project will remain unchanged or improve; (iii) that any proposed drill programs will be completed as planned and meet its objectives; and (iv) that the price of uranium will remain sufficiently high and the costs of advancing the Company’s mining projects will remain sufficiently low so as to permit GoviEx to implement its business plans in a profitable manner.

Factors that could cause actual results to differ materially from expectations include (i) the inability of the Company to successfully complete the exploration and development milestones that are the conditions of the reinstatement of the Chirundu Mining License (12634-HQ-LML); (ii) potential delays due to COVID-19 restrictions; (iii) the failure of the Company’s projects, for technical, logistical, labour-relations, or other reasons; (iv) a decrease in the price of uranium below what is necessary to sustain the Company’s operations; (v) an increase in the Company’s operating costs above what is necessary to sustain its operations; (vi) accidents, labour disputes, or the materialization of similar risks; (vii) a deterioration in capital market conditions that prevents the Company from raising the funds it requires on a timely basis; and (viii) generally, the Company’s inability to develop and implement a successful business plan for any reason.

In addition, the factors described or referred to in the section entitled “Risks Factors” in the MD&A for the year ended December 31, 2020, of GoviEx, which is available on the SEDAR website at www.sedar.com, should be reviewed in conjunction with the information found in this news release.

To view the source version of this press release, please visit https://www.newsfilecorp.com/release/97716