GoviEx Uranium Inc. is pleased to announce that it has executed a drilling contract with Hydro Tech Drilling & Exploration LTD to undertake exploration and resource delineation drilling programs focused at the Company’s Mutanga Uranium Project, in Zambia .”With the reissued Chirundu Mining Permit we are keen to get back to advancing our Zambian assets with the development of Mutanga. The Project benefits from very …

GoviEx Uranium Inc. (TSXV: GXU) (OTCQB: GVXXF) (“GoviEx or the Company”) is pleased to announce that it has executed a drilling contract with Hydro Tech Drilling & Exploration (Z) LTD (“Hydro Tech”) to undertake exploration and resource delineation drilling programs focused at the Company’s Mutanga Uranium Project, in Zambia (the “Project”).

“With the reissued Chirundu Mining Permit we are keen to get back to advancing our Zambian assets with the development of Mutanga. The Project benefits from very simple and straight forward operations due to low-waste stripping, low acid consumption and potentially one of the lowest capital expenditure requirements of its African peers needed to get into production. The mine plan currently forecasts an 11-year mine life and the drill targets identified through trenching, in known uranium intersections, indicate potential for resource extension making this a potential long-life project. Furthermore, considerable metallurgical test work has already been undertaken to a pre-feasibility study standard, providing considerable confidence on the process route considered.” stated Daniel Major, Chief Executive Officer.

GoviEx has planned a 8,000 metre down-hole percussion drilling program, focussed on the Dibwe East deposit and new areas defined by previous trench sampling east of Dibwe East. The objectives of the program are:

Hydro Tech is a Zambian based drilling company that specialises in groundwater and exploration drilling and has been operating for seven years. Terratec Geophysical Services Namibia will provide down-hole logging services including, calibrated gamma log, used to estimate the uranium grade, hole deviation and conductivity log, to interpret the geology. 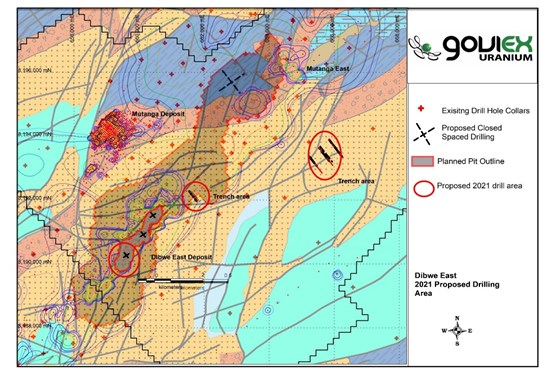 In addition, the Company will start the installation of water points in the nearby village of Hachibozu, which will include: drilling a water well, installation of a wind pump and a water tank. This is part of the Company’s CSR program and aims to help facilitate access to water within the village.

In 2017, the Company filed the “NI 43-101 Technical Report on a Preliminary Economic Assessment of the Mutanga Uranium Project in Zambia“, dated November 30, 2017 (the “PEA“). The PEA was prepared by Qualified Persons from SRK Consulting (UK) Limited.

Highlights of the PEA include the following:

The scientific and technical information in this release has been reviewed and approved by
Dr. Rob Bowell, a chartered chemist of the Royal Society of Chemistry, a chartered geologist of the Geological Society of London, and a Fellow of the Institute of Mining, Metallurgy and Materials, who is an independent Qualified Person under the terms of NI 43-101 for uranium deposits. Dr. Bowell has verified the data disclosed in this news release.

Forward-looking statements include those related to any plans for the further exploration and development of the Project; anticipated low capital expenditure requirements among its African peers needed to get into production; potential for resource extension leading to a potential long-life Project; the stated objectives of the drill program; and the proposed installation of water points in the nearby village of Hachibozu.

Although the Company believes the expectations reflected in such forward-looking statements are based on reasonable assumptions, it can give no assurances that its expectations will be achieved. Such assumptions, which may prove incorrect, include the following: (i) that the Company will be successful in its exploration and development plans for the Project; (ii) that projected low capital expenditures for the Project will remain unchanged or improve; (iii) that the drill program will be completed as planned and meet its objectives; (iv) that the Company will be able to complete its planned CSR work as planned and (v) that the price of uranium will remain sufficiently high and the costs of advancing the Company’s mining projects will remain sufficiently low so as to permit GoviEx to implement its business plans in a profitable manner.

Factors that could cause actual results to differ materially from expectations include (i) the inability or unwillingness of Hydro Tech to complete the drill program as and when planned; (ii) the inability of the Company to successfully complete the exploration and development milestones that are the conditions of the reinstatement of the Chirundu Mining License (12634-HQ-LML); (iii) potential delays due to COVID-19 restrictions; (iv) the failure of the Company’s projects, for technical, logistical, labour-relations, or other reasons; (v) a decrease in the price of uranium below what is necessary to sustain the Company’s operations; (vi) an increase in the Company’s operating costs above what is necessary to sustain its operations; (vii) accidents, labour disputes, or the materialization of similar risks; (viii) a deterioration in capital market conditions that prevents the Company from raising the funds it requires on a timely basis; and (ix) generally, the Company’s inability to develop and implement a successful business plan for any reason.

In addition, the factors described or referred to in the section entitled “Risks Factors” in the MD&A for the year ended December 31, 2020, of GoviEx, which is available on the SEDAR website at www.sedar.com, should be reviewed in conjunction with the information found in this news release.

To view the source version of this press release, please visit https://www.newsfilecorp.com/release/85640