Pacific Empire Minerals Corp. is pleased to announce the receipt of its 2020 Notice of Work Mineral Exploration Permit from the BC Ministry of Energy Mines and Petroleum Resources. The multi-year exploration permit encompasses 100 reverse circulation and 20 diamond drill hole sites at the Company’s flagship, Jean Marie Cu-Au-Ag-Mo project in north-central British Columbia.2020 Exploration DrillingDrilling at Jean …

Pacific Empire Minerals Corp. (TSXV:PEMC) (“Pacific Empire”, “PEMC” or the “Company”) is pleased to announce the receipt of its 2020 Notice of Work Mineral Exploration Permit from the BC Ministry of Energy Mines and Petroleum Resources. The multi-year exploration permit encompasses 100 reverse circulation and 20 diamond drill hole sites at the Company’s flagship, Jean Marie Cu-Au-Ag-Mo project in north-central British Columbia.

Drilling at Jean Marie will initially focus on the A-Zone, proximal to numerous 1974 percussion drill holes which intersected attractive copper grades. Despite the presence of these mineralized intervals, no further drilling has taken place since the first drill program when the A-Zone was discovered.

The drill target area is an extension of the A-Zone, which is characterized by a 900 metre by 300 metre disruptive magnetic low. This feature lies at the boundary of the previously drilled area and sits directly adjacent to the best drill hole from 1974 (P74-27), which graded 0.3% copper over the entire 76.2 metre length of bedrock drilled, including 27.4 metres grading 0.53% copper and ended in mineralization. PEMC geologists believe the magnetic low represents the highest probability for extension of the A-Zone and this target will be the location for the first exploration drill holes. Pad building and road completion has been completed with drilling set to begin in the coming days.

A property wide airborne magnetic survey has also been commissioned. Results from this survey will be interpreted in combination with modern GPS-based rock geochemical sampling completed by PEMC during 2020. The geochemical sampling encountered gold, silver and copper mineralization at all three existing zones. Following the completion of the magnetic survey the targets will be prioritized for drill testing. 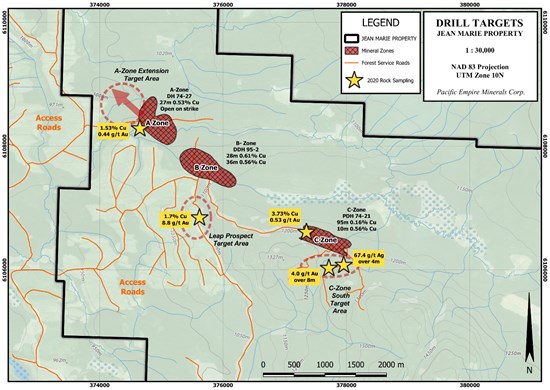 Historical work conducted on the Jean Marie Project includes over 10,000 metres of drilling and dozens of ground-based geophysical and geochemical surveys, with the majority of exploration being completed by Cominco Ltd. between 1970 and 1974. Historical exploration activities were focused on drilling in three copper porphyry zones: the A, B and C Zones. Each of the three mineralized zones straddle the Jean Marie fault, a significant controlling structure that has been mapped for over 12 km on the property.

The A Zone has seen limited historical drilling, with the deepest drilling being 92 vertical metres. Mineralization at the A Zone exists as chalcopyrite dominated by pyrite, with rare covellite and bornite. Rock sampling by PEMC during 2020 confirmed the presence of anomalous to highly anomalous gold values associated with chalcopyrite mineralization and monzonite dikes, though the historical drill core was not systematically assayed for gold. Historical exploration encountered angular float on the southwest margin of the A zone assaying up to 4.43% copper and 0.95 g/t gold.

The B Zone has seen more extensive drilling, with the deepest historical drilling being a 277 m vertical drill hole, J97-11. A high-grade interval in this hole occurs between 181 and 208 metres, where a hydrothermal breccia containing angular clasts of porphyritic material with bornite and chalcopyrite graded 1.2% copper over 27 metres. The presence of this breccia provides direct evidence of a mineralized porphyry system at depth beneath the B-zone.

The most recent drilling at any of the three drill indicated zones was completed at the B zone in 1997. The final hole of the 1997 program intersected 184 m @ 0.33% copper, which includes an interval of hydrothermal breccia grading 1.2% copper over 27 metres.**

The C Zone is characterized as a broad area of low-grade copper-molybdenum mineralization, with the easternmost hole in the zone grading 0.17% copper over the entire 85.3 metre length of bedrock drilled. However, the presence of a large, strong copper-in-soil anomaly measuring 2,500 x 600 metres, immediately north and east of the C zone, with soil samples assaying up to 0.66% copper suggests more appreciable copper mineralization may exist at depth. The presence of widespread, locally intense clay alteration further suggests there may be potential for higher copper grades at depth.

If you would like to stay informed of the latest corporate activities please click here to provide consent and receive news, updates and important information as we move our projects forward.

** The Company has not verified historical drilling results but has reviewed the historical sampling and analytical procedures and has no reason to believe the historically reported results are unreliable or misleading.

Rory Ritchie, P.Geo., Vice President of Exploration for the Company, serves as a qualified person as defined by National Instrument 43-101 and has reviewed the scientific and technical information in this news release, approving the disclosure herein.

PEMC is an exploration company based in Vancouver, British Columbia, that employs a “hybrid prospect generator” business model and trades on the TSX Venture Exchange under the symbol PEMC. The Company’s strong portfolio of projects is a result of continuous generative work conducted since the Company’s inception in 2012.

By integrating the project generator business model with low-cost RC drilling, the company intends to leverage its portfolio by identifying, and focusing on, the highest quality projects for partnerships and advancement.

To view the source version of this press release, please visit https://www.newsfilecorp.com/release/65197