Sanatana Resources. (TSXV: STA) (“Sanatana” or the “Company”) has initiated exploration at the Oweegee Dome copper-gold project located within the famous “Golden Triangle” of northwest British Columbia (see news release of July 21, 2021 for further details on the Oweegee project). The Oweegee Dome project is under option from ArcWest Exploration and is situated approximately 45 km east of the giant KSM-Iron Cap porphyry Cu-Au deposits (Seabridge Gold) and Tudor Gold’s Treaty Creek project, for which a measured and indicated resource estimate of 17 million oz Au and 93 million oz Ag was recently reported.

Peter Miles CEO states, “Sanatana is both excited to initiate exploration at the Oweegee Dome project and to be working with Tyler Ruks and Jeff Kyba and their team at ArcWest Exploration. Oweegee is an underexplored copper gold porphyry system lying within a region that is a proven host for exceptional copper-gold deposits. These include Newcrest Mining-Imperial Metals’ jointly owned Red Chris mine and Newmont Corporation’s Saddle North project, which was recently acquired from GT Gold in a $393 million transaction.”

In mid-August Sanatana mobilized a field crew to the Bell 2 camp, approximately 25 km north of the Oweegee Dome project. The property hosts multiple Cu/Au occurrences some associated with porphyry dykes and intrusives that occur over a 20km2 area and have received limited previous exploration. The 2021 Oweegee Dome exploration is focused on the highly gossanous Delta prospect and peripheral areas, as it is the most developed.

Historical shallow drilling of the Delta prospect focused on a copper-in-soil anomaly at an easily accessible ridge with an Eskay Creek target in mind. Multiple drill holes intersected intensely altered QSP/clay-pyrite, altered diorite and porphyritic intrusions and intrusive breccias. Breccia fragments of porphyry-style veins with quartz-pyrite+/-chalcopyrite centrelines are locally present. The most SE holes show increased epidote and zinc mineralization which matches characteristic zoning in a copper porphyry system and indicated an exploration vector pointing to the NW as the centre. The alteration style in the drill holes is consistent to that found zoned above or beside other known copper porphyry deposits.

Mapping in 2021 progressed from the east to the west of the Delta prospect and revealed numerous outcrops of previously unrecognized diorite and diorite breccias. The mapping, previous drilling, and the alteration are consistent with a typical Cu-Au system buried or partly buried beneath its own alteration cap.

This work has mapped strong copper bearing stockwork ‘B’ veins at the Malloy zone and copper-bearing potassic alteration (biotite) northwest of the Delta zone at Snowpatch Creek. Eleven historical chip/panel rock samples collected near the Malloy zone averaged 0.53% Cu, 1.09 g/t Au and 4.8 g/t Ag. Downslope of this area intrusions with quartz-chalcopyrite veining have been located, sampled and sent for assay. They occur below a prominent gossan and above a large Cu-Au soil anomaly which assayed up to 0.1% Cu and 0.9 g/t Au (Figure 1). This highly prospective area has been named the Malloy zone.

The Malloy zone is the top-priority first drill target to test the true width of the zone and the interpreted blind Cu-Au system. The Delta prospect is capped by post-mineral volcanic rocks that possibly obscure a much larger system that plunges to the north beneath this cap. 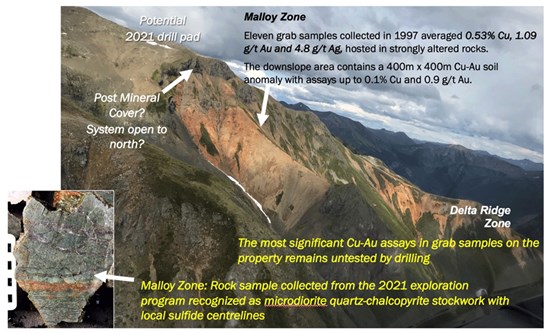 Sanatana Resources Inc. is a mineral exploration and development company focused on high-impact properties in Canada and the Western Pacific. With an award-winning technical team and experienced management and board of directors, Sanatana is based in Vancouver and is listed on the TSX Venture Exchange (TSXV: STA).

To view the source version of this press release, please visit https://www.newsfilecorp.com/release/95001