Highlights:Sanatana and ArcWest announce discovery of quartz-magnetite-specular hematite-chalcopyrite veining at the Skowill prospect, now named the Tarn zone. The Tarn zone is coincident with a 500m magnetic high, truncated on the north edge of the existing airborne magnetic survey.An airborne survey designed to complete coverage of the Skowill prospect with magnetics, EM and radiometrics is under way.The discovery …

Sanatana Resources. (TSXV: STA) (“Sanatana” or the “Company”) has identified a new copper-bearing zone, named the Tarn zone, at the Oweegee Dome copper-gold project located within the famous “Golden Triangle” of northwest British Columbia. The discovery of the Tarn zone greatly upgrades the Skowill prospect and augments the porphyry copper-gold mineralization observed at the Malloy and Snowpatch zones over 8 km south at the Delta prospect. The Oweegee Dome project is the subject of an option agreement between Sanatana and ArcWest Exploration Inc. (“ArcWest”).

Buddy Doyle, Sanatana’s President, commented: “Sanatana is pleased to have rapidly advanced our geological understanding of the Oweegee Dome project and to be working with Tyler Ruks and his team at ArcWest. The discovery of copper mineralization at the Tarn zone along with the copper-gold porphyry mineralization at the Malloy and Snowpatch zones greatly enhances the overall perspectivity of the Oweegee Dome project. Our recent work greatly supports our original exploration concept that Oweegee hosts multiple rock-covered porphyry systems. Our continuing efforts will focus on identifying drill targets for 2022.”

A presentation on the Oweegee Project can be seen on the Company’s website www.sanatanaresources.com

Quartz-magnetite-specular hematite-chalcopyrite veining has been discovered at the Skowill East target area located about 8 km north of the Delta target area. The discovery showing, named the Tarn Zone, is situated within a 500 m wide magnetic high anomaly which is cut off by due to the boundary of the previous airborne survey and remains open to the north. Veining is flanked by intense silica-pyrite alteration with trace disseminated chalcopyrite and local barite veining and situated at the southeast end of a 2 km gossanous ridge and underlain by variably altered volcanic rocks recently dated at 204 Ma (ie, Red Chris age; George et al., 2021). 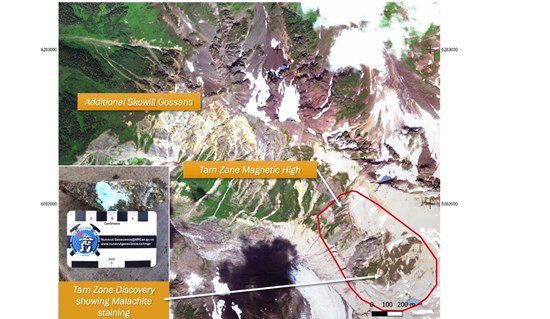 Porphyry style quartz-chalcopyrite stockwork veins (‘B’ veins) hosted in microdiorite have been identified at the Molloy zone within the much larger gossanous Delta target area. The Delta target area is underlain by previously unrecognized altered intrusions and intrusion breccias with associated anomalous copper-gold in soil geochemistry. Additional new observations indicate the altered intrusions are overlain by post-mineral volcanic rocks and may continue under cover and be much larger than exposed. Despite the presence of porphyry Cu-Au style veining in outcrop, the Molloy zone has never been drill tested.

Pyrite-chalcopyrite-bornite bearing, potassic altered breccia has been identified at Snowpatch Creek located about 2 km west of the Molloy zone.

A 3-D IP survey over the Delta target area has been completed over 10 line km across six lines, results are pending.

An airborne magnetic survey of the northern portion of the property is ongoing and aims to cover the Tarn Zone discovery and surrounding Skowill East area.

The Delta area is underlain by a succession of sedimentary and mafic volcanic rocks intruded by widespread, variably altered and Cu-Au mineralized porphyries and associated breccias of predominantly dioritic composition. Alteration throughout Delta is dominated by QSP and clay-pyrite. Potassic alteration has been observed as secondary biotite replacement of mafic minerals at the HEG showing at Snowpatch Creek.

Historical drilling of Delta focused on the east side (Delta Ridge) and included eight shallow inclined holes. Several drillholes intersected intensely QSP/clay-pyrite altered porphyritic intrusions and abundant sulfide rich breccia. Fragments of porphyry style veins with quartz-pyrite+/-chalcopyrite centrelines are locally present in the breccias. Despite the presence of intense QSP/clay-pyrite alteration, drill holes in this zone returned significant Cu-Au intercepts including 70.4 m of 0.26 g/t Au and 0.12% Cu (DC 96-02) and 86.3 m of 0.23 g/t Au and 0.1% Cu (DC07-03). The presence of Cu-Au mineralized QSP alteration on the property suggests higher Cu-Au grades might be encountered with depth as the system transitions to potassic dominant alteration.

Initial 2021 exploration of the Delta area included sampling and delineation of the Molloy showing. Eleven outcrop samples collected by previous workers in 1997 from the Molloy showing averaged 0.53% Cu, 1.09 g/t Au and 4.8 g/t Ag and is associated with a significant Cu-Au in soil anomaly down slope and along strike which returned up to 0.1% Cu and 0.9 g/t Au in soil.

Mapping and re-sampling in August 2021 of the Molloy showing indicate Cu-Au mineralization is hosted within quartz-chalcopyrite centreline veins and stockwork cutting fine grained equigranular microdiorite. The microdiorite is flanked to the west by a broad area of intense quartz-sericite-pyrite altered diorite breccia and capped by interpreted post mineral volcanic rocks. This suggests the microdiorite hosted mineralization is open to the north and possibly larger than exposed at surface. This prospective zone of porphyry Cu-Au style stockwork veining has yet to undergo drill testing.

The Oweegee Dome project hosts a number of additional porphyry Cu-Au targets outside of the Delta target area including the Skowill East zone located 8 km north of Delta Zone. The gossanous Skowill East zone is underlain by a structurally complex succession of Permian limestone and variably altered volcanic rocks that have recently been dated at 204 Ma (i.e. Red Chris age; George et al., 2021). The southeast margin of the two km gossanous ridge is underlain by a prominent 500 m diameter magnetic high which remains open to the northwest. Field exploration resulted in the discovery of magnetite-specular hematite-quartz-pyrite-chalcopyrite veining flanked by intense silica-pyrite+/-sericite alteration with local barite veining. This discovery has been named the Tarn zone. Additional mapping and sampling of this new discovery is scheduled for September 2021. An airborne magnetic survey of the Skowill Creek area recently is underway.

A 3-D IP survey of the Delta zone has been completed by Dias Geophysics. The survey team completed over 10 line km across six lines roughly orientated north-south and covered the Delta Ridge, Molloy and Snowpatch target areas. Geological mapping and sampling of the Delta target area is ongoing and is expected to be completed by the end of the month.

Reconnaissance mapping and sampling of additional porphyry Cu-Au targets throughout the 31,077 hectare Oweegee Dome property is ongoing. Assay and geophysical results will be used to delineate targets for a 2022 drill campaign.

Investors are cautioned that Sanatana has not verified the data from the KSM-Iron Cap, Treaty Creek and Red Chris deposits. Further, the presence and style of mineralization on these properties is not necessarily indicative of similar mineralization on the Oweegee Dome project. Historical assays from drill programs on its properties have not been verified by Sanatana but have been cited from sources believed to be reliable.

Sanatana Resources Inc. is a mineral exploration and development company focused on high-impact properties in Canada and the Western Pacific. With an award-winning technical team and experienced management and board of directors, Sanatana is based in Vancouver and is listed on the TSX Venture Exchange (TSXV: STA).

To view the source version of this press release, please visit https://www.newsfilecorp.com/release/96763