Investing News Network
Nickel Rock Resources Inc.    is pleased to announce the confirmation of a significant new nickel discovery from the maiden drilling program at the Van Target at nearby FPX Nickel Corp. Baptiste Deposit in the Decar Nickel District as announced by FPX Nickel Corp. on October 19, 2021 . As reported on July 8, 2021 Nickel Rock has optioned out an 80% interest on certain mineral claims within the Hard Nickel 4 and ...

Nickel Rock Resources Inc. (the "Company" and "Nickel Rock") (TSX-V: NICL) (OTCQB: NICKLF) (FSE: NMK2) is pleased to announce the confirmation of a significant new nickel discovery from the maiden drilling program at the Van Target at nearby FPX Nickel Corp. (TSX-V: FPX) Baptiste Deposit in the Decar Nickel District as announced by FPX Nickel Corp. on October 19, 2021 ( News Release ). 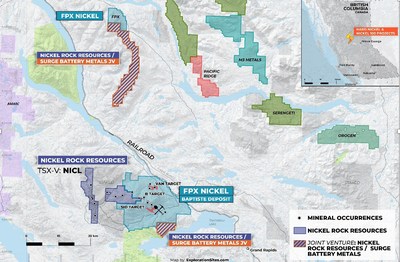 As reported on July 8, 2021 , Nickel Rock has optioned out an 80% interest on certain mineral claims within the Hard Nickel 4 and Nickel 100 exploration project, to Surge Battery Metals (TSXV: NILI) in order to concentrate on its exploration efforts on the Nickel Group Claims directly adjacent to the FPX Nickel Corp. (TSXV: FPX) Baptiste Nickel Deposit.  The option transaction remains subject to TSX Venture Exchange approval.

On September 3, 2021 , the Company announced ( News Release ) that it has completed the second phase of the its initial exploration program has been completed on its Nickel exploration claims located in northern British Columbia, Canada . The BC Nickel Exploration Project (the "Project") consists of four non-contiguous mineral claims groups held by Nickel Rock Resources Inc. through three separate agreements. The exploration stage project is in the Trembleur Lake area of central British Columbia , partially adjacent to FPX Nickel Corp.'s Decar Nickel Project, which is an advanced project targeting awaruite, a nickel-iron alloy mineral, hosted by serpentinized ultramafic intrusive rocks of the Trembleur Ultramafic Unit.

About the Nickel Project

The subject claims are partially underlain by rocks like those hosting the Decar project of FPX Nickel where mineralization includes nickel, cobalt, and chromium.  Previous exploration suggests that at least some of the nickel mineralization occurs as awaruite which is a naturally occurring nickel-iron alloy important in the manufacture of environmentally efficient batteries for the electric vehicle markets globally. The mineral awaruite is both highly magnetic and very dense and is therefore amenable to concentration by mechanical processes including magnetic and gravity separation. This style of deposit is unique and presents considerable metallurgical and processing cost saving advantages.

Significantly, the awaruite found is found in a serpentinized ultramafic rock. In 2018, G. Dipple at the University of British Columbia began the Geoscience BC funded research project "Carbon Mineralization Potential Assessment for BC" scheduled for completion in early 2021. In late 2020 a preliminary assessment report was published. One of the key items from the report was " The use of reactive serpentinite tailings from nickel mining as a carbon sink has the potential to make nickel mining carbon neutral or a net carbon sink. " The presence of serpentinized ultramafic rocks has been repeatedly documented in the areas covered by the claims of the Nickel Rock Projects, as well as at FPX Nickel Corp.'s Decar Project (Dipple, G. et.al., Geoscience BC Report 2020-15).

The Company has seen the commodity spot price for nickel to be in a steady uptrend while world stockpiles have been on the decline and EV manufacturers are calling for more supply of nickel because nickel quantities are increasing in batteries as they increase the amount of charge a battery can hold, thus allowing the EV's to travel greater distances.  One such company is Tesla Inc., the world's leading EV manufacturer. Tesla's Founder, Elon Musk , stated that a large contract would be signed if a company could produce nickel with a lowered carbon footprint by using more environmentally friendly ways of mining ( Reuters: September 11, 2020 ). Robert Setter , Company President and CEO comments " Elon Musk's comments made waves in the nickel space and several juniors have benefited from his comments and surged 2 to 3 times their value."

Robert Setter , Company President and CEO continues "We are very pleased with the results from our initial exploration program on the Hard Nickel and Nickel 100 claim group and specifically with the work completed during phase 2 of this initial exploration program.   So far, we have recorded some relatively high Ni readings measured via portable XRF on the Nickel S block, as mentioned in our news from June 28, 2021 , and our geological team suspects these ultramafic rocks have potential to host awaruite mineralization.  This second phase of exploration includes both soil and rock sampling, technical report writing, mapping and assay work, with the remaining work to be done on trenching, geological, geochemical and geophysical surveying."

Recap of the Company's 2021 Work Program

The Company currently has sufficient funds in its treasury to fully fund its 2021 proposed work program and its remaining working capital needs for 2021 and 2022.

The proposed work program consists of trenching, surface exploration, diamond drilling, camp construction, and exploration activities to support drilling and trenching such as soil sampling, rock sampling, prospecting, and geological mapping. The company proposes a 12-man camp to be built in a cirque on the north slope of the un-named mountain west of and adjacent to Mount Sydney Williams, and will be built next to a sub-alpine lake at the headwaters of Van Decar Creek . The location of camp was selected based on past exploration camps at this location and is suitable for supporting exploration. Camp will be used to accommodate field personnel and will be accessed with helicopter.  The work program is managed by Jeremy Hansen , P. Geol. and Hardline Exploration Corp.

The Company estimates that this 2021 work program includes a total of $600,000 in exploration expenditures.

Jacques Houle , P.Eng., a qualified person as defined by NI 43 – 101, is responsible for the technical information contained in this release. Readers are cautioned that the information in this press release regarding the property of FPX Nickel Corp is not necessarily indicative of the mineralization on the property of interest.

The Company owns a 100% in 77 lithium placer claims covering over 640 hectares in Clayton Valley. Clayton Valley is a down-dropped closed basin formed by the Miocene age Great Basin extension and is still active due to movement along the Walker Lane structural zone.  As a result, the basin has preserved multiple layers of lithium bearing volcanic ash, resulting from multiple eruptive events over the past 6 million years including eruptions from the 700,000-year-old Long Valley Caldera system and related events.  These ash layers are thought to contribute to the lithium brines extracted by Albemarle and are also likely involved in the formation of the exposed lithium rich clay deposits on the east side of Clayton Valley. https://nickelrockresources.com/clayton-valley-lithium/

The Mount Sidney Williams Group consists of five claim blocks in four groups with a total area of 6,125.32 hectares in the area surrounding Mount Sidney Williams, both adjoining and near the Decar project of FPX Nickel Corp., located 100 kilometres northwest of Fort St. James, B.C. , in the Omineca mining division. Metallic mineralization includes nickel, cobalt, and chromium. At least some of the nickel mineralization occurs as awaruite.  The Mitchell Range Group area claim consist of two contiguous claim blocks covering 3,134.70 hectares with demonstrated metallic mineralization including nickel, cobalt, and chromium. Nickel cobalt mineralization has not been well explored, but the presence of awaruite has been documented. The Company has optioned out an 80% interest on certain mineral claims within the Hard Nickel 4 and Nickel 100 exploration project, to Surge Battery Metals Inc. (TSXV:NILI).  The transaction is subject to Exchange approval.

The Company has entered into an Option Agreement to acquire a 100% interest, subject to a 2% NSR, in 6 mineral claims (Funk claims) located approximately 15 km west of Mt Sydney Williams near Fort St James , BC.

The Company also entered into an option agreement whereby the Company may earn an undivided 100% interest in the Klone Group of mineral claims (1,400 ha) adjoining the property of FPX Nickel Corp (TSXV:FPX) located 100km northwest of Fort St. James BC in the Omineca Mining division.

The Company has also entered an option

FPX Nickel Corp. (TSXV: FPX) (OTCQB: FPOCF) (" FPX " or the " Company ") is pleased to announce results from Phase 1 of an ongoing three-phase metallurgical test program to support the continued development of the Company's Baptiste Nickel Project (" Baptiste " or the " Project ") at the Decar Nickel District in central British Columbia.  The metallurgical test program is aimed at validating and optimizing the flowsheet outlined in the Project's 2020 Preliminary Economic Assessment (" PEA "), and to support the development of a preliminary feasibility study (" PFS ").

Battery Mineral Resources Corp. (TSXV: BMR) (OTCQB: BTRMF) ("Battery" or "BMR" or the "Company") is pleased to announce encouraging drill core assay results from the on-going 2021 exploration and in-fill Dalmacia drill program at the Punitaqui mine complex ("Punitaqui") in Chile. Punitaqui is slated for resumption of copper concentrate production in mid to late-2022. Dalmacia is located in the southern portion of the Punitaqui area about 6 kilometers south of the Punitaqui copper processing plant. The Dalmacia target is the second of several historic zones drilled by BMR with partially delineated mineralized zones and established underground access.

Cobalt prices have been on the rise this past year, with analysts remaining bullish on the key raw material, which is used in electric vehicle (EV) batteries. Demand is soaring as the electronics industry comes to rely on cobalt, and as the world continues to digitise and electrify, its use will only increase.

EV sales are on the rise, and these vehicles require lithium-ion batteries to run. Typically around 9 kilograms of cobalt are used to manufacture each battery, and one battery alone can have as much as 20 kilograms. As long as demand for EVs continues to go up, so too will demand for cobalt — and the EV boom has only just begun.

Cobalt is also key in several different alloys with a variety of uses, including in gas turbine engines and magnets. Particularly tough cobalt alloys, such as tungsten carbide and chromium-cobalt, can be used to cut and drill steel.

Coquitlam, BC TheNewswire - December 6 2021 - Canada Silver Cobalt Works Inc. (TSXV:CCW) (OTC:CCWOF) (Frankfurt: 4T9B) (the " Company " or " Canada Silver Cobalt ") announces that, due to strong investor demand, it has agreed with Research Capital Corporation, as sole bookrunner, and together with Canaccord Genuity Corp. as co-lead agents (together, the " Agents "), to increase the size of the previously announced best efforts private placement offering for gross proceeds from up to $2,000,000 to up to $3,000,000 (the " Offering "). For more details on the Offering, refer to the Company's previous press release dated December 3, 2021, as filed on SEDAR at www.sedar.com.

Electra Battery Materials Corporation (TSXV: FCC) (OTCQX: FTSSF) (the "Company") is pleased to announce the results from its Annual and Special Meeting of Shareholders held December 2, 2021 .