SilverCrest Metals Inc. (“SilverCrest” or the “Company”) is pleased to announce that its 2021 planned infill drilling for the Babi Vista Vein (“Babi Vista”), Babi Vista Vein Splay (“Splay”), and Granaditas  Vein 1 Vein (“Granaditas”) is nearing completion, along with continuation of expansion drilling in the Babicanora Area of its Las Chispas Project (“Las Chispas” or the “Project”) located in Sonora, Mexico ( see following Tables and attached Figures ). The objective of this drilling program is to increase drill density in an area proximal to current and planned underground development. This drilling is targeting conversion of an estimated 15.4M oz AgEq grading 9.97 gpt Au and 707.9 gpt Ag, or 1,574 gpt AgEq (86.9:1 Au:Ag ratio, see note below tables) of Inferred Resources (as stated in the “2021 Feasibility Study” 1 ) to higher confidence Indicated Resources to support an updated Mineral Reserve and Life of Mine Plan (“LOM”) in 2022.

N. Eric Fier , CPG, P.Eng, and CEO, remarked, “SilverCrest’s strategy for its infill drilling program is to efficiently use our capital to optimize the LOM through increasing confidence in high-grade Inferred Resource veins proximal to planned underground infrastructure. The infill program has confirmed the presence and continuity of multi-kilogram per tonne silver equivalent grades within the footprints that helped define the veins in the 2021 Feasibility Study. The program also confirmed discovery of Shoot 201, located in the Splay, which shows some of the highest precious metal grades at the project and is not yet considered in the Las Chispas Mineral Reserve. We remain focused on execution of the Las Chispas Project construction and underground mine development and will evaluate the potential opportunity for in-vein drifting in the Splay and Shoot 201 to complete further technical evaluation. With the infill program nearing completion, the drilling focus will shift towards expansion and grass roots exploration work on the over 30 veins on the Las Chispas property that remain undrilled or are not yet fully tested.”

The Company’s focus for the infill drill program to date was to target the 15.4 Moz AgEq Inferred Resources in the Babi Vista, Splay and Granaditas veins. At an average grade of greater than 1,500 gpt AgEq (uncapped, undiluted), these ounces have a grade more than 70% higher than the average grade of the 2021 Feasibility Study Mineral Reserve (94.7 Moz AgEq at an average grade of 879 gpt AgEq, capped and diluted).  The infill drilling prioritized drilling ounces near existing infrastructure which have the potential to further de-risk and improve the current mine plan.

Infill drilling has shown that high-grade footprints (grading >150 gpt AgEq) for the infilled veins are similar to previous footprints presented in the 2021 Feasibility Study. As mentioned in a news release dated April 15, 2021 , this combined footprint for Babi Vista, Splay, and Granaditas, including Mineral Resources and exploration high-grade intercepts, can be traced for an estimated 1.3 kilometres of strike length.

Drill intercept highlights from the infill program that are reported in this release are tabulated below. All grades are reported as uncapped and undiluted. Note that the same drill hole number may be shown for different veins. This is due to the same hole intercepting multiple veins.

All assays were completed by ALS Chemex in Hermosillo, Mexico , and North Vancouver, BC , Canada .

Unnamed vein intercepts, as stated in above table, represent blind (not present at surface) veins that were intersected while drilling between or below Babi Vista, Splay, Granaditas and Babicanora Norte veins. Further drilling may show vein or zone continuity in multiple holes to suggest a new discovery.

With the planned 2021 infill drilling nearing completion, a total of 11 drills are currently active at Las Chispas in the Babicanora Area including eight (8) surface drills and three (3) underground drills. SilverCrest’s 2021 Company-wide exploration program budget is US$42 million (see News Release dated February 24, 2021 ). During the first seven months of 2021, SilverCrest has incurred an estimated $14 million for the Company’s drilling programs at Las Chispas and Picacho. The focus of surface drilling efforts at Las Chispas will transition from infill to expansion and new exploration targets within the Babicanora area.  Once infill drilling is completed in Q4, 2021, the technical team will begin to evaluate the work necessary to potentially add these ounces into an updated mineral reserve and LOM in 2022.

The Qualified Person under National Instrument 43-101 Standards of Disclosure for Mineral Projects for this news release is N. Eric Fier , CPG, P.Eng, and CEO for SilverCrest, who has reviewed and approved its contents.

ABOUT SILVERCREST METALS INC.
SilverCrest is a Canadian precious metals exploration and development company headquartered in Vancouver, BC , that is focused on new discoveries, value-added acquisitions and targeting production in Mexico’s historic precious metal districts. The Company’s top priority is on the high-grade, historic Las Chispas mining district in Sonora, Mexico , where it has completed a feasibility study on the Las Chispas Project and is proceeding with mine construction. Start-up of production at the Las Chispas Mine is targeted for mid-2022. SilverCrest is the first company to successfully drill-test the historic Las Chispas Property resulting in numerous high-grade precious metal discoveries. The Company is led by a proven management team in all aspects of the precious metal mining sector, including taking projects through discovery, finance, on time and on budget construction, and production.

FORWARD-LOOKING STATEMENTS
This news release contains “forward-looking statements” and “forward-looking information” (collectively “forward-looking statements”) within the meaning of applicable Canadian and United States securities legislation. These include, without limitation, statements with respect to: the strategic plans, timing and expectations for the Company’s exploration programs at the Las Chispas Project and the start up of production at the Las Chispas Mine by mid-2022. Such forward looking statements or information are based on a number of assumptions, which may prove to be incorrect. Assumptions have been made regarding, among other things: impact of the COVID-19 pandemic; the reliability of mineralization estimates, mining and development costs the conditions in general economic and financial markets; availability of skilled labour; timing and amount of expenditures related to rehabilitation and drilling programs; and effects of regulation by governmental agencies. The actual results could differ materially from those anticipated in these forward-looking statements as a result of risk factors including: uncertainty as to the impact and duration of the COVID-19 pandemic; the timing and content of work programs; results of exploration activities; the interpretation of drilling results and other geological data; receipt, maintenance and security of permits and mineral property titles; environmental and other regulatory risks; project cost overruns or unanticipated costs and expenses; and general market and industry conditions. Forward-looking statements are based on the expectations and opinions of the Company’s management on the date the statements are made. The assumptions used in the preparation of such statements, although considered reasonable at the time of preparation, may prove to be imprecise and, as such, readers are cautioned not to place undue reliance on these forward-looking statements, which speak only as of the date the statements were made. The Company undertakes no obligation to update or revise any forward-looking statements included in this news release if these beliefs, estimates and opinions or other circumstances should change, except as otherwise required by applicable law. 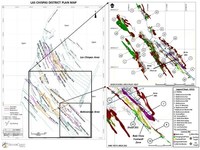