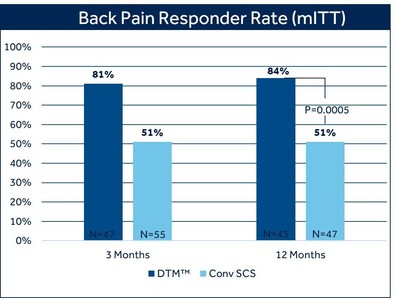 Pain relief was measured by the Visual Analog Scale (VAS), a widely used and accepted measure for pain intensity that records patient-reported pain levels on a scale of 0-10. Fifty-percent pain relief, as measured by VAS, is a recognized industry standard to define therapy success. The majority of DTM SCS patients in this study exceeded this threshold, with seven out of ten experiencing profound back pain relief at 12 months.

Patients treated with DTM SCS also reported an average VAS score reduction of 75% in back pain, compared with 50% treated with conventional SCS. Average VAS scores for patients treated with DTM SCS at 12 months were 1.74 for back pain and 1.45 for leg pain. 1 The term remitter has previously been used to classify patients with a pain score of 2.5 or less. As a group, patients in the DTM SCS group clearly fell below this level with a mean VAS score of 1.74 for back pain and 1.4 for leg pain.

“DTM SCS has the potential to improve outcomes for patients with chronic back pain,” said Michael Fishman , M.D., MBA, anesthesiologist and Interventional Pain Medicine specialist at the Center for Interventional Pain & Spine. “More than two-thirds of the patients in this RCT achieved profound pain relief of at least 80% with DTM SCS therapy. These outcomes demonstrate that DTM SCS can provide more patients profound pain relief compared with conventional SCS at 12 months, which physicians should consider when selecting a neuromodulation therapy for their patients.”

“DTM SCS is based on a novel understanding of how neurons and glial cells contribute to chronic pain,” said Charlie Covert , vice president and general manager of the Pain Therapies business, part of the Restorative Therapies Group at Medtronic. “The 12-month data reported demonstrate the value of Medtronic’s continued focus on pursuing science-based approaches to improving human health and underscore our ability to integrate existing technologies with novel therapies like DTM SCS to improve the outcomes of people suffering from chronic pain.”

Go to Medtronic.com/DTMwebinar to register for a webinar on Tues. Oct. 20 at 12 p.m. CDT to learn more about the clinical trial results.

About the Trial
The data reported are from an RCT in which SCS patients were randomized to either the treatment or control arm, with 79 subjects implanted and followed over the course of 12 months. The study previously met its primary endpoint of noninferiority compared with conventional SCS at three months, and a prespecified secondary statistical test for superiority showing the difference between DTM SCS and conventional SCS as highly significant. Medtronic previously reported three-month data from the trial in January 2020 .

About DTM SCS Therapy
DTM SCS therapy is a new and proprietary spinal cord stimulation algorithm available to treat patients with chronic pain. It is delivered as a programming option via the Medtronic Intellis SCS platform. It is inspired by science and rooted in preclinical work prior to being proven in an RCT. The DTM waveform may engage a novel mechanism that modulates both neurons and glial cells, expanding the understanding of SCS mechanisms of action. Glial cells outnumber neurons in the spinal cord by 12:1 and their role in pain has been explored in research for more than 20 years. 2-4

About the Intellis SCS Platform
The Intellis SCS platform, indicated to aid in the management of chronic, intractable pain, offers the world’s smallest implantable neurostimulator. It is powered by proprietary Overdrive™ battery technology and was designed to overcome limitations with other SCS systems, optimized for a wide range of energy demands and provides effective long-term pain relief for patients. The neurostimulator also features SureScan™ MRI technology, allowing access to MRI anywhere in the body under certain conditions, and AdaptiveStim™ technology, which automatically adjusts stimulation based on the patient’s needs and preferences in different body positions to ensure the patient receives the right dose of stimulation at the right location.

Any forward-looking statements are subject to risks and uncertainties such as those described in Medtronic’s periodic reports on file with the Securities and Exchange Commission. Actual results may differ materially from anticipated results.