Medtronic plc today announced the release of outcomes in the first 100 patients treated with the OsteoCool™ Radiofrequency Ablation System in the OPuS One Clinical Study the largest, prospective study in RFA for bone metastases. The study, which is the most meaningful clinical data release for the OsteoCool™ technology to date, showed patients had significant and swift improvement in pain relief at just three …

– Medtronic plc (NYSE: MDT) today announced the release of outcomes in the first 100 patients treated with the OsteoCool™ Radiofrequency Ablation (RFA) System in the OPuS One Clinical Study (as referenced below) the largest, prospective study in RFA for bone metastases. The study, which is the most meaningful clinical data release for the OsteoCool™ technology to date, showed patients had significant and swift improvement in pain relief at just three days post-procedure and sustained improvements in pain and quality of life out to six months.  The results were published in the November edition of the Journal of Vascular and Interventional Radiology. 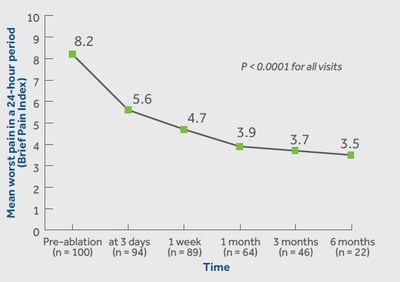 “The rapid pain relief was arguably the most important finding from the study. Also, given the significant improvement in quality of life we saw in such a sick patient population, we’re hopeful this meaningful data provides evidence to support moving this therapy up earlier in the cancer treatment paradigm.” Jason Levy , MD , Interventional radiologist, Northside Hospital System, Atlanta GA.

Cancer that has metastasized, or moved to surrounding bone, can affect quality of life, producing complications such as pain, fractures, and decreased mobility. 1 In addition to these symptoms, bone metastases can cause mood changes such as depression and anxiety. 2 Radiation therapy is traditionally considered the gold standard palliative treatment for patients with bone metastases. But 1 in 3 cancer patients are left with inadequate treatment or undermanaged pain control because treatments like opioids, chemotherapy, and radiation therapy did not work for them. 3 OsteoCool™ system can be used as an adjunctive treatment in this instance and it does not disrupt other systemic therapies.

“Our Interventional Pain Therapies business is inherently connected to the Medtronic Mission – which calls us to alleviate pain,” said Anu Codaty, vice president and general manager of Medtronic’s Interventional Pain Therapies business, which is reported as part of the Restorative Therapies Group. “With this data, we hope to bring awareness to a treatment option that can quickly help cancer patients suffering from debilitating pain.”

According to the study results, patients treated with RFA achieved significant improvements in pain relief (worst and average pain) at all visits. Results showed rapid pain improvement as early as 3 days and sustained out to 6 months.  Patients in the study also achieved significant improvements in pain interference and quality of life at all visits. Pain interference measures seven interference items (general activity, mood, walking ability, normal work, relations with other people, sleeping, and enjoyment of life).

The multicenter center study included a total of 218 patients at 16 centers in the United States , Europe , and Canada . Follow-up was completed on patients immediately post-RFA, 3 days, 1 week, and 1-, 3-, 6-, and 12-months post-procedure. The newly released data on pain, quality of life, medication, and safety included outcomes out to 6 months in the first 100 patients.

The OPuS One primary endpoint was achieved through these results – to demonstrate an improvement from baseline to 3 months post-RFA in worst pain score in the past 24 hours in subjects treated for metastatic lesions in only the thoracic and/or lumbar vertebral body(ies). Eighty-seven percent of patients had tumors involving the thoracolumbar spine and thirteen percent had tumors located in the pelvis and/or sacrum.

About the OsteoCool™ Radiofrequency Ablation System
The OsteoCool™ System is intended for palliative treatment in spinal procedures by ablation of metastatic malignant lesions in a vertebral body and for ablation of benign bone tumors such as osteoid osteoma. It is also intended for coagulation and ablation of tissue in bone during surgical procedures including palliation of pain associated with metastatic lesions involving bone in patients who have failed or are not candidates for standard therapy. The system is contraindicated for use in the cervical spine. Risks for the system include damage to surrounding tissue through iatrogenic injury as a consequence of electrosurgery, pulmonary embolism, and nerve injury including thermal injury, puncture of the spinal cord or nerve roots potentially resulting in radiculopathy, paresis, and paralysis.

Any forward-looking statements are subject to risks and uncertainties such as those described in Medtronic’s periodic reports on file with the Securities and Exchange Commission. Actual results may differ materially from anticipated results.