CanAlaska's Waterbury project covers three claims in the central eastern Athabasca region, southeast and northeast of the Cigar Lake uranium mine, and southwest of the Rabbit Lake uranium mill (Figure 1). Two of the project claims, East and South, are owned 100% by CanAlaska. The Company retains a NSR interest on the Waterbury West claim, which was sold to Cameco and its partner Orano in 2016. A detailed report on the properties is available on the Company's website at www.canalaska.com. 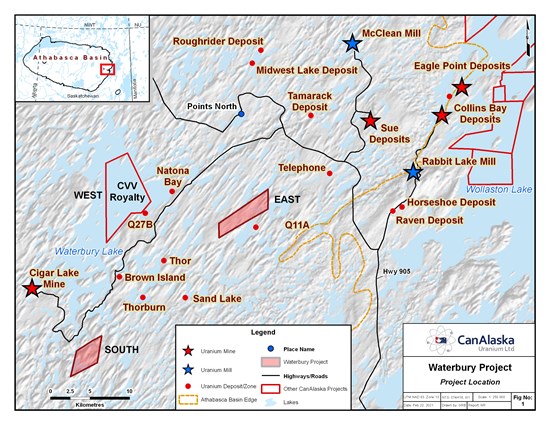 The Waterbury East and Waterbury South claims were staked by CanAlaska in 2005 targeting high-grade, Cigar Lake-style unconformity uranium mineralization. The East claim received initial drill testing in 2006 and 2007 but did not intersect the ideal target location at the unconformity. The South claim is close to the interpreted location of the regional Rabbit Lake - Collins Bay fault system, host to the Rabbit Lake, Collins Bay and Eagle Point orebodies. Depth to the unconformity ranges between 200 and 250 metres within the project areas. 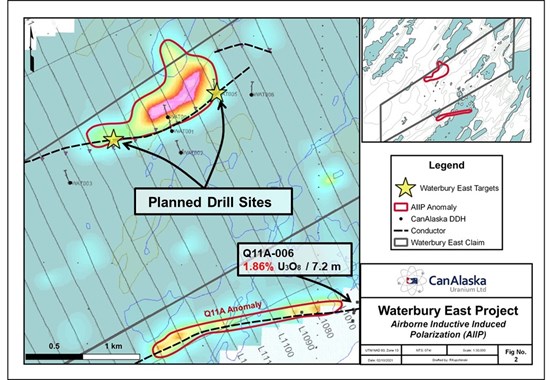 The most encouraging results to come out of the 2007 drill program on the East claim (Figure 2) were returned from drill hole WAT005 where 17 metres of basement-hosted uranium with secondary brick-red hydrothermal hematite alteration was encountered. WAT005 is interpreted to have undercut the unconformity target related to the drilled basement mineralization and alteration. Recent work has re-defined the location of the VTEM anomalies in relation to the 2006 and 2007 drilling, including definition of an Airborne Inductively Induced Polarization (AIIP) anomaly, providing new drill targets in the vicinity of the mineralized drill hole. The AIIP anomaly in the target area closely resembles the AIIP anomaly associated with known high-grade mineralization in the Q11A discovery area on the adjacent property (see Figure 2).

At the South Waterbury claim (Figure 3), historical drill hole (ROO-02-81) intercepted a 40 metre basement intersection of hematized and chloritized metapelites, the first 12 metres of which had clay alteration and contained 0.3 metre of 0.12% U3O8. These results indicate a fertile basement and unconformity uranium target zone associated with the conductor.

One kilometre to the northeast another drill hole completed by Cameco (SOD-253) was lost in a strongly faulted and altered zone above the unconformity. This drill hole intercepted sandstone with drusy quartz and sooty pyrite associated with fault gouge, blocky core and breccia. Based on these positive results, this work was followed up by CanAlaska with a DC-resistivity survey in the vicinity of drill hole SOD-253.  This survey revealed a distinct unconformity breach-style anomaly above the basement conductor associated with drill hole SOD-253 and extending for 1.5 kilometres to the northeast (Figure 3). These unconformity breaches are often associated with large basement faults that have been reactivated post-sandstone deposition. Large basement faults are necessary to form large unconformity uranium deposits like Cigar Lake. This area warrants immediate follow-up with drilling. 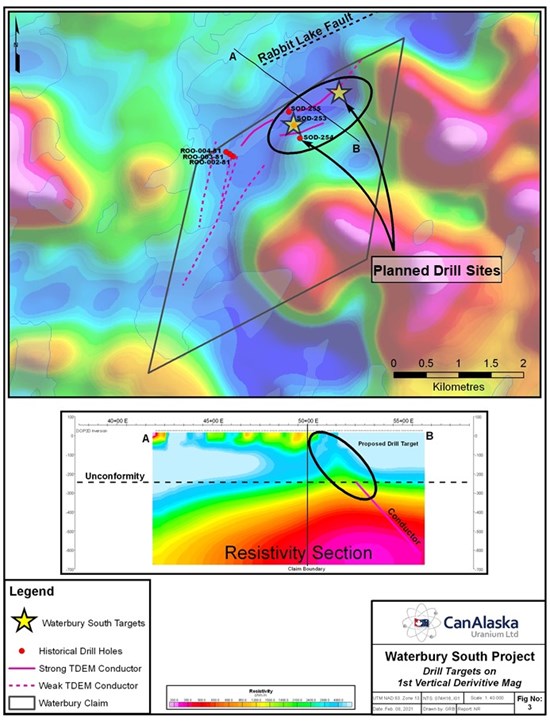 President Peter Dasler commented: "At Waterbury we see an opportunity to make a further uranium discovery in the eastern Athabasca, similar to other discoveries in the immediate area. The targets are at relatively shallow depths and show evidence of mineralization, hydrothermal alteration and halos of geochemical enrichment. This style of alteration and mineralization is usually associated with significant uranium deposits in the Athabasca Basin, so they present a very encouraging target at shallow depth."

Shareholders and investors are welcomed to participate at the Red Cloud Pre-PDAC Mining Showcase webinar, featuring Cory Belyk and Peter Dasler from CanAlaska on Wednesday March 3rd from 2:20-2.40 pm ET. Meetings can also be scheduled for Thursday March 4th from 12:00 pm - 2:30 pm ET. Register at https://www.redcloudfs.com/prepdac2021/.

To view the source version of this press release, please visit https://www.newsfilecorp.com/release/75636

Following a year that saw uranium rank among the best performing commodities, 2021 has seen the value of the energy fuel continue to rise.

Uranium started the year at US$29.63 and prices have trended higher over the last 11 months, pushing the nuclear fuel to a nine year high in September when prices hit an intraday high of US$50.76.

Production declines from 2020 closures aided in the price growth. However, a widespread push towards nuclear as a clean energy source has served as a primary catalyst to the value increase.

CanAlaska Uranium Ltd. (TSXV: CVV) (OTCQB: CVVUF) (FSE: DH7N) ("CanAlaska" or the "Company") is pleased to announce that compilation work by the Company's staff has identified uranium potential in three areas of the western Athabasca Basin and a total of 74,283 hectares have been staked (Figure 1).

In 2020, world uranium mine production came to 56,287 tonnes of U3O8. Kazakhstan was the top-producing country by far at 19,477 tonnes, followed by Australia and Namibia.

Together, those three nations accounted for over two-thirds of uranium mining, with Kazakhstan taking a 41 percent share. Additionally, a wide variety of uranium-mining companies contribute to the world's production.

But where in the world are the top uranium mines? While many of them are located in Kazakhstan, Canada and Australia, that's not the case for all of the largest uranium mines.

Elevate Uranium Ltd (ASX: EL8) ("Elevate" or "the Company") is pleased to announce that it has received binding commitments for a single tranche placement to raise $11.5 million (before costs) at $0.45 per share, utilising its placement capacity under ASX Listing Rule 7.1 ("Placement"). The Placement introduced a number of new, high quality institutional, sophisticated and professional investors, whilst also being well supported by existing significant shareholders of the Company.

Ways to Invest in Tantalum

How to Invest in Industrial Metals