iMetal Resources, Inc. (TSX.V:IMR) (OTC PINK:ADTFF) ("iMetal" or the "Company") is pleased to announce the results of the previously announced IP Survey at the Oakes Gold Project located in the Beardmore-Geraldton Greenstone Belt (BGGB) of Northern Ontario, northeast of Thunder Bay. The IP survey has successfully confirmed the Company's premise that the gold-bearing HG Shear Zone is a significant structure shown to extend over 2km in strike length as evident from the chargeability anomaly shown in Figure 1 below

The IP survey was conductedto the east and west of the historic (2010) grid and has confirmed the extension of the HG shear from about 800 metres to 2300 metres, remaining open in both directions. A second previously unknown parallel structure located at the bottom of the grid represents a second potential gold bearing shear zone (Crib Target). The chargeability map also indicates a potential E-W structure lying between the HG and Crib targets. This new parallel anomaly is interpreted to be an additional shear zone and is important because it appears to project into the parallel structure on the western end of the grid and into the HG Shear Zone just to the east of the grid. The increased chargeability noted at these two locations enhances these junction areas as shear junctions represent excellent exploration targets for gold mineralization. 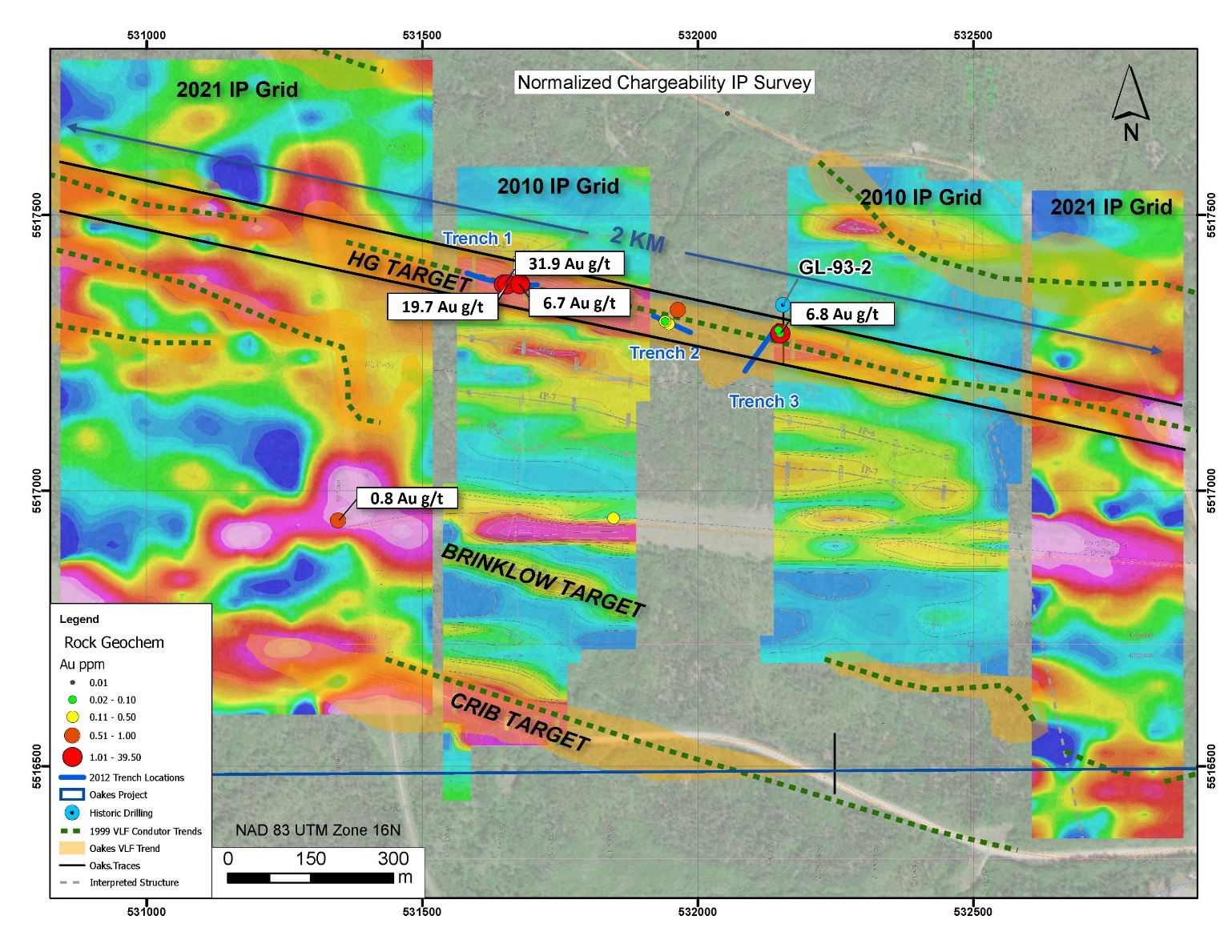 The Company plans to ground truth these new target areas, concurrent with a proposed drill program along the main HG Shear Zone.

The Oakes Project is an orogenic, shear hosted gold project and is an integral part of the BGGB property package which the Company proposes to acquire from Riverside Resources Inc. (See news release of February 10, 2021). The Oakes Project is 5,544 hectares and hosts several gold bearing shear zones, including the HG shear zone. Riverside channel sampling in 2019 at the HG shear zone returned values of 31.9 g/t gold, 19.7 g/t gold and 6.9 g/t gold over 0.5 to 1.0 m intervals.

"The IP Survey exceeded our expectations in confirming and delineating the HG Shear Zone, as well as defining two parallel structures, the Crib Target and the Bricklow Target," commented iMetal President & CEO Saf Dhillon. "We view the pending acquisition of Oakes as an important project in the growth of iMetal as it provides shareholders with a new significant gold asset in the rapidly developing Beardmore-Geraldton Greenstone Belt," he continued.

The Oakes Gold Project is currently controlled by Riverside Resources Inc., and exploration work conducted on the Project is overseen by Riverside. As previously disclosed, the Company proposes to acquire the Oakes Project as part of a larger package of properties located in Northern Ontario. Completion of the acquisition remains subject to the approval of the TSX Venture Exchange, available financing and the satisfaction of customary closing conditions. Readers are cautioned that there is no guarantee that the outstanding conditions will be satisfied and that the Company will acquire an interest in the Oakes Project.

A Canadian based junior exploration company focused on the exploration and development of its portfolio of resource properties in Ontario and Quebec. iMetal is focused on advancing its Gowganda West Project that borders the Juby Project, an advanced exploration-stage gold project located within the Shining Tree area in the southern part of the Abitibi greenstone belt about 100 km south-southeast of the Timmins gold camp.

The scientific and technical information contained in this news release has been reviewed and approved by R. Tim Henneberry, P.Geo. (British Columbia), a director of iMetal, and a "qualified person" as defined in National Instrument 43-101.

Breaker Resources NL (ASX: BRB; the Company or Breaker) is pleased to advise of the results from the next 10 holes or wedges drilled as part of its resource development infill program on the primary Northern Flat Lodes beneath the Bombora Prospect at its Lake Roe Gold Project.
Keep reading...Show less
Charlotte McLeod

"(These are) only guidelines," he told the Investing News Network. "They're not hard rules you absolutely have to follow. Just keep that in mind. But they are guidelines that especially newer investors can get a good start with."

Yaxley's three rules are as follows:

Newmont Corporation (NYSE: NEM, TSX: NGT) today announced that it will release its 2023 guidance and longer-term outlook, along with full year and fourth quarter 2022 operations and financial results, on Thursday, February 23, 2023 . Newmont will hold a conference call at 10 a.m. Eastern Standard Time (8:00 a.m. Mountain Standard Time) the same day, which will be available on the Company's website. Positioning guidance alongside the fourth quarter results going forward aligns with industry timing, and will allow for more relevant macro-economic conditions to be considered for the upcoming year.

Newmont is the world's leading gold company and a producer of copper, silver, zinc and lead. The Company's world-class portfolio of assets, prospects and talent is anchored in favorable mining jurisdictions in North America, South America, Australia and Africa. Newmont is the only gold producer listed in the S&P 500 Index and is widely recognized for its principled environmental, social and governance practices. The Company is an industry leader in value creation, supported by robust safety standards, superior execution and technical expertise. Newmont was founded in 1921 and has been publicly traded since 1925.

4 Platinum Uses for Investors to Know