VANCOUVER, British Columbia – TheNewswire – February 3 rd , 2021  – Visionary Gold Corp (” Visionary ” or the ” Company “) (TSXV:VIZ) is pleased to provide additional results from its 2020 exploration program at the past producing Wolf Gold Project in Fremont County, Wyoming. Throughout 2020, Visionary assembled through leasing and staking, a 25.02km 2 land position within the Miners Delight Formation, in Fremont County, Wyoming, an historically prolific gold rich area within the South Pass Greenstone Belt of Wyoming. The initial focus has been on characterising the known high-grade gold mineralisation at the past producing Wolf Mine and identifying drill targets along the Wolf Shear Structure. The Wolf Shear is a chlorite – hematite altered shear zone that has been mapped at surface for over 1,000m with a surface expression up to 50m wide.

Visionary CEO Wes Adams comments: “The 2020 exploration season on the Wolf Gold Project yielded very positive results confirming the existence of a high-grade zone of gold mineralisation with considerable width within and around the past producing Wolf Mine. It is also very encouraging that there were several notable assays from samples taken over 500m northeast along the strike of the Wolf shear and also along an interpreted parallel structure 500m north of the Wolf Mine.  With more sampling, the target area at the Wolf Gold Project appears to be getting bigger, which is certainly what we want to see, as we advance toward drilling in 2021.”

The previously reported (news release dated Dec.17, 2020) soil grid sampling on the Wolf and Miz prospects highlighted a 2.5km geochemical anomaly over the Wolf Shear structure and interpreted parallel structures. In addition to previously released rock sample results (news release dated Dec.14, 2020) additional chip channel and rock samples are described in the Highlights section and shown in Figure 1. Visionary is also continuing to evaluate the induced polarization surveys completed on the Wolf and Miz prospects and is building an exploration model for targeting additional high-grade gold mineralisation in the district. A summary of rock and soil sampling work conducted in 2020 is shown in the table below.

The induced polarisation (IP) geophysical surveying was used to characterise the past producing  Wolf Mine. Given the alteration, veining and inferred sulphide content, it was expected that a coincident relative moderate resistivity measurement along with a relative moderate to strong IP response could represent a potential target in the shear zone. Results from the evaluation survey, using both 25m spaced and 50m spaced dipoles, show that an apparent resistivity break and chargeability high may characterise known mineralised zones and are interpreted to reflect areas of silicification and potentially, weak sulphide mineralisation at depth below the oxidized area of known gold mineralisation at the Wolf Mine. The observed geophysical responses, once confirmed by drilling, may provide high potential targets in the sheared and altered greywackes both in the Wolf Shear Structure and other similar structures in the district.

Visionary is in the process of permitting 3500m of drilling on it’s patented claims to evaluate potential extensions of known surface gold mineralisation and determine the cause of the IP anomalies and surface bedrock gold mineralisation. The first phase of drilling will consist of 1500m and will be expanded to 3500m based on successful results. In addition to testing mineralisation along strike and at depth, the drilling will also help Visionary understand the structural controls of mineralisation, which will help build a model for regional exploration success. Visionary will continue to evaluate other properties of interest in the area and plans to ramp up systematic exploration of the Miner’s Delight Basin in 2021 by expanding its sampling, mapping and surveying programmes in addition to completing its maiden drill program at the Wolf.

Dump samples and outcrop samples are selective in nature whereas the chip channel and rock chip samples were collected on a defined width as semi-representative material across geological features. Chip samples were collected at three foot intervals (approximately one metre intervals). No certified reference material was used in the sample stream during this initial field program and the Company has relied on the respective laboratory’s re-analysis procedure which included pulp duplicates and the use of laboratory standards. Field programs subsequent to this 2020 program will have in place an internal QA/QC procedure and sampling protocols that match industry best practices. Laboratories used for the analyses of the samples included Paragon Geochemical Ltd. of Sparks, NV using codes Au-OES30 and Au_GRAV30 for over-limits and 35AR-OES for multi-element analysis (main field program, approximately 30% of the samples; contracted laboratory for 2020 field program); American Analytical Services of Osborn, ID using code FA-Ag/Au (reconnaissance samples, approximately 40% of the submitted samples), and Skyline Assayers and Laboratories of Tucson, AZ using codes FA-01-50g and TE-2 for multi-element analysis (property due diligence samples, approximately 30% of the submitted samples).

All scientific and technical information contained within this press release was prepared under the supervision of Darren Lindsay, P.Geo. (EGBC), a Qualified Person as defined by NI 43-101.  Mr. Lindsay is a Director of the Company.

This news release contains “forward-looking statements” within the meaning of Canadian securities legislation. These include, without limitation, statements with respect to the advancement of the Wolf Gold Project, drilling plans for 2021, plans to evaluate other properties of interest in the area and plans to ramp up systematic exploration of the Miner’s Delight Basin in 2021. Forward-looking statements are necessarily based on a number of estimates and assumptions that, while considered reasonable, are subject to known and unknown risks, uncertainties and other factors which may cause actual results and future events to differ materially from those expressed or implied by such forward-looking statements. Such factors include, but are not limited to capital and operating costs varying significantly from management estimates; the preliminary nature of metallurgical test results; delays in obtaining or failures to obtain required governmental, environmental or other project approvals; uncertainties relating to the availability and costs of financing needed in the future; inflation; fluctuations in commodity prices; delays in the development of projects; and the other risks involved in the mineral exploration and development industry generally. Although the Company believes that the assumptions and  factors used in preparing the forward-looking statements are reasonable, undue reliance should not be placed on these statements, which only apply as of the date of this news release, and no assurance can be given that such events will occur in the disclosed time frames or at all. Except where required by law, Visionary disclaims any intention or obligation to update or revise any forward-looking statement, whether as a result of new information, future events, or otherwise.

Figure 1: Sample locations along and adjacent to the historical Wolf Mine and shear zone. 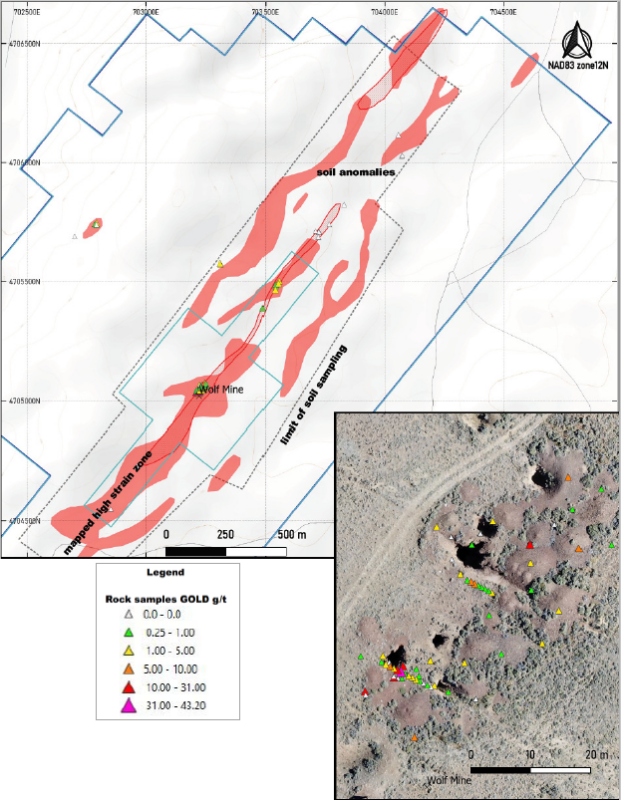 Visionary Gold: Unlocking Value in the Under-Explored Past Producing Gold Belts of Wyoming