Nextleaf Solutions Ltd. (CSE: OILS) (OTCQB: OILFF) ("Nextleaf", "OILS", or the "Company"), a federally regulated cannabis oil producer that owns one of the largest portfolios of U.S. patents for the extraction and distillation of cannabinoids, is pleased to announce that the United States Patent and Trademark Office has granted the Company a patent pertaining to a novel process for acetylating Cannabigerol ("CBG"), and subsequent refinement of CBG-O-Acetate.

Acetylation is an organic esterification reaction, which often utilizes acetic acid. Examples of acetylated pharmaceuticals include Aspirin (acetylsalicylic acid) and diacetylmorphine. The Company was previously granted U.S. and Canadian patents for the acetylation of both CBD and THC, and subsequent refinement of CBD-O-Acetate and THC-O-Acetate. THC-O-Acetate acts as a metabolic prodrug for THC itself, and chemically works the same way that diacetylmorphine does as a metabolic prodrug for morphine.

The Company's latest U.S. patent describes its proprietary production process of modifying CBG found in cannabis distillate into a prodrug, referred to as CBG-O-Acetate. As CBG-O-Acetate is metabolized in the body, the acetate group is removed, allowing the CBG to interact with the cannabinoid receptors.

"CBG is often referred to as the mother cannabinoid as so many other cannabinoids can be derived from its acidic form," said patent author and Nextleaf Solutions Chief Technology Officer Ryan Ko. "This issuance provides further validation for our specialty molecules development roadmap."

The Company believes the CBG-derived prodrug produced under its patented process may hold significant potential as a therapeutic product based on research that CBG may be effective in the treatment of inflammation, pain, and nausea. Peer-reviewed research also suggests that CBG in higher doses may be beneficial in treating conditions such as Crohn's disease1 and cancer2.

Nextleaf owns 16 issued U.S. patents and over 80 issued patents globally for the extraction, purification, and delivery of cannabinoids - representing the third largest patent portfolio amongst all cannabis companies after Canopy Growth and GW Pharma. 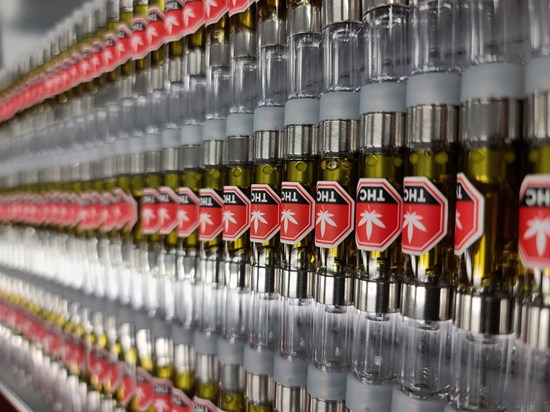 "We are thrilled to enhance our U.S. patent portfolio with this novel production process, that along with our Health Canada licenses, allows Nextleaf to develop and produce truly differentiated cannabinoid-based products through our Specialty Molecules Division," said Nextleaf Solutions co-founder and Chief Executive Officer Paul Pedersen. "To the best of our knowledge, Nextleaf is the first company in the world - publicly traded or private - to be issued patents for the production of CBG-O-Acetate, a specialty molecule not legally available anywhere in the world."

The purpose of the Specialty Molecules Division is to leverage Nextleaf's existing intellectual property ("IP") and delivery technology to develop IP-protected therapeutic products from novel molecules that may provide a therapeutic alternative to opioid-based medications.

Nextleaf is a federally regulated producer of cannabis oil that owns one of the largest portfolios of U.S. patents for the extraction and distillation of cannabinoids. Nextleaf supplies cannabis oils to its wholesale customers and distributes consumer products under its award-winning prohibition-era brand, Glacial Gold™. Nextleaf's proprietary closed-loop automated extraction plant in Metro Vancouver has a design capacity to process 600 kilos of dried cannabis into oil per day. Nextleaf is developing delivery technology through its Health Canada Research Licence with sensory evaluation of cannabis via human testing. The Company owns 16 U.S. patents and has been issued over 80 patents globally.

Nextleaf Solutions trades as OILS on the Canadian Securities Exchange, OILFF on the OTCQB Market in the United States, and L0MA on the Frankfurt Stock Exchange.

On behalf of the Board of Directors of the Company,
Paul Pedersen, CEO

To view the source version of this press release, please visit https://www.newsfilecorp.com/release/96599

In a surprising move, enterprise software firm Akerna (NASDAQ:KERN), which has developed programs to aid the cannabis industry, will merge with a Bitcoin miner and sell its software business to POSaBIT Systems (CSE:PBIT,OTCQX:POSAF).

Also this week, a Canadian cannabis operator received a warning from a leading exchange for its low trading numbers.

Keep reading to find out more cannabis highlights from the past five days.

Curaleaf Holdings, Inc. (CSE: CURA) (OTCQX: CURLF) ("Curaleaf" or the "Company"), a leading international provider of consumer cannabis products, today announced that it has been approved by the Connecticut Department of Consumer Protection to commence adult-use sales at its Stamford, Connecticut location, beginning Saturday, January 28 at 10:00 a.m. Curaleaf Stamford, located at 814 East Main St, is the Company's first dispensary in the state to open its doors to adult-use customers.

Trulieve Cannabis Corp. (CSE: TRUL )(OTCQX: TCNNF ) ("Trulieve" or "the Company"), a leading and top-performing cannabis company in the United States today announced the opening of a new medical dispensary in Winter Haven, Florida . Located at 6000 Cypress Gardens Blvd., the doors will open at 9 a.m. on Saturday, January 28 with ongoing regular hours of 9 a.m. 9 p.m. from Monday through Saturday and 10 a.m. 8 p.m. on Sunday .

Curaleaf Announces Closure of Operations in California, Colorado and Oregon

Aurora Cannabis Inc. (the "Company" or "Aurora") (NASDAQ: ACB) (TSX: ACB), the Canadian company defining the future of cannabinoids worldwide, announced today that it has scheduled a conference call to discuss the results for its second quarter fiscal year 2023 on Thursday, February 9, 2023 at 5:00 p.m. Eastern Time | 3:00 p.m. Mountain Time . The Company will report its financial results for the second quarter fiscal year 2023 after the close of markets that same day.

Miguel Martin , Chief Executive Officer, and Glen Ibbott , Chief Financial Officer, will host the conference call and question and answer period. This weblink has also been posted to the Company's "Investor Info" link at https://investor.auroramj.com/ under "News & Events".

Aurora is a global leader in the cannabis industry, serving both the medical and consumer markets. Headquartered in Edmonton, Alberta , Aurora is a pioneer in global cannabis, dedicated to helping people improve their lives. The Company's adult-use brand portfolio includes Aurora Drift , San Rafael '71 , Daily Special , Whistler , Being and Greybeard , as well as CBD brands, Reliva and KG7 . Medical cannabis brands include MedReleaf, CanniMed, Aurora and Whistler Medical Marijuana Co. Aurora also has a controlling interest in Bevo Farms , North America's leading supplier of propagated agricultural plants. Driven by science and innovation, and with a focus on high-quality cannabis products, Aurora's brands continue to break through as industry leaders in the medical, performance, wellness and adult recreational markets wherever they are launched. Learn more at www.auroramj.com and follow us on Twitter and LinkedIn .

Aurora's common shares trade on the NASDAQ and TSX under the symbol "ACB".

These forward-looking statements are only predictions. Forward looking information or statements contained in this news release have been developed based on assumptions management considers to be reasonable. Material factors or assumptions involved in developing forward-looking statements include, without limitation, publicly available information from governmental sources as well as from market research and industry analysis and on assumptions based on data and knowledge of this industry which the Company believes to be reasonable. Forward-looking statements are subject to a variety of risks, uncertainties and other factors that management believes to be relevant and reasonable in the circumstances could cause actual events, results, level of activity, performance, prospects, opportunities or achievements to differ materially from those projected in the forward-looking statements. These risks include, but are not limited to, the ability to retain key personnel, the ability to continue investing in infrastructure to support growth, the ability to obtain financing on acceptable terms, the continued quality of our products, customer experience and retention, the development of third party government and non-government consumer sales channels, management's estimates of consumer demand in Canada and in jurisdictions where the Company exports, expectations of future results and expenses, the risk of successful integration of acquired business and operations, management's estimation that SG&A will grow only in proportion of revenue growth, the ability to expand and maintain distribution capabilities, the impact of competition, the general impact of financial market conditions, the yield from cannabis growing operations, product demand, changes in prices of required commodities, competition, and the possibility for changes in laws, rules, and regulations in the industry, epidemics, pandemics or other public health crises, including the current outbreak of COVID-19, and other risks, uncertainties and factors set out under the heading "Risk Factors" in the Company's annual information form dated September 20, 2022 (the "AIF") and filed with Canadian securities regulators available on the Company's issuer profile on SEDAR at www.sedar.com and filed with and available on the SEC's website at www.sec.gov . The Company cautions that the list of risks, uncertainties and other factors described in the AIF is not exhaustive and other factors could also adversely affect its results. Readers are urged to consider the risks, uncertainties and assumptions carefully in evaluating the forward-looking statements and are cautioned not to place undue reliance on such information. The Company is under no obligation, and expressly disclaims any intention or obligation, to update or revise any forward-looking statements, whether as a result of new information, future events or otherwise, except as expressly required by applicable securities law.

Cresco Labs (CSE:CL) (OTCQX:CRLBF) ("Cresco" or "the Company), a vertically integrated multistate cannabis operator and the No. 1 U.S. wholesaler of branded products, today announced the opening of a new Sunnyside dispensary in Lutz, Florida. Sunnyside Lutz joins its sister locations in Tampa, Clearwater and St. Petersburgh in serving patients residing around the Tampa Bay area. The new store is Cresco Labs' 22 nd dispensary in Florida and 56 th dispensary nationwide.