Graph Blockchain Inc. is pleased to announce that its wholly owned subsidiary New World Inc., the Company’s newest acquisition will be adding music non-fungible tokens to its platform when it launches in September 2021.In addition, the Company is pleased to announce it has signed Toronto musician Karl Wolf to create exclusive NFTs on New World Inc. platform.Following the recent release of his new album “2AM Vibes” …

Graph Blockchain Inc. (CSE: GBLC) (OTC Pink: REGRF) (FSE: RT5A) (“Graph” or the “Company”) is pleased to announce that its wholly owned subsidiary New World Inc., the Company’s newest acquisition will be adding music non-fungible tokens (“NFTs”) to its platform when it launches in September 2021.

In addition, the Company is pleased to announce it has signed Toronto musician Karl Wolf to create exclusive NFTs on New World Inc. platform.

Following the recent release of his new album “2AM Vibes” featuring the hit single “Get Away” Karl Wolf plans to expand his talents to excite the senses of his audience through the New World Inc. platform. His NFTs will include his music in collaboration with various digital NFT art.

As a platform, New World leaves the creativity of NFT exhibition to its contributors and collaborators. Wolf is excited to creatively utilise the capabilities of the New World Inc. platform to create unique experiences with his music.

Karl Wolf is a Lebanese-Canadian musician raised in Dubai and based in Toronto. He has been a singer, songwriter, and producer since 2001, part of the pop duo SKY, then released his first solo album Face Behind the Face in 2006 which was nominated at the Canadian JUNO Awards for Best R&B Soul Recording, followed by a second album Bite the Bullet in 2007 which included Karl’s international hit single “Africa” which sold over 1 million units worldwide and spent 8 weeks at #2 on the Billboard CANADIAN HOT 100. “Africa” gained quadruple-platinum status in Canada, reached #1 on iTunes, #1 on AC Radio, #1 on Hot AC Radio and as a result Karl had won a 2008 MTV Europe Music Award.

Karl had followed up this success by releasing chart-topping singles and gold records such as “Carrera”, “Yalla Habibi”, “Mash It Up” feat with hip hop group Three 6 Mafia, “Juicy J” and “Ghetto Love” feat with rapper Kardinal Offishall, which can be found on Wolf’s 2012 album Finally Free. Going back to his R&B roots for his album “Stereotype”, he worked with megastar producer Timbaland on his song “Magic Hotel” amongst some other prominent artists such as Fatman Scoop as well as Canada’s own Classified. In 2015, Karl co-wrote OMI’s “HULA HOOP”. 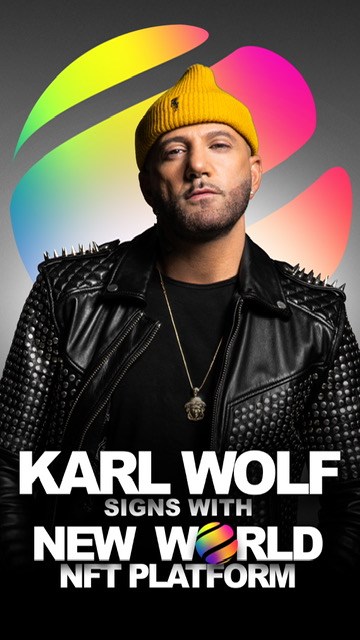 This was followed by the signing of a worldwide publishing deal with BMG Publishing through Zach Katz. 2016 had proven to be another successful year for KW with the release of his EP entitled “The Export Vol. 1”, which included the hit single, “Amateur at Love” feat. “Kardinal Offishall”, the single landed in the top 10 on the iHeart Radio Charts and was also certified Gold! In addition, Karl recently teamed up with 3-time Grammy Award winner Nelly and renowned producer of the worldwide hit single “Thunder” by Imagine Dragons, Jayson Dezuzio, to create “Way Low”, which was part of the recently released EP: Blacklight (The Export Vol 2). Since then, Karl has won several awards, one of them being the SOCAN award for ‘Best Pop Song’ for Bulow’s debut smash hit “Not A Love Song”.

Karl Wolf is back, after several writing projects and successes, with a new single of his own called “Get Away” as well as the release of his new album “2AM Vibes” on April 16th, 2021.

Karl’s label, Lone Wolf Records, owns the masters and rights of this project for the world including Canada and the United States, planning a promotional campaign in association with Factor.

New World is an augmented reality art focused NFT company that allows creators, musicians, and celebrities to have access to an NFT distribution canvas to create and sell digital art. By selling digital art, artists are able to reach a broader market (both geographically and demographically), and as a result of the blockchain, continue to benefit financially through economic participation in future sales. New World has built this platform and has already signed such notable artists as Diogo Snow, who has produced numerous pieces for celebrity clients including Drake, and Fetty Wap, an American rapper, singer and songwriter who has over 6.5 million Instagram Followers, as well as many others. Additional information on New World is available at http://newworldinc.io.

Graph Blockchain provides shareholders with exposure to various areas of Decentralized Finance (DeFI). Focusing on altcoins through its wholly owned subsidiaries Babbage Mining Corp., a Proof of Stake (“POS”) miner, and Beyond the Moon Inc. an IDO focused company, Graph gives investors exposure to the vast emerging market of cryptocurrencies with the significant technological disruption and potential gains altcoins represent. In addition, through its investment in New World, Graph is providing its shareholders with exposure to rapidly growing and emerging NFT market.

Generally, such forward-looking information or forward-looking statements can be identified by the use of forward-looking terminology such as “plans”, “expects” or “does not expect”, “is expected”, “budget”, “scheduled”, “estimates”, “forecasts”, “intends”, “anticipates” or “does not anticipate”, or “believes”, or variations of such words and phrases or may contain statements that certain actions, events or results “may”, “could”, “would”, “might” or “will be taken”, “will continue”, “will occur” or “will be achieved”. The forward-looking information and forward- looking statements contained herein include, but are not limited to, statements regarding: the continued growth of the art-focused NFT market. Forward-looking information in this news release are based on certain assumptions and expected future events. These statements involve known and unknown risks, uncertainties and other factors, which may cause actual results, performance or achievements to differ materially from those expressed or implied by such statements, including but not limited to: the potential inability of the Company to continue as a going concern; the potential inability of New World to continue as a going concern; the risks associated with the blockchain and NFT industry in general; increased competition in the art-focused NFT market; the potential future unviability of the NFT market in general, and the art-focused NFT market in specific. Readers are cautioned that the foregoing list is not exhaustive. Readers are further cautioned not to place undue reliance on forward-looking statements, as there can be no assurance that the plans, intentions, or expectations upon which they are placed will occur. Such information, although considered reasonable by management at the time of preparation, may prove to be incorrect and actual results may differ materially from those anticipated.

Forward-looking statements contained in this news release are expressly qualified by this cautionary statement and reflect the Company’s expectations as of the date hereof and are subject to change thereafter. The Company undertakes no obligation to update or revise any forward-looking statements, whether as a result of new information, estimates or opinions, future events or results or otherwise or to explain any material difference between subsequent actual events and such forward-looking information, except as required by applicable law.

The CSE does not accept responsibility for the adequacy or accuracy of this release.

To view the source version of this press release, please visit https://www.newsfilecorp.com/release/91497