iMetal Resources Inc. (TSXV:IMR)(OTC PINK:ADTFF)(FRA:A7V2) ("iMetal" or the "Company") is pleased to announce that it has received the approval of the TSX Venture Exchange (the "Exchange") for the option to acquire 100% of the 665 hectare Kerrs Gold Deposit, located 90 kilometres east-northeast of Timmins, Ontario, in the Abitibi Greenstone Gold Belt

The Kerrs Gold Deposit is comprised of a series of gold-bearing pyritized quartz vein replacement breccias enveloped by quartz fuchsite carbonate vein breccias averaging 10 metres in thickness. The deposit hosts a historical resource estimate of 7,041,460 tonnes grading 1.71 g/t gold yielding 386,467 ounces at a 0.5 g/t gold cut-off. Drilling subsequent to the historic estimate appears to have extended the mineralized zone along strike and down dip.

"The Kerrs Gold Deposit is the perfect complement to Gowganda West, giving iMetal multiple highly prospective projects in the prolific producing Abitibi Greenstone Gold Belt. The Company's focus remains on closing its up-sized financing to fund sufficient diamond drilling to both bring the Kerrs 386,467 ounce historic resource current and build upon it, as well as undertake follow-up drilling at Gowganda West," commented iMetal CEO Saf Dhillon. "The Company has come a long way under the new management team, continuing to build value for iMetal shareholders and we look forward to a successful 2022," he concluded.

The Kerrs Gold historical resources estimate was disclosed in "NI 43-101 Resource Estimation on the Kerrs Gold Deposit, Matheson, Ontario" prepared for Sheltered Oak Resources Inc. by Garth Kirkham, P. Geo of Kirkham Geosystems Ltd., and dated June 10, 2011. The Company considers the resource estimate relevant as it will drive further exploration by the Company and reliable, as it was completed by a competent Qualified Person to the standards of the day. The resource estimation methods and parameters were as follows: 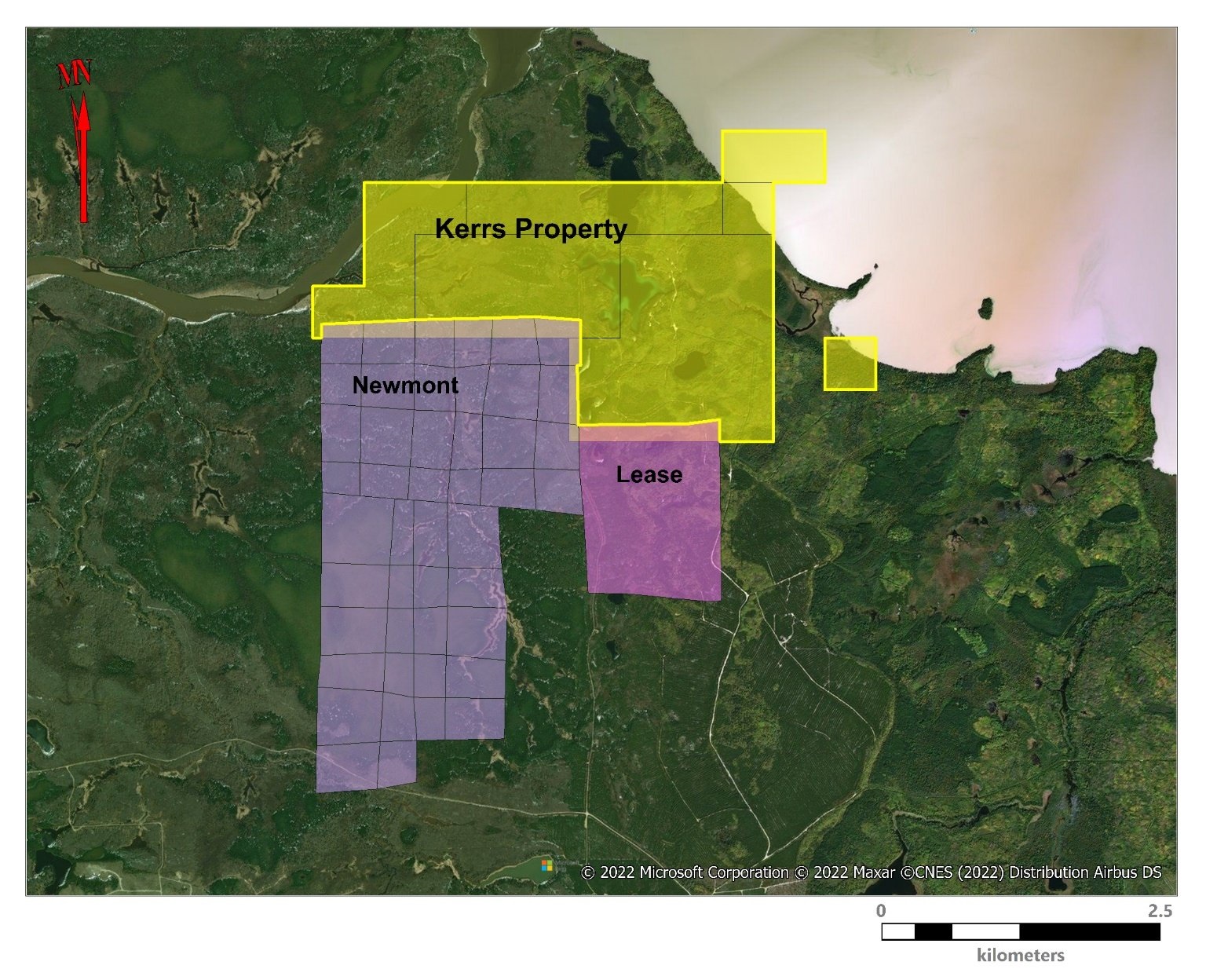 The Deposit was discovered by Noranda in the late 1970's early 1980's by following glacial dispersion trains up-ice to the source. Drilling continued into the late 1980's, with further drilling in the early to late-2000's and early 2011's. The drilling database was used to calculate the 2011 historic resource estimate, with further drilling completed subsequent to the release of the estimate. The Kerrs Gold Deposit consists of a series of gold-bearing pyritized quartz vein replacement breccias enveloped by quartz fuchsite carbonate vein breccias averaging approximately 10 metres and alteration envelopes varying up to 40 metres in thickness. Gold is directly related to pyrite content which ranges to 10% and is commonly found as disseminations and crystal aggregates in the sheeted, quartz vein replacement breccias. These breccias, averaging 31% quartz, exhibit reasonable correlation conforming to volcano-stratigraphic contacts as well as moderate to good continuity in grade correlations at the lower and upper boundaries of the vein breccia and alteration envelope assemblages.

The Kerrs Gold Deposit is stratabound, occurring at the contact of a thick, mafic pillow flow sequence overlying an ultramafic, magnetite-rich flow sequence. Quartz feldspar porphyry sills are spatially located above and below the breccia zones. This stratigraphy is synclinally folded with the deposit lying 350 m to 425 m below surface. Drilling has traced the main zone 800 metres and remains open in both directions and at depth.

iMetal entered into a purchase option agreement (the "Option Agreement"), dated January 24th, 2022, with Gravel Ridge Resources Ltd. and 1544230 Ontario Inc. (collectively, the "Vendors") pursuant to which was granted the right to acquire the Kerrs Gold Deposit.

To acquire the Deposit, the Company is required to issue 3,500,000 common shares (the "Consideration Shares") and complete a series of four cash payments totaling $210,000 to the Vendors as follows:

Following completion of the above cash payments and share issuances, the Company will acquire the Deposit and will grant to the Vendors a three percent royalty (the "Royalty") on net smelter returns from the Deposit. The Company may acquire two percent of the Royalty from the Vendors at any time by completing a one-time cash payment of $2,000,000.

The Company is at arms-length from each of the Vendors. No finders' fees or commissions are payable in connection with the Option Agreement. The Consideration Shares are subject to a statutory hold period until August 2, 2022, in accordance with applicable securities laws.

The scientific and technical information contained in this news release has been reviewed and approved by R. Tim Henneberry, P.Geo (British Columbia), a director of iMetal and a qualified person as defined in National Instrument 43-101.

A Canadian based junior exploration company focused on the exploration and development of its portfolio of resource properties in Ontario and Quebec. iMetal is focused on advancing its Gowganda West Project that borders the Juby Project, an advanced exploration-stage gold project located within the Shining Tree Camp area in the southern part of the Abitibi Greenstone Gold Belt about 100 km south-southeast of the Timmins Gold Camp.

iMetal Resources Inc. (TSXV:IMR)(OTC PINK:ADTFF)(FRANKFURT:A7V2) ("iMetal" or the "Company") is pleased to announce the completion of a drone magnetics survey at its 220-hectare Ghost Mountain property, located 42 kilometres northeast of Kirkland Lake, Ontario, in the Abitibi Greenstone Gold Belt

"The recent successes at Agnico Eagle's Holt and Holloway Mine, 5 kilometres east of the Ghost Mountain property necessitates a closer look at Ghost Mountain. The Drone mag survey was the first step generating exploration targets. Upon receipt of the final report from Abitibi Geophysics, we will dispatch field crews to ground truth anomalies and prospect the ground for gold mineralization targets," commented iMetal President & CEO Saf Dhillon.

Due to Investor Demand iMetal Increases Size of Private Placement

iMetal Resources Inc. (TSXV:IMR) (OTC PINK:ADTFF) (FRA:A7V2) ("iMetal" or the "Company") announces that as a result of market interest it has elected to increase the size of its previously announced non-brokered private placement (the "Placement"). The Company will continue to offer up to 16,666,667 units (each, a "Unit") at a price of $0.12 per Unit for gross proceeds of up to $2,000,000. Each "Unit" will consist of one common share of the Company and one common share purchase warrant exercisable to acquire an additional common share at a price of $0.20 for a period of twenty-four (24) months (each, a "Warrant

The Company also announces that it will conduct a portion of the placement through issuance of units on a flow-through basis (each, an "FT Unit") at a price of $0.15 per FT Unit. Each "FT Unit" will consist of one common share (each, an "FT Share") of the Company and one Warrant. The FT Shares will qualify as "flow-through shares" within the meaning of subsection 66(15) of the Income Tax Act (Canada).

iMetal Resources, Inc. (TSXV:IMR)(OTC PINK:ADTFF)(FRANKFURT:A7V2) ("iMetal" or the "Company") announces that effective at the close of business on January 13, 2022, it will consolidate its common share capital on a five-for-one basis (the "Consolidation"). Effective at the opening of markets on January 14, 2022, the common shares of the Company will commence trading on a post-Consolidation basis under the existing ticker symbol "IMR

iMetal Resources, Inc. (TSXV:IMR)(OTC PINK:ADTFF)(FRANKFURT:A7V2) ("iMetal" or the "Company") is pleased to announce it has completed a field review of the 2021 excavator trenching program to correlate the assay results with the exposed geology, ground and airborne geophysics and 2019 drilling at its flagship Gowganda West Gold Property, in the Shining Tree District of northern Ontario. The technical team is now firming up the geological model in advance of a Q1 2022 drill program

"We continue to reap the benefits of our continuing joint efforts with the Riverside technical team as we ramp up our focus on the Gowganda West project," commented CEO Saf Dhillon. "The combined team continues to work with the historic and 2021 exploration data to define targets for a proposed Q1 2022 drilling program," he continued.