Vanstar Mining Resources Inc. (TSXV: VSR) (OTCQX: VMNGF) (FSE: 1V8) ("Vanstar", or the "Company") is pleased to provide a review of 2021 and upcoming plans for 2022. 2021 began with new leadership in the appointment of JC St-Amour as President and CEO, on January 11, 2021. His experience and knowledge helped to strengthen our relationship with project partner IAMGOLD. 2021 was an exciting year of exploration that saw infill and expansion drilling at Nelligan that has significant implications for adding gold ounces.

In 2021, the Company was added to the OTCQX market to help increase the US investor shareholder base. An awareness campaign was launched that included several interviews, investor events throughout Quebec, and an increased social media presence. In addition, the Company also participated in four virtual and in person mining conferences throughout the year, which attracted the interest of a global investment audience.

On the exploration front, Vanstar's flagship Nelligan project continued to show very promising results from a 9,500-metre summer drill program. The 2021 drill campaign clearly demonstrated the resource is open and is expanding to the west, while the infill drill program continues to demonstrate continuity of mineralization improving the confidence of the existing resource at Nelligan. Drilling to the west was near surface and is providing a significant opportunity to further increase the mineralized envelope of Nelligan and add significant ounces to the gold resource (click for Press Release). Highlight holes (see Figure 1) released in December 2021 include:

In November 2021, Vanstar made a new addition to its project portfolio by signing an LOI with IAMGOLD to acquire 75% interest in the Bousquet-Odyno property (formerly referred to as Calder-Bousquet). 20,000 m of drilling has been completed on the property by IAMGOLD (click for Press Release). Highlights from the historical* drill program include:

* Note: the drilling results referenced above are historical and have not been independently verified and validated by the Company and should not be relied on.

Vanstar began exploration of its Felix property by completing a high-resolution magnetic survey on the entire property, an induced polarization survey focusing on the western portion of property, as well as drilling campaigns. Assay results from the drilling campaign initiated in the fall are pending (click for Press Release).

Additional claims were acquired on the Eva project due to positive results from a completed high resolution airborne magnetic survey which showed folded iron formations which are a good host for gold mineralization in this type of geological setting (click for Press Release). A prospecting and sampling campaign was conducted on the property in September with results pending. 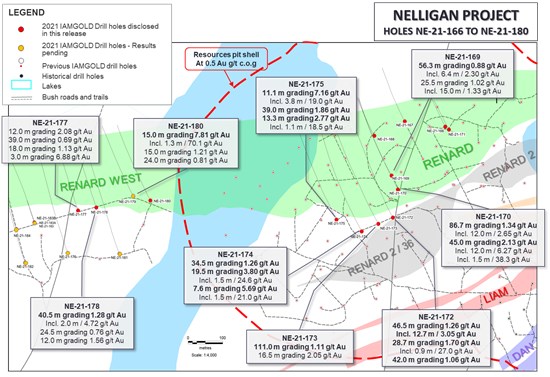 This press release was read and approved by Mr. Gilles Laverdière, consulting geologist and qualified person under the NI 43-101 Canadian standard.

Vanstar Mining Resources Inc. is a gold exploration company with properties located in Northern Québec at different stages of development. The Company owns a 25% interest in the Nelligan project (3.2 million inferred ounces Au, NI 43-101 October 2019) and 1% NSR. The Nelligan Project won the "Discovery of the Year" award at the 2019 Quebec Mineral Exploration Association Xplor Gala. Vanstar also owns 100% of the Felix property under development in the Chicobi Group (Abitibi mining camp, 65km East of Amex Perron property) and 100% of Amanda, a 7,306ha property located on the Auclair formation with historic gold showings up to 12.1 g/t Au over 3 meters.

To view the source version of this press release, please visit https://www.newsfilecorp.com/release/110349

Vanstar Mining Resources Inc. (TSXV: VSR) (OTCQX: VMNGF) (FSE: 1V8) ("Vanstar", or the "Company") is pleased to announce that it has commenced a 4,000 metres (m) drill program at the Bousquet-Odyno project. The Company has contracted Diafor Inc., who has mobilized a diamond drill rig to site and is currently drilling the first target. The drill program is designed to test additional areas near surface (see Figure 1) as well as test areas down plunge (see Figure 2) from known high grade zones. 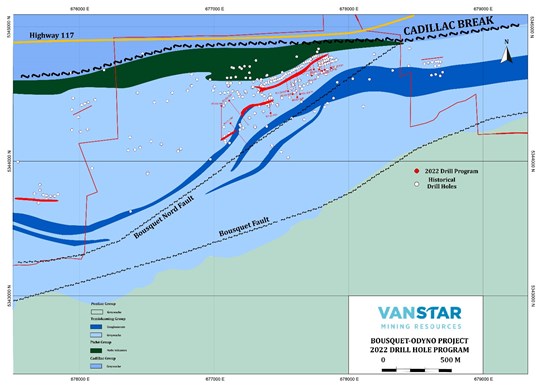 Vanstar Reports Remaining Assay Results from 2021 Drill Program at Nelligan - Confirms Mineralization up to 1.5 km to the West of Resource

Vanstar Mining Resources Inc. (TSXV: VSR) (OTCQX: VMNGF) (FSE: 1V8) ("Vanstar", or the "Company") is pleased to announce the remaining assay results from the 2021 diamond drill program consisting of 9,492 meters in 27 holes on the Nelligan joint venture project (IAMGOLD Corporation ("IAMGOLD"): 75%, Vanstar: 25%) completed by its partner IAMGOLD. The Company is reporting assays from the remaining 14 diamond drill holes totaling 5,232 meters completed in the western extension of the deposit. The 2020 drill program extended the mineralized zone by 700 m beyond the resource that was modelled in 2019. Current results from 2021 drilling, summarized in Table 1 and 2 below, indicate that the mineralization continues further to the west, although the zones appear to be thinning with locally improved grades. Hole NE-21-190, for example, located 1,100 m to the west of the current resource intercepted 9 m grading 3 gt Au and the most western hole (NE-21-188) intercepted 6 m grading 2.63 gt Au, 1.5 km from the 2019 pit shell.

Vanstar Mining Resources Inc. (TSXV: VSR) (OTCQX: VMNGF) (FSE: 1V8) ("Vanstar", or the "Company") is pleased to announce that, further to its announcement on November 29, 2021, it has entered into a definitive option agreement (the "Agreement") with IAMGOLD Corporation ("IAMGOLD") for the Bousquet-Odyno gold project (the "Property"). Under the terms of the Agreement, IAMGOLD has granted Vanstar an option to earn up to a 75% interest in the Property, which is comprised of 37 contiguous mining claims covering approximately 1,492 ha and is located directly south of highway 117 between the towns of Rouyn-Noranda and Malartic in the Province of Quebec.

Under the terms of the Agreement, which are substantially similar to those in the letter of intent, Vanstar has the option to complete as operator a minimum of $4M in exploration expenditures over 4 years and will have the right to earn up to a 75% interest in the Property, by completing the following steps:

Vanstar Mining Resources Inc. (TSXV: VSR (OTCQX: VMNGF) ("Vanstar", or the "Company") is pleased to announce that it has signed a letter of intent ("LOI") with IAMGOLD Corporation ("IAMGOLD") to acquire a 75% interest in the Calder-Bousquet property (the "Property") also referred as the Bousquet-Odyno project. The Property consists of 37 contiguous mining claims covering approximately 1,490 ha and is located directly south of highway 117 between the towns of Rouyn-Noranda and Malartic. The Property lies within the Abitibi greenstone gold belt, along the Cadillac break, a prolific gold bearing regional structure that has produced 100 million ounces of gold since 1900. Historical drilling on the property prior to IAMGOLD has identified a number of gold zones, including the Calder-Bousquet Zones No. 2, No. 4 and No. 5. Historical drilling has been relatively shallow, down to approximately 250 metres ("m").

From 2010 to 2016, IAMGOLD engaged in successive exploration programs including surface geological mapping and outcrop stripping to develop and refine structural controls relating to the historical gold zones, geophysics and geochemistry surveys to guide drilling programs and the completion of just over 20,000 m of diamond drilling to test historical gold zones and other exploration targets. Selected results from IAMGOLD's drilling programs include: