- Surge Battery Minerals Inc. (the "Company" or "Surge") (TSXV: NILI), (OTC: NILIF), (FRA: DJ5C) is pleased to report that it has finalized plans to acquire 38 mineral claims, located in Township 44 North, Range 65 East, Sections 13, 14, 23, and 24. The claims are valid and have been properly recorded with both the US Bureau of Land Management and the Elko County, Nevada Recorder.  The Company refers to this series of mineral claims as the Northern Nevada Lithium Project. 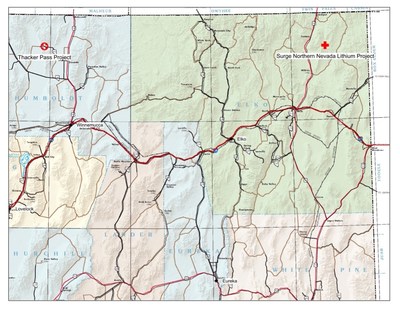 The terms of the mineral claim acquisition are as follows:

The Company agrees to pay Alan J. Morris (the "Vendor") the following consideration for the 38 mineral claims in Nevada :

(a)  making a cash payment to the Vendor in the amount of USD$12,000 immediately upon signing of the Agreement; and

(b)  issuing to the Vendor 250,000 paid and non-assessable common shares in the capital of Surge Battery Metals Inc. upon acceptance of the Agreement by the TSX Venture Exchange.

All securities in connection with the transaction are subject to a four month and a day hold period in accordance with applicable securities laws.

The Northern Nevada Lithium Project is located in the Granite Range about 34 line- km southeast of Jackpot, Nevada , about 73 line-km north-northeast of Wells , Nevada.  The target is a Thacker Pass or Clayton Valley type lithium clay deposit in volcanic tuff and tuffaceous sediments of the Jarbidge Rhyolite package.  The project area was first identified in public domain stream sediment geochemical data with follow up sediment sampling and geologic reconnaissance.

Momentum for this new program stems from Albemarle's recent announcement that it will commence exploration of clay and evaluate technology that could accelerate the viability of lithium production from clay resources in the region surrounding its Silver Peak lithium producing mine.  As reported by Albemarle on January 7, 2021

"Beginning in 2021, the company (Albemale) plans to invest $30 million to $50 million to double the current production at the Nevada site by 2025, making full use of its brine water rights.  Additionally, in 2021 the company plans to commence exploration of clay and evaluate technology that could accelerate the viability of lithium production from clay resources in the region.   As a leader in the lithium industry, our priority is to optimize our world-class resources and production. This includes Silver Peak, a site uniquely positioned as the only lithium-producing resource in the United States ," said Eric Norris , Albemarle President, Lithium. "This investment in domestic capacity shows that we are committed to looking at the many ways in which Silver Peak can provide domestic support for the growing EV market."

Greg Reimer , President & CEO comments " Nevada is well known for its lithium projects and lithium potential in both brine and clay-based mineral deposits.  We are very excited to have found some prospective ground in Nevada that shows some geological promise and strong initial lithium readings. Nevada is an area of focus for several mineral exploration companies including lithium producer ALBemarle Corporation (NYSE: ALB), and several prolific lithium explorers like Pure Energy Minerals (TSXV: PE) and Cypress Development Corp. ( TSXV: CYP). Over time, the Company is planning an additional staking program in the region to strategically add to our land position.  This new staking program will target known sedimentary horizons with potential for lithium bearing clay deposits."

Alan Morris , Lithium Claim Vendor and Lithium Project QP comments "Stream gravel in the anomalous samples consists of devitrified rhyolite tuff with occasional clasts of pumice.  In outcrop, air fall tuffs and tuffaceous lake beds are capped by strongly welded ash flow tuffs in a typical caldera related volcanic package.  Regional mapping has identified these rocks as being part of the Jarbidge Rhyolite is of a similar age and composition as the McDermitt Tuff that hosts the Thacker Pass deposit.  While the McDermitt Caldera is relatively intact structurally, basin and range faulting has offset and obscured the likely extent of the Jarbidge Caldera feature.   The immediate project area has not been the subject of modern detailed geologic mapping or age dating, so this interpretation is based on older 1:250,000 scale mapping and may be subject to revision as more data is collected."

Alan Morris , continues "The anomalous tuffs are preserved within a graben feature between a ridge of Paleozoic age sediments to the east with Paleozoic sediments intruded by the Contact Granite to the west. Younger felsic volcanic rocks related to the Bruneau- Jarbidge caldera fill the shallow valleys to the east and north.  The younger tuff has similar chemical characteristics to the McDermitt and Jarbidge tuffs and, based on regional public-domain geochemistry, is permissive for lithium mineralization."

The Serge Battery Metals Northern Nevada Lithium Project is a very early stage project with only limited stream sediment and rock chip sampling accomplished to date.   Results include two sediment samples with 1,980 and 1,540 ppm lithium.  Limited rock chip samples run up to 367 ppm Li but were not collected in the anomalous drainages.  Significant geologic and exploration work remains ahead to identify the source beds of the anomalous sediments. Plans are to initiate a grid soil survey and general geologic mapping to identify the favorable horizons for drill testing.

The Company is a Canadian-based mineral exploration company which has been active in the resource sector in British Columbia, Canada and Nevada , USA.

Neither the TSX Venture Exchange nor its Regulation Services Provider (as that term is defined in the policies of the TSX Venture Exchange) accepts responsibility for the adequacy or accuracy of this release. This news release may contain forward–looking statements which include, but are not limited to, comments that involve future events and conditions, which are subject to various risks and uncertainties. Except for statements of historical facts, comments that address resource potential, upcoming work programs, geological interpretations, receipt and security of mineral property titles, availability of funds, and others are forward–looking. Forward–looking statements are not guaranteeing future performance and actual results may vary materially from those statements. General business conditions are factors that could cause actual results to vary materially from forward–looking statements. 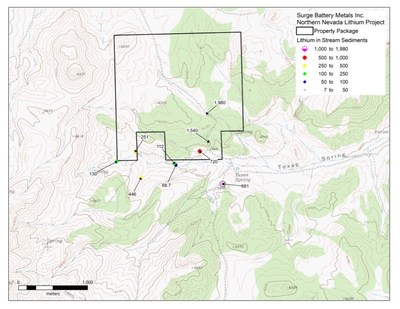 Critical Resources Limited (ASX:CRR) (“Critical Resources” or “the Company”) is pleased to announce further assay results from the drilling campaign at the Company’s 100%-owned Mavis Lake Lithium Project (“the Project”) in Ontario, Canada.

Lithium Investing in a Season of Volatility, Economic Uncertainty and Oversupply Fears

With recession fears, inflation and volatility dominating the investment landscape, navigating this tough economic season has become crucial for everyone.

For lithium investors, oversupply worries have added to the uncertainty, despite increasing optimism from lithium producers and stronger government initiatives to move away from fossil fuels to greener sources of energy.

During times like this, it can be challenging to make investment decisions, but there are also chances to find new opportunities and to get a better understanding of the dynamics and fundamentals of the lithium industry.

Hard-rock lithium explorer and developer Winsome Resources Limited (ASX: WR1; “Winsome” or “the Company”) is pleased to announce the discovery of a new pegmatite dyke as part of the recently concluded three-week field exploration program at the Company’s Adina project in Quebec.

Latin Resources Limited (ASX: LRS) (“Latin” or “the Company”) is pleased to provide the following update on resource definition drilling and other studies currently ongoing at the Company’s 100% owned high-grade Colina Prospect (“Colina”) (Appendix 1 and Figure 1).