Bravada Gold Corporation announces that it has received approval to add new drill sites to its existing permit for the Company’s 100% owned Wind Mountain goldsilver project in northwestern Nevada. Each site can be used for multiple drill holes, and three or four reverse-circulate drill holes are planned as the first relatively deep test of the interpreted feeder zone of this large hydrothermal system. Although a …

Bravada Gold Corporation (the “Company” or “Bravada”) announces that it has received approval to add new drill sites to its existing permit for the Company’s 100% owned Wind Mountain goldsilver project in northwestern Nevada. Each site can be used for multiple drill holes, and three or four reverse-circulate drill holes are planned as the first relatively deep test of the interpreted feeder zone of this large hydrothermal system. Although a drilling contract has been signed, a rig is not expected to be available until late November due to high demand for RC drill rigs. 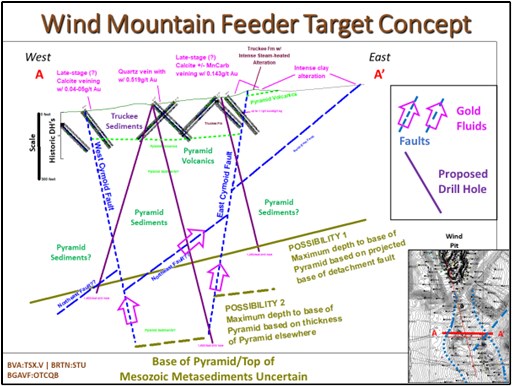 The Feeder target is interpreted as the “upwelling zone” of auriferous fluids that formed the disseminated gold/silver deposit previously mined by Amax Gold and the remaining Resources defined by Bravada. Evidence for the target concept is from Amax’s shallow condemnation drill holes and Bravada’s geological mapping, geochemical sampling, magnetic geophysics, and 2018/19 deep drilling nearby. Disseminated gold and silver mineralization on the Wind Mountain property is exposed over a strike length of +6km, indicating a robust gold system that spread laterally over the large area within permeable host sediments; however, a high-grade feeder has not been discovered to date and that is the objective of this campaign.

In other project news, assays for diamond drilling completed at Bravada’s Highland gold/silver project are still pending as assay labs continue to be backed up due to Covid-19 restrictions and delayed drilling programs that are now underway, which have overwhelmed assay labs. Assays are expected late in October or early in November.

The 2020 exploration program consisted of 427m of core in two holes and was funded by Option/Joint-Venture partner OceanaGold US Holdings Inc. (“OceanaGold”), a wholly owned subsidiary of OceanaGold Corp. OceanaGold may earn up to a 75% interest in the Project after expenditures of US$10 million following which Bravada will participate in joint-venture exploration and development on a 75/25% basis (for details, see News Release NR-09-18, December 20, 2018). The limited 2020 program was designed to test several CSAMT geophysical features believed to be potentially mineralized graben faults.

The Wind Mountain Property is in northwestern Nevada approximately 160km northeast of Reno in a sparsely populated region with excellent logistics, including county-maintained road access and a power line to the property. It is a historic past-producing, bulk-tonnage gold-silver mine. An independent resource estimate and Preliminary Economic Evaluation for Wind Mountain commissioned by Bravada in 2012 reported:

Mine Development Associates compiled the Technical Report and PEA. Thomas Dyer, P.E. is a Senior Engineer for MDA and is responsible for sections of the Technical Report involving mine designs and the economic evaluation, and Steven Ristorcelli, C.P.G., is a Principal Geologist for MDA and is responsible for the sections involving the Mineral Resource estimate. These are the Qualified Persons of the technical report for the purpose of Canadian NI 43-101, Standards of Disclosure for Economic Analyses of Mineral Projects. Details of the PEA produced by Mine Development Associates (MDA) of Reno can be found on SEDAR, as previously reported (see NR-07-12 dated May 1, 2012). Note that although the PEA was encouraging, it is preliminary in nature, it includes Inferred mineral resources that are considered too speculative geologically to have economic considerations applied to them that would enable them to be categorized as Mineral Reserves, and there is no certainty that the PEA will be realized.

Bravada is an exploration company with a portfolio of high-quality properties in Nevada, one of the best mining jurisdictions in the world. Bravada has successfully identified and advanced properties with the potential to host high-margin deposits while successfully attracting partners to fund later stages of project development. Three of Bravada’s ten Nevada properties are being funded by partners. Bravada’s value is underpinned by a substantial gold and silver resource with a positive PEA at Wind Mountain, and the Company has significant upside potential from possible new discoveries at its exploration properties.

Since 2005, the Company signed 32 earn-in joint-venture agreements for its properties with 19 publicly traded companies, as well as a similar number of property-acquisition agreements with private individuals. Bravada currently has 10 projects in its portfolio, consisting of 764 claims for approximately 6,100 ha in two of Nevada’s most prolific gold trends. Most of the projects host encouraging drill intercepts of gold and already have drill targets developed. Several videos are available on the Company’s website that describe Bravada’s major properties, answering commonly asked investor questions. Simply click on this link http://www.bravadagold.com/en/management-videos.php.

Joseph Anthony Kizis, Jr. (AIPG CPG-11513, Wyoming PG-2576) is the qualified person responsible for reviewing and preparing the technical data presented in this release and has approved its disclosure.

On behalf of the Board of Directors of Bravada Gold Corporation

This news release may contain forward-looking statements including but not limited to comments regarding the timing and content of upcoming work programs, geological interpretations, receipt of property titles, potential mineral recovery processes, etc. Forward-looking statements address future events and conditions and therefore involve inherent risks and uncertainties. Actual results may differ materially from those currently anticipated in such statements. These statements are based on a number of assumptions, including, but not limited to, assumptions regarding general economic conditions, interest rates, commodity markets, regulatory and governmental approvals for the company’s projects, and the availability of financing for the company’s development projects on reasonable terms. Factors that could cause actual results to differ materially from those in forward looking statements include market prices, exploitation and exploration successes, the timing and receipt of government and regulatory approvals, and continued availability of capital and financing and general economic, market or business conditions. Bravada Gold Corporation does not assume any obligation to update or revise its forward-looking statements, whether as a result of new information, future events or otherwise, except to the extent required by applicable law.

To view the source version of this press release, please visit https://www.newsfilecorp.com/release/66892