Midnight Sun Mining Corp.  has received notification from Rio Tinto Mining and Exploration Limited that the initial 2021 exploration campaign on Midnight Sun’s Solwezi Licences has resumed after temporarily pausing at the end of June. This exploration work is being performed pursuant to the terms of the previously announced Earn-In and Joint Venture Agreement .Exploration work to date has been focused on gaining a …

Midnight Sun Mining Corp. (TSXV: MMA) (the “Company” or “Midnight Sun”) has received notification from Rio Tinto Mining and Exploration Limited (“Rio Tinto”) that the initial 2021 exploration campaign on Midnight Sun’s Solwezi Licences has resumed after temporarily pausing at the end of June. This exploration work is being performed pursuant to the terms of the previously announced Earn-In and Joint Venture Agreement (the “Earn-In Agreement”) (see the Company’s news release dated April 27, 2020).

Exploration work to date has been focused on gaining a deeper geological understanding of the Solwezi Licences within the broader context of the various geological models hosting the significant copper mines in the area.

“Most of the mineralization on the Solwezi Licences occurs under a 40 to 50 metre thick layer of groundcover and there are very few occurrences of outcrop,” stated Al Fabbro, President and CEO of Midnight Sun. “With this cover, along with the sheer size of the 506 square kilometre land package, we share Rio Tinto’s view that the regional component, while time consuming, is a very necessary step in the exploration process to define and delineate target areas for drilling and potential development.”

Upon returning to the field, the exploration program is expected to include work at Dumbwa, Likoka and Mawemba. 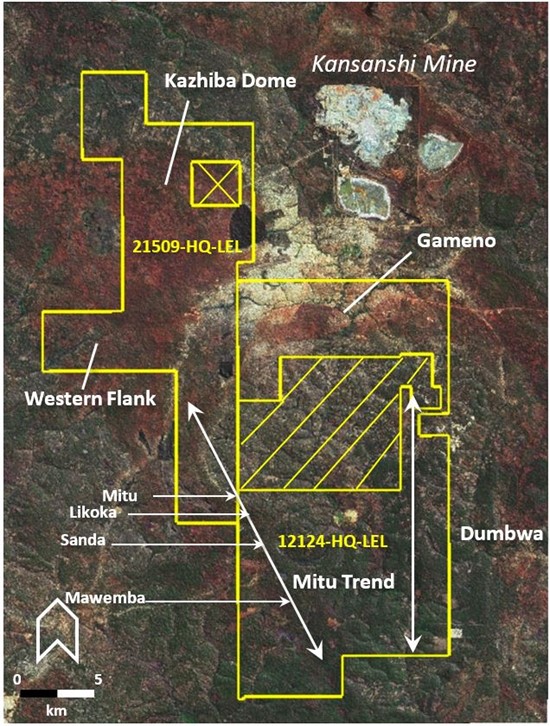 To view an enhanced version of this graphic, please visit:
https://orders.newsfilecorp.com/files/2553/96084_image1.jpg

Dumbwa is a 20 kilometre copper-in-soil anomaly overlying basement rock where previous drilling encountered disseminated chalcopyrite and bornite with certain similarities to Barrick’s Lumwana Mine, which is approximately 60 kilometres west of the Solwezi Licences. The best hole to date at Dumbwa was drilled by a previous operator and intercepted 1.24% Cu over 16 metres starting at a depth of 164 metres (SDRC-13). The planned program includes infill soils, air core drilling, reverse circulation drilling and diamond drilling to test possible mineralization in magnetic, radiometric, and induced polarization geophysical responses.

Mawemba is a geophysical anomaly along the Mitu Trend which has returned positive geochemical and air core drill results similar to the original Mitu discovery area. Diamond drilling and an expanded soil survey are planned for the Mawemba target area.

Diamond drill hole MDD-17-15 was initially drilled as a >3.7 kilometre step out from the discovery at Mitu, in the area now called Likoka, and measured 4.23% CuEq over 11.6 metres (see the Company’s news release Midnight Sun Drills 4.23% Copper Equivalent over 11.6 Meters, dated July 4, 2017). The upcoming work will tighten geochemical spacing and increase air core drill coverage of the area in preparation for a diamond drill campaign.

“I am very excited about Midnight Sun’s immediate future, and believe that Rio Tinto’s detailed, systematic approach to exploration at Solwezi is what will ultimately identify the full potential of the licence area,” said Mr. Fabbro. “The next few exploration programs will be the most important in the Company’s history and as our understanding of these licences continues to grow, so do our chances of success.”

Qualified Person: Richard Mazur, P.Geo., a Director of the Company and a Qualified Person under NI 43-101, has reviewed and approved the technical data and contents of this release.

ON BEHALF OF THE BOARD OF MIDNIGHT SUN MINING CORP.

To view the source version of this press release, please visit https://www.newsfilecorp.com/release/96084